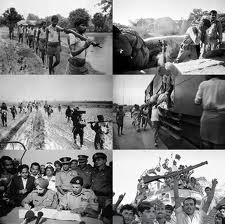 The Bangladesh government is likely to take the remains of the slain soldiers and try to protect the graveyards with the help of India, the official said.

A two-day meeting of officials of Bangladesh and India began in the city to discuss, among other issues, the identification of the burial spots of th 1971 Liberation War.

“If Bangladesh officials give us the list of the graveyards, we would definitely try to locate those places,” Gitte told IANS.

During the nine-month long (March-December) war in 1971 which created an independent Bangladesh from East Pakistan, many Bangladeshi soldiers and ‘muktijoddhas’ (freedom fighters) who died fighting against Pakistan were buried in the Indian territory.

The Liberation War, as it is called in Bangladesh, later turned into a full-scale India-Pakistan war, culminating in fall of Dhaka and surrender of over 97,000 Pakistani soldiers to the Indian troops in December 1971.

About 80 percent of the 856-km-long India-Bangladesh international border in Tripura has so far been fenced.

“More than 61 patches of the India-Bangladesh border with Tripura could not be fenced following objections by border villagers,” a Border Security Force (BSF) spokesperson said.

“The Bangladesh government also has been objecting to the fencing at the zero line,” he told IANS.

The Tripura government asked the central government to build fences at the actual border (zero line) with Bangladesh to keep border markets, human habitats, roads and government set-ups inside the fencing.

Officials of the BSF, Border Guard Bangladesh and Bangladesh police and customs were also present in the meeting.—IANS.