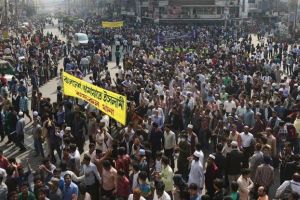 Dhaka, May 12 : A top leader of an Islamist party in Bangladesh was Sunday arrested for crimes against humanity allegedly committed during the country’s war of liberation in 1971.

The war crimes charges include looting, arson, deportation of people and killing of 700 people in six incidents of genocide in 1971.

Yusuf was also serving as acting chief of the party after the detention of its chief, Ameer Motiur Rahman Nizami, on charges of war crimes.

The International Crimes Tribunal-1 issued the arrest warrant following the prosecution’s plea to arrest Yusuf, who allegedly founded the Razakars, an auxiliary group of the then Pakistan army.

The tribunal also ordered police to present Yusuf before it May 26.

During the day’s proceedings, the tribunal took into cognizance 15 charges brought against the Jamaat leader.

Yusuf was a regional cabinet member of the last Pakistan administration in the then East Pakistan.

In January, Islamist leader Ghulam Azam, aged 89, was arrested on charges of masterminding war crimes during the 1971 liberation struggle.

Prosecutors said Azam, the former chief of Jamaat, is alleged to have created and led pro-Pakistan militias which carried out numerous murders and rapes during the nine-month war.

But it has been plagued by criticism for targeting her political opponents from former prime minister Khaleda Zia’s Bangladesh Nationalist Party (BNP) and its key ally Jamaat.

Both BNP and Jamaat have dismissed the court as a government “show trial” and said it is a set-up with no UN oversight or involvement.

Muhammad Kamaruzzaman, another Jamaat leader, was sentenced to death earlier this week for war crimes including mass killings.

Last week, the International Crimes Tribunal-2 issued arrest warrants against Chowdhury Mueen-Uddin and Ashrafuzzaman Khan on charges of killing 18 intellectuals at the end of the war.

The Bangladesh government says about three million people were killed in the liberation war although independent researchers say between 300,000 and 500,000 died.—IANS.