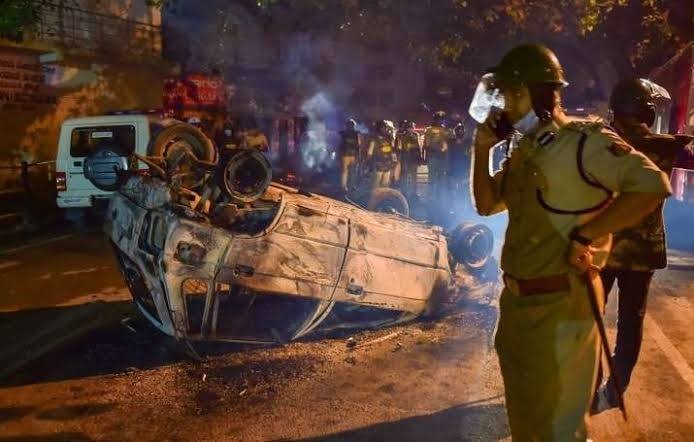 BENGALURU—A fact-finding committee formed by several Bengaluru based civil society organisation (CSOs) has blamed  inaction by Facebook and the City Police for the communal violence  that took place t the streets of East Bengaluru   on August 11.

The Bengaluru City police are probing the incident  in which four were killed in police firing and several were injured.

“The intelligence failure to predict and prevent the violence must be investigated,” the committee has strongly demanded in its report on the violence that ensued on the night of August 11th, 2020 titled ‘Communalising Violence in DJ Halli’.

“This report brings out several truths. This report is not the end, on its authority, we must inquire into the truth and find out who is behind the violence, and who all failed to act. There are people who profit from the riot as well. We must find out those who are responsible. We must further tolerance,” said (Retd.) Justice H.N. Nagmohan Das.

Adding to this, senior journalist Indudhara Honnapura said, “There was an opportunity to stop this, but Police failed to do so. Everyone, including the police, knew this is a sensitive area. There are many good officers, but I do not understand why they did not send sufficient police force to control the incident. Why didn’t the government provide information to the police?”

“Facebook has failed to act against Naveen’s post which amounts to hate speech. Besides the local police too showed laxity in handling the situation as a result of this, situation went out of their (Police) control,” the report alleged.

The committee further stated that there was an intelligence failure in the state machinery’s reaction to the incident, the police were responsible for a delayed response in registering the FIR against Naveen, which resulted in a discontent crowd swelling at the stations.

“This is a local and spontaneous incident that has been taken advantage of by different political parties for immediate political gains which included the upcoming corporator elections in the state,” the committee observed.

“The police have carried out several arbitrary arrests in the middle of the night, which has created an atmosphere of fear in the areas. The families of those arrested have not been informed of the arrest or whereabouts of their loved ones,” the report stated.

The committee claimed that a larger agenda of total criminalisation and demonisation of the entire community has also been noted.

Besides this, the report also came down heavily on the several sections of media which have misportrayed the incident in a communal light by spinning conspiracy theories and targeting the Muslim community.

The fact-finding committee claimed that it inferred several facts on the incident, after a thorough inquiry into the incident, documenting several testimonies, and gathering evidence from all those involved across the spectrum.

Alleging police inaction, the committee observed that the cops failed to act swiftly and effectively on the post when small delegations approached the police station and to intervene in effective ways to prevent the violence from escalating in the areas.

The report added that the perceived delay in lodging the FIR, and the failure to assure firm legal action and the perception that this was due to the MLA’s intervention cannot be ignored.

The imposition of prohibitory orders under Section 144 (of the Code of Criminal Procedure) has been termed a ubiquitous punishment to those in the areas, who allegedly met with verbal and physical abuse when they attempted to leave their homes.

The fact-finding team was comprised former chairperson of the Karnataka State Commission for Protection of Child Rights Nina Nayak, independent journalist Cynthia Stephen and 21 others including lawyers, civic activists, representatives of various CSOs and policy researchers a” has urged the state government to form peace committees including all communities to restore peace in the areas.

Earlier about two weeks ago another fact finding report was submitted by ‘Citizens for Democracy’, a platform of responsible citizens – which reportedly has a backing of the Rashtriya Swayam Sevak Sangh claims to be committed to democratic values, safety and security of the citizens of India – had termed that the riots were pre-planned and organised and it was undoubtedly communally motivated.