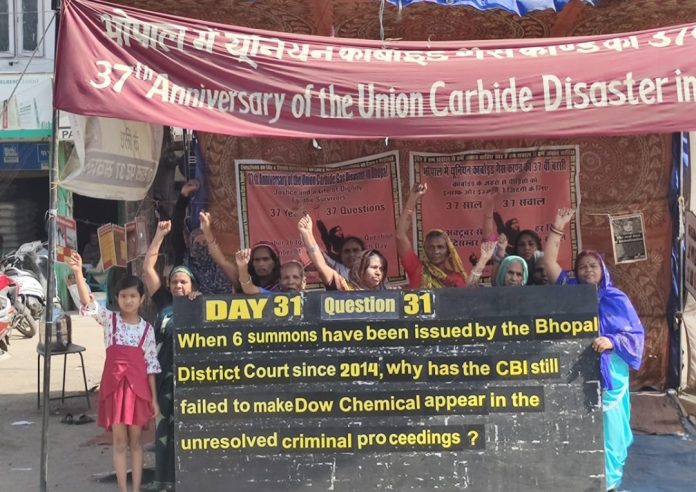 By Pervez Bari
BHOPAL – On the 31st day of their 37- day campaign, the survivors of the 1984 Union Carbide Gas Disaster sought answers from the Central Bureau of Investigation, (CBI), prosecutor of the criminal case on the Bhopal disaster. They asked: “Why has the CBI failed to make Dow Chemical appear in the ongoing criminal proceedings on the disaster in the Bhopal District Court despite six summons issued by the Court since 2014?
In 2001, The Dow Chemical Company (TDCC), USA took over Union Carbide USA (while it was absconding Indian courts). As per Indian and US laws, along with the assets of Union Carbide, USA, Dow Chemical also took over civil, criminal and environmental liabilities of the Union Carbide in Bhopal.

Between 2014-2019, the Bhopal District Court has issued five summons to The Dow Chemical Company (TDCC), USA to produce the proclaimed absconder accused Union Carbide Corporation in the criminal trial of the December 1984 Bhopal disaster. These notices have been issued under the Mutual Legal Assistance Treaty (MLAT) which provides for the Indian government (CBI & Ministry of Home Affairs) to ask US agencies (Department of Justice) to ensure that notices are served on Dow  Chemical, USA. “In the last 7 years, Dow Chemical has repeatedly ignored the notices of Bhopal District court and CBI has shown a spineless response in making Dow Chemical obey Indian laws.

“We do think it is by design that CBI is behaving the way it is. In 2015 our Prime Minister chose to offer a lavish dinner of Indian fusion delicacies to the CEO of Dow Chemical, Andrew Liveris. It is reprehensible to see our  Prime Minister hosting the CEO of a Dow Chemical, a US multinational like Union Carbide, which has been defying the Indian justice system while continuing to make millions of dollars as profits through its business in India.”, says Rashida Bee, president of the Bhopal Gas Peedit Mahila Stationery Karmchari Sangh

In November 2021, CBI reached out to US authorities and has sought assistance under the MLAT in retrieving deleted data from the e-mail and social media accounts of actor Sushant Singh Rajput suicide case.

“In Bhopal gas disaster case, CBI has not even taken a tiny step in ensuring that the corporations & its officials responsible for killing more than 25,000 people and injuring more than half a million are brought to book. The PM should tell us if the murder of our loved by Union Carbide is no longer considered a crime”, asks Savitri Bai who lost her husband on the night of the disaster.

“We hope that our Prime Minister instructs the CBI to go hard against this criminal company that is sheltering killer Carbide. “He has spoken about Bhopal gas victims not getting justice under the Congress regime but the current BJP regime has done everything in its power to protect the interest of the killer corporations”, said Rachna Dhingra of Bhopal Group for Information & Action.

Through the Campaign – “Bhopal Disaster : 37 years ; 37 questions” – the organizations wish to highlight urgent concerns regarding compensation, criminal justice, medical, economic and social rehabilitation and environmental remediation of polluted lands that need to be addressed to stop the on-going disaster.