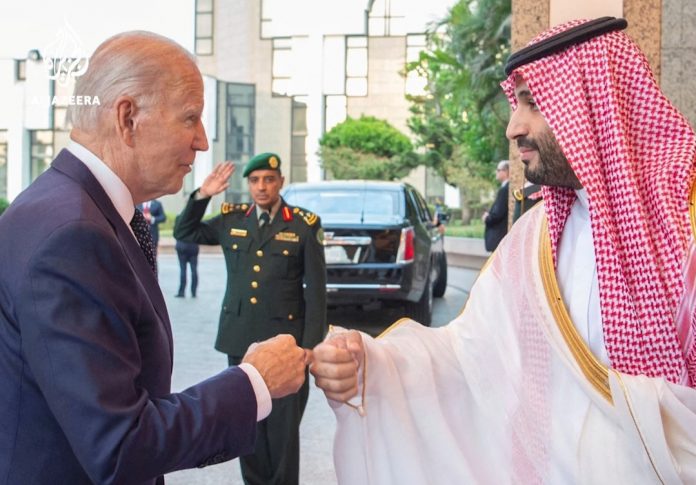 Joe Biden’s west Asian tour should have been utilised to reset the American ties with different regional players and lay foundations for a more robust engagement but the results seem to be rather disappointing.

American President Joe Biden was on a four-day trip to Israel and Saudi Arabia, his first trip to the Middle East since taking office last year, with a lot of expectations about resetting the ties with Saudi Arabia and also giving a new direction to US policies in the Middle East.

The visit started with meetings in Israel to expand security ties and discuss Iranian belligerence in the region. He next went to Jeddah, Saudi Arabia, where he attempted to reassure regional leaders – and the rest of the world – that his administration remains committed to actively engaging in the Middle East and counter any Russian or Chinese plans to expand their geopolitical influence.

US-Saudi ties
Coming in the backdrop of the continuing Russia-Ukraine war and spiralling global oil prices, the visit was also seen as a rapprochement by the U.S. President to the Saudi Crown Prince Mohammad bin Salman (MbS), whom he blamed for the assassination of Saudi journalist Jamal Khashoggi, and thus pave the way for softening the Saudi stance on increased oil production.

However, the manner in which the two leaders greeted each other with a fist bump has been criticised both by fellow Democrats and Republicans, due to its undiplomatic nature and also as a middle ground to thaw the ice, perhaps on the advice of their key lieutenants.

Also the version given by Biden and Saudis as to whether the President admonished MbS seem to vary, thus indicating that the President was ready to give up his old stance for the Saudi agreement to increase its oil production, though ultimately he got no such assurance.

The meetings in Jeddah largely seemed to go along with the planned reset of the U.S. relationship with the kingdom, and Biden announced several new areas of cooperation aimed at reshaping US-Saudi relations.

However, the President did strike an optimistic note that regional leaders would soon take action given that the next OPEC meeting will take place in early August, after his parley with the Gulf Cooperation Council (GCC) leaders in Riyadh.

U.S.-Iran Ties
Biden is also under pressure to counter Iran’s growing influence in the region, and during the visit he made a commitment to the U.S. playing a large role in the Middle East for years to come.

In Israel, Biden repeatedly vowed to ensure that Iran does not acquire a nuclear weapon and said he believed diplomacy remained the best avenue to keep Tehran from obtaining one.

Biden has pushed for a revival of the Iran nuclear deal, which former president Donald Trump withdrew the US from in 2018, as he faces increasing pressure from key Middle East allies to produce a plan to contain Iran. But hopes appear to be fading that a deal will materialise, and the President acknowledged that the U.S. is “not going to wait forever” for a response from Iranian leadership.

U.S.-Israel ties
America’s relationship with Israel has also been strained in recent years. Obama and former Israeli President Benjamin Netanyahu shared a strained relationship over Palestine, and the 2015 nuclear deal with Iran also soured the relations.

But the Biden administration’s renewed efforts to re-implement the Iran nuclear deal, coupled with warnings over Israel’s expansion of settlements in the West Bank, have further complicated U.S. -Israeli relations again.

In addition, U.S. is also worried about the growing Russian and Chinese influence in the region. Iran has cosied-up to Russia significantly in recent years and the Chinese have made themselves more useful both to the Saudis and Emiratis in defence and trade sectors.

The new approach
His critics say that Biden to an extent continued with the old American baggage. And if he really wants to rest the American foreign policy for West Asia and its Arab allies, it will have to adopt a more proactive and less preaching stance with a new perspective, too. Biden himself said during the trip that he continues to believe that diplomacy is the best way to achieve a new outcome.

But to achieve that outcome, he’ll have to pursue soft-diplomacy also. Additionally, the U.S. should try to give-up the mentality to solve every problem or conflict with military means and tactics, instead it should try to focus and see the alternative opportunities available to help the people of the Middle East achieve greater freedom and prosperity which they desire.

For this, the renewed American focus should prioritise its interests through better security management for itself and its allies. Ensuring that terrorist threats from the Arab world should remain a focus of U.S. engagement in the region.

Further, it should focus on economic welfare of the region. The Middle East’s energy resources remain critical to the global economy. In addition, the U.S. should try to foster lasting economic ties with emerging centres of innovation in the region.

Additionally, it should focus on values and rights, which the United States supports i.e. religious freedom, women’s rights, and freedom of expression. These should be promoted through its soft diplomacy or public diplomacy channels. There is a huge aspiration amongst the people of the region to fill-up the chasm between what is available and what they wish for, ensuring dignity and prosperity for all.

At the same time, it should try to engage more with the young generation amongst the Arabs, the 13th edition of the Arab Youth Survey found that over 90% of Saudi youth, who form nearly two-thirds of the country’s population, see the U.S. as an ally. This should be its target audience

It should focus on boosting bilateral ties in new areas such as tourism, information technology, and clean energy and focus less on energy sector.

It should launch joint initiatives on human security challenges such as in the health sector, economic security, human rights, and climate change. It should engage in renewed diplomatic efforts to end conflicts in Syria, Yemen, and Libya. Try to contain and engage Iran with diplomacy backed by a balanced regional security strategy. Renewed diplomacy with Iran must include America’s regional security partners in order to produce lasting results. It should strive for greater regional integration with renewed and inclusive diplomacy on the Arab-Israeli front, too.

Overall, the visit failed to accomplish what Biden wanted to achieve in the region, and for any success the U.S. will have to fully recalibrate its policy towards the Middle East, Iran and Israel in the short-term for long-term gains and keeping the Russians and Chinese at bay in the region.
***
Asad Mirza is a political commentator based in New Delhi.
www.asad-mirza.blogspot.com