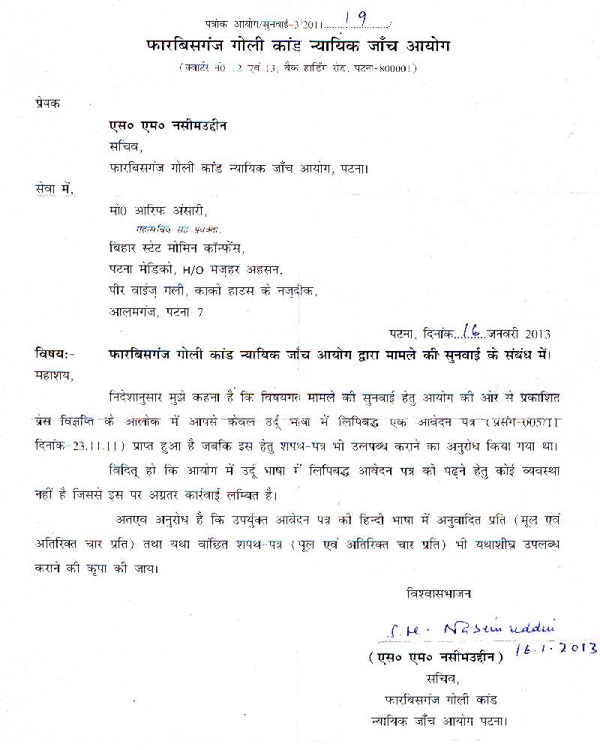 In a big disclosure, the Judicial Enquiry Commission, set up by the Nitish Kumar government in June 2011 to look into the Forbesganj police firing, is not accepting applications from victims or Muslim organizations written in Urdu language.

“This exposes the true status of Urdu, the second official language of Bihar. Soon after the language was granted the status in 1980s, the state government had notified that all offices should have an Urdu translator. But this is just on paper,” Mr. Arif Ansari told Muslim Mirror.

He expressed surprise and anguish over the fact that the Forbesganj firing judicial commission has not been given Urdu staff even when the commission is looking into a case which is related to the Muslim community.

“All the victims of Forbesganj firing are Muslims; in fact, the entire village is dominated by Urdu speaking Muslim community. Besides, several Muslim organizations have shown interest to appear before the commission seeking justice for the victims. Yet, the state government has not provided an Urdu translator to the commission,” Mr. Ansari added.

He also lambasted the slow pace of the commission. “The commission was given six months to submit its enquiry report, but around two years have passed, there is no trace of the report,” said Mr. Ansari.

“The commission has been set up by the government just to befool the public. They are delaying deliberately so that the victim families forget it and culprits are not brought to book,” said Mr. Arif Ansari.