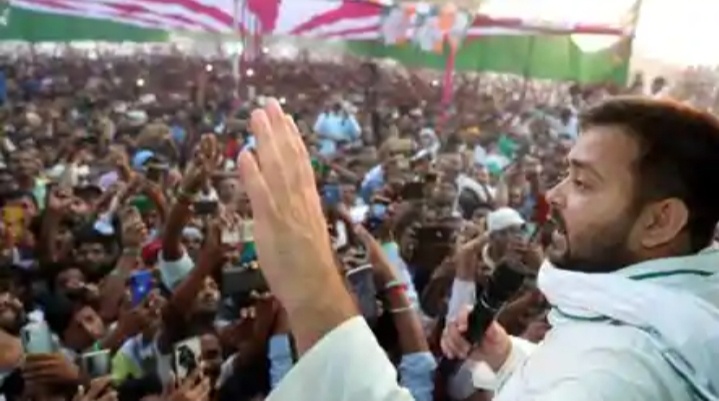 Most exit polls, conducted after the final phase of the Bihar assembly elections, have shown the Rashtriya Janata Dal (RJD) led Grand Alliance (Mahagathbandhan) ahead of the ruling National Democratic Alliance (NDA). There is a wave of obvious joy in the leaders/workers of the Grand Alliance. Democratic and secular civil society activists, writers, artists, intellectuals plagued by RSS/BJP fascism are also hopeful that the Bihar election results will create some breathing space. Results will come on 10 November. Even in the event of the Grand Alliance’s victory over the NDA, there is not going to be any deep blow to the status quo that has taken root in the state of Bihar. It is far from being a blow on ‘Modishahi’ in the country or ‘Trumpshahi’ (despite Donald Trump’s defeat in the presidential election) in the world. In 2015 too, the Grand Alliance had won the Bihar Assembly elections. The reality of that, including the 2019 Lok Sabha elections, is for everyone to see. The parties involved in the Grand Alliance have to fight against each other in other states and in the 2024 Lok Sabha elections.

Despite all this, the Bihar election has a special significance. Let us deliberate on its deeper impact and lesson.

This election has taken place under the specter of Corona epidemic. The opposition had made a  demand from the Election Commission to postpone the election. But the Bharatiya Janata Party (BJP) was in favor of elections on time. Its strategists equipped with digital methods of publicity, government tools and economic resources were assuming a walkover in case of election during the crisis period. The strategy prepared for the Bihar election included the plan to dispose of Nitish Kumar simultaneously. The BJP was convinced that it would get more seats than the Janata Dal United (JDU). Describing the result as a decision of the people of Bihar to change the leadership they will appoint the first Chief Minister of BJP in the state. Having half of seats in seat sharing exercise; deploying the son of late Ram Vilas Paswan on the front to further damage Nitish Kumar’s credibility; proclaiming Tejashwi Yadav and Rahul Gandhi as crown prince of Jungle Raj; referring to Ram temple in Ayodhya, Section 370 in Kashmir, Citizenship Act by the Prime Minister himself  right up to labeling the leaders of the Grand Alliance supporters of the ‘Tukde-tukde gang’ – there were several arrows in the BJP’s quiver that were supposed to demolish the  opposition. It was also heard in the election discussions that the BJP’s strategy was working in tandem with the alliance of Owaisi and Mayawati in the Bihar election.

But in a swoop, the Grand Alliance, which sought to postpone the elections, came into a state of tough competition. In the meetings of Tejashwi Yadav, the candidate of chief minister of the Grand Alliance, more crowds were estimated than the meetings of the Chief Minister and the Prime Minister. Even ‘godi media’, had to be compelled to acknowledge the crowds gathered at the meetings of Tejashwi. The pre-planned strategy of the BJP appeared vanquished in front of the record election rallies held by an  Tejaswi who seemed on a roll. Not only Chief Minister Nitish Kumar, popularly known as ‘Sushasan Babu’, started to feel helpless, the Modi-style of winning elections – built with  a mixture of the majority communalism and untenable promises of development – also seemed to be in trouble. The strategists panicked and tried to make the atmosphere in their favour by making announcements like giving 19 lakh jobs and distributing free vaccines of Corona virus. But, the election had gone out of the grip of their per-mediated strategy.

This shocking blow to the ruling government power at the center and in the state was mainly due to the inherent strength of democracy. Other factors counted by electoral pundits are auxiliary. In this sense, the election of Bihar has a special significance. This significance is equally meaningful and relevant even in the event of defeat of the Grand Alliance.

Needless to say that the great saga of India’s democracy is full of sorrows and irony. Here, whoever comes to power due to the greatness of democracy, is bent on strangling it. The dictatorial tendency of parties and their leaders to stick to power by hook or by crook has deeply distorted Indian democracy. Their greed for power lured them to pass on the same in the hands of their descendants even after death. Peoples’ flattering mentality of the feudal and colonial eras waters the roots of this negative aspect of democratic spirit. In fact, this sequence started soon after independence.

It was a natural expectation from the backward/Dalit/tribal leaders that they would prove to be the biggest keepers of democracy, and would infuse a new life in its shattered physique. But such a mature leadership has not been revealed yet. It is to be hoped that the leaders who were placed by the elegance of democracy in a strong position against the ruling coalition in Bihar elections, will not misbehave with democracy as before.