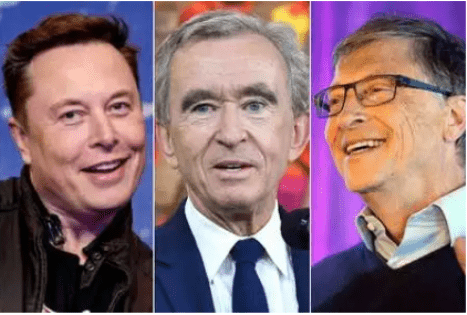 The world  witnessed a lot of surprise during COVID-19 pandemic, be it socio- economic political  related to health or  education . The year 2020 was full of hustle as such. Although majority of the people especially working class faced huge crisis. However during this pandemic the world’s billionaires “did extremely well” and they became richer and almost 500  hundreds  new billionaires joined list of billionaires club.

According to a report of Swiss bank UBS, billionaires increased their wealth by more than a quarter (27.5 percent) during the peak of the crisis from April to July, when millions of people around the world lost their jobs or struggled to survive on government assistance.

The reports, found that billionaires had mostly benefited from betting on the recovery of global stock markets when they were at their lowest during the global lockdowns in March and April. UBS said billionaires’ wealth had hit “a new high, surpassing the previous peak of $8.9tn reached at the end of 2017”. The number of billionaires has also hit a new high of 2,189, up from 2,158 in 2017.

As the US crossed the threshold of half a million deaths from the Covid pandemic, the nation’s billionaires continued to reap extraordinary financial gains.  After 11 months of pandemic misery, where millions lost their jobs, health and wealth, total US billionaire wealth increased $1.3 trillion since mid-March, 2020, that is an increase of 44 percent.

The COVID-19 pandemic has triggered an economic crisis of a magnitude not seen since the Great Depression. In the early months of the pandemic, as local businesses across the country closed, tens of millions of people lost their job. Now, more than half a year later, more than 11 million remain unemployed and many shops and restaurants still face crises.

The recession ushered in by the novel corona virus has not meant economic catastrophe for everyone, however. Talking about the United States, in fact, in the months since the virus reached the States, many of the nation’s wealthiest citizens have actually profited handsomely. Over a roughly seven-month period starting in mid-March – a week after President Donald Trump declared a national emergency – America’s 614 billionaires grew their net worth by a collective $931 billion.

Covid-19 hasn’t slowed the rise of billionaires, who have multiplied at an alarming rate in the last year. This year, a record 493 people were added to Forbes’ World’s Billionaires list, implying that the world has gained a new billionaire every 17 hours since Forbes last took a snapshot of billionaire wealth on March 18, 2020.No country put more names on the Forbes list this year than China, which gained 205 new billionaires (as speculated in one of my articles that world economy is going to become China centric).The list Followed United States which had second highest number of billionaires.

The number of newly minted and reissued billionaires soared last year, Forbes reported Tuesday in its annual ranking, a staggering accumulation of personal wealth that stands in sharp contrast with the widespread economic struggles unleashed by the coronavirus pandemic.

The number of billionaires on Forbes’ 35th annual list increased by 660 to 2,755, a roughly 30% increase from the previous year, with 493 of them being first-timers. Seven of the eight are wealthier than they were prior to the pandemic. Forbes calculates net worth using March 5 stock prices and exchange rates.

Then there are the cryptocurrency billionaires. With cryptocurrencies booming once more- Bitcoin increased 800% between mid- March 2020 and mid-March 2021, while Ripples XRP increased 200%. Nine new members of three-comma club have emerged. The richest person is 29 year old Sam Bankman –Fried, the founder of two crypto firms who has amassed a $8.7 billion fortune. Alameda, his quantitative trading firm, manages $32 billion in bitcoin and other cryptocurrencies, as well as other derivatives. He also founded the FTX exchange, which achieved unicorn status less than a year after its launch in January 2020.The majority of his wealth is invested in FTX’s equity and FTT tokens.

Another route to riches that was especially lucrative during the pandemic was that of health care. Around 61 new billionaires were found from healthcare field this year. And at least 40 join the ranks owing to the involvement in the global fight against Covid-19 pandemic.

A similar trend and tendency came to be seen in India also, where on one side India was badly affected by the pandemic however on the other side, India too added to the Billionaires list. Forty Indians entered the billionaires’ club in the pandemic-stricken 2020 to take the number of those in the coveted list to 177 people, a report said.

Mukesh Ambani continued to be the wealthiest Indian with a net worth of $83 billion. The head of Reliance Industries witnessed a 24% jump in fortunes and climbed up one spot to be the eighth richest globally, as per the one of the Global Rich List.

Thus one face of pandemic worked in favor of some people. As such, world saw a huge increase in the number of billionaires and the thing still continues.