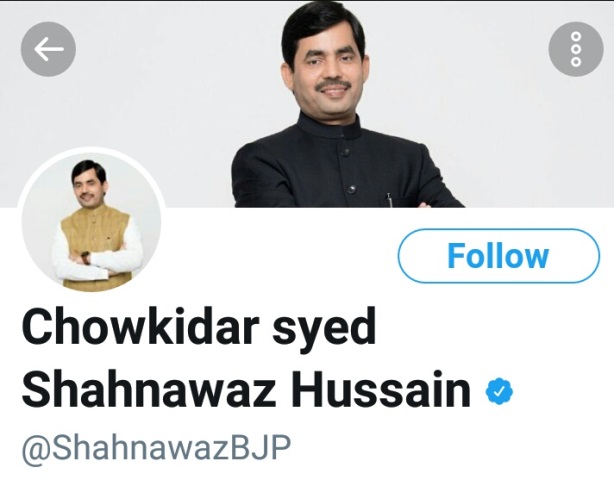 New Delhi : BJP has ignored its trusted  ‘Chowkidar’ Shahnawaz Hussain, the national spokesperson of the party , who lost marginally from Bhagalpur during 2014 LS poll.

The party has  denied a ticket to him although he has been the most loyal Chowkidar throughout his entire political career.

Hussain has been very loyal to the party despite being almost sidelined in the last five years of the Narendra Modi government and not considered for Rajya Sabha after defeat in the 2014 Lok Sabha seat unlike many losers of the party like Smriti Irani and Arun Jaitley who were given the portfolio of cabinet minister..

Since the defeat from Bhagalpur in the 2014 Lok Sabha elections, he had based himself in the Bihar district and had been appearing in public and private events in order to maintain contacts with voters. He was hoping to get ticket again from the seat but his party has denied him ticket.

After Prime Minister Narendra Modi and party chief Amit Shah added the word ‘Chowkidar’ in the beginning of their name on social media like Twitter, several BJP leaders including Hussain had also added the word to their name, but all in vain.

“I continue to enjoy the faith of BJP Karyakartas and senior leaders including blessings of BJP National President @AmitShah ji. My party has always kept faith in me & previously given me tickets in 6 Lok Sabha Elections. I may not be contesting elections this time but will put in all my efforts to once again make @narendramodi ji the PM of our great nation,”