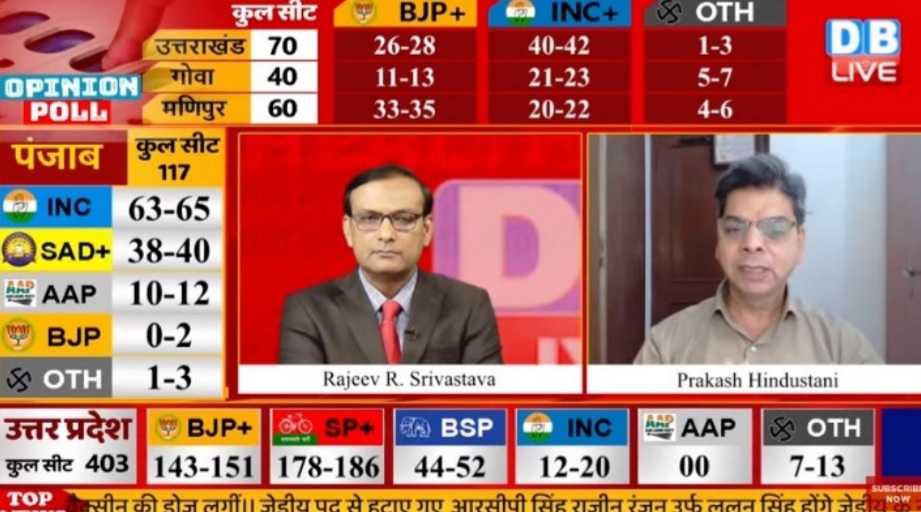 BJP is in turmoil; its four-CMs have resigned from office in recent months. Gujarat, the prime-most BJP ruled state CM Vijay Rupani has just resigned. BJP had to bite dust in West Bengal where it had put its utmost money-and-muscle-machinery but could not stop Mamta Banerjee from assuming to office, in may last, for the third time in row. It could nudge with a wafer-thin margin in the Bihar polls, in November 2020, where election-commission came to its rescue amid open allegations that the respective DMs did not give winning certificates to candidates from RJD and helped BJP alliance win the elections.

The rug from beneath the feet of BJP in UP is now for a slip as DB Opinion Poll, which is a very serious news outlet with no bards or vibes for TRP, has disclosed that in the next five months, where elections are due i.e. Uttar Pradesh, Goa, Mizoram, Uttarakhand and Punjab, BJP is slated to be wiped-off! Four out of these five-states have BJP in power. The poll is very clear that BJP stands to be drubbed as ‘things have well got out of hand’ as BJP is to face a great anti-incumbent wave and is to be answerable for the rule of its last five-years.

The first to be discussed is Uttarakhand where there are 70 seats where there has been three CMs from BJP already changed and perhaps a musical-chair game for CM chair is what has been on the display. The seats towards BJP, in the DB Opinion poll shows to be 26-28, whereas the incumbent party, which is Congress is shown to be getting 39-41 seats. This is a very clear edge and majority for the next government to change in UT. Aam Aadmi Party may also cut into BJP stranglehold. DB Opinion polls in its last two segments had also found that BJP is slated to bow-down from UT. BJP in 2017 had 57 seats in its tally. UT it may be known had been the worst hit by COVID-19 handling of BJP, particularly, due to the inept mismanagement of Kumbh Mela.

The political dynamics inside Goa were well against BJP, as all BJP could win were 13 seats our of 40 in 2017 and Congress had won 17, but owing to BJP at Center, since 2014, there was rampant horse-trading which saw BJP sail through. But, this time, as per the DB Opinion Poll, the mandate is clearly to be in favour of Congress which is shown to notch-up 22-24 seats while BJP at the most is not to cross the tally of 13, which ironically, was the same figure which BJP had found in 2017. Here it may be put clear that DB Live, which was aired on Youtube on July 31, is just showing the public sentiment and is far away from any of the rhetoric which is otherwise available on so-called-mainstream news channels. Unlike, what kind of BJP sponsored opinion polls (sic) had been on the channels, which had been put into use to promulgate the BJP’s lead in the coming elections.

The Manipur situation is poised on an equal footing. BJP had won 21 seats out of 60 in 2017, yet it formed the government owing to robust help from BJP led Central government. Congress despite with 27 MLAs had to sit in opposition, but according to DB polls this time, both BJP and Congress are at par with each other as both the parties are almost in a tie, with BJP (28-30) and Congress (26-28) showing the incumbent numbers. There is likely to be a hung-assembly in Manipur, but Manipur has a tradition of voting for the party at the Center, which is therefore to be a fillip to BJP as the next general elections are in 2014, yet Congress is what may give BJP a heavy-chase, solely for the anti-incumbency wave.

Punjab is where is the epicenter of farmers movement and the popularity of BJP in Punjab is at its nadir. The BJP tally is supposedly on to its lowest ebb, as DB Opinion Poll, shows BJP finishing with around 2-4 seats in the overall 117 seats in Punjab assembly. Congress, despite the unhappy moments between CM Amrinder Singh and Navjot Singh Siddhu is due to get 57-59 seats which will make it form the government on its own, while Srimoni Akali Dal seem to be en-cashing on the anti-incumbency wave against Congress with (42-44) seats and AAP with (10-12) seats. Here AAP is also set to be on decline as it had won 20 seats in 2017 while Congress had then won 77.

UP, where the crux of the entire political scenario lies, is also to find BJP making an exit. It had won 312/403 seats in 2017, and this time, on the findings of DB Live, it shows BJP and allies with (143-151) and the largest party as SP with a (178-186) seat projection. It is clear that SP is quite ahead in lead as it is the most incumbent party. BSP is to finish with (44-52) seats and Congress to become almost insignificant with (12-20) seats. But, nothing can be that certain as BSP might as a post-poll partner, as has happened for thrice in the past, may make a BJP-BSP government, but people in UP, who have borne the worst brunt in UP, might be going for a clear majority for SP, as coalition governments, as far as past experience goes, often have ended in more tardiness.

No doubt, this DB Live show has put up a figure which is bereft of any political rendezvous to set-up for conduciveness for BJP which is what all news channels are vying for. But, political gamesmanship from BJP, which has virtually, all the resources under the sun, is now to be on its hardest test, as the results of the elections in these five states will have a resonance in 2024. It is for Akhilesh Yadav, to pull up the socks for the final battle, as UP, is what would decide the fate for India.

The next six-months are extremely crucial.

**
The writer is a former UP State Information Commissioner, a lawyer and a political analyst.