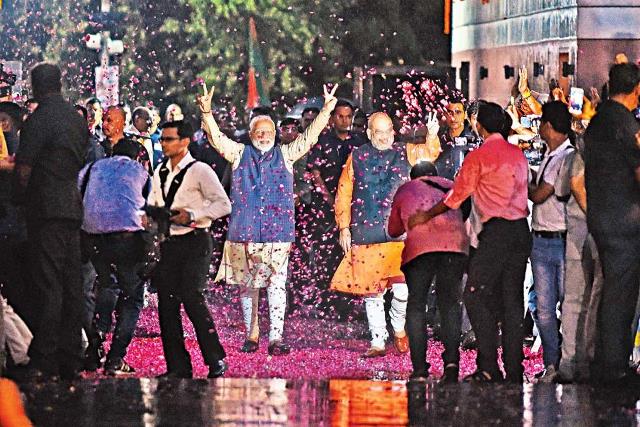 The Bharatiya Janata party has won a landslide victory, Modi becoming the only prime minister after Nehru and Indira to retain power with full majority.

Their victory didn’t come overnight nor is it the result of a sudden wave. Recognition is due to Narendra Modi’s dramatic orating skills, brilliant election campaign, playing the unfailing religion card, confirming it with the perfect dash of nationalism- the opiate of the masses, sprawling advertisement presence and an unending screen space. Also thanks to the introduction of electoral bonds which made much of it possible omitting unimportant questions like which were the organisations funding the BJP generously and their agenda behind it.

What were the developments which saw Modi, the Gujarat riots accused of 2002, pull off a historic mandate so powerful that the country chanted his name despite his failure to deliver any of his promises from the previous tenure? During the 2014 elections, there were other issues which covered up for Hindutva agenda mainly corruption upon which the BJP rode to victory. But in the 2019 elections, having failed miserably on the economic front, employment front, GDP and inflation front, to name a few, all the cover-ups of Hindutva agenda blew away as well. This time it boldly betted on the communist agenda alone and came out with a thumping victory. It must be understood that the shift has been gradual.

In 2005, our Prime Minister, Narendra Modi was denied the US visa for his failure to stop Hindu riots in 2002 which killed about 1000 Muslims and destroyed homes and livelihood in Gujarat. In 2012, a supreme court appointed SIT cleared him of all charges citing inadequate evidence and it was not until September 2014 that he was issued a US visa. It should be noted that the trial court gave him clean chit despite many evidences obtained through various sting operations conducted by journalists like Rana Ayyub and Ashish Khetan. The clean chit was more of a legal clearance for the nomination as the Prime Ministerial candidate. Just as clean chits were issued to LK Advani and Vajpayee.

BJP President and Modi’s right hand, Amit Shah too had murder and fake encounter cases against him. The first judge who was to oversee the case was transferred, the second judge was found dead under mysterious circumstances thereafter which Amit Shah was discharged.

In January 2018, four Supreme Court Judges held a Press Conference to give their statements to the public of India that the democracy of the country was at stake. They stated that the way things were being done at one of the highest Institutions of democracy were threatening its integrity. Cases were being assigned by the Chief justices of the court selectively to the benches of their preference. This was an extraordinary event to have happened in the history of any democracy. It was the clearest acknowledgement of the interference of the government in the judicial proceedings.

The state of democracy has ever since fallen miserably. Besides incidences of lynchings and mob violence encouraged by Modi’s silence, rape incidents have seen an increase and women empowerment has taken a backseat. The country has witnessed the bar association of Kathua, Jammu protest FOR the rapist, blocking the crime branch from filing chargesheet into the rape and murder of an 8 year old girl.

The government signed a deal to purchase 36 French Rafale jets for RS 59000 crore with Anil Ambani as the contractor. Soon after, it came to light that the French government waived Anil Ambani’s taxes worth €1437 million. The government clearly worked in the interest of the business tycoon rather than the countries.

The result of this election, whether it is the public mandate or a rigged result (Are the numbers even real?) is the failure of democracy. In the world’s largest democracy, this election has proven the inefficiency of the democratic way of governance. It has proven that even if the mandate is by the people, it won’t be always for the people. This election was the clearest display of a time when majority is not about morality. This mandate has only exposed the fallacy of democracy. Here has come a time when the mandate of people does not stand for the pillars on which democracy stands namely independent Judiciary, equality, transparency, inclusiveness, Liberty, freedom of speech, freedom of press, freedom of religion, the list goes on. So now on which side would democracy stand, on the side of majority or the side of morality?