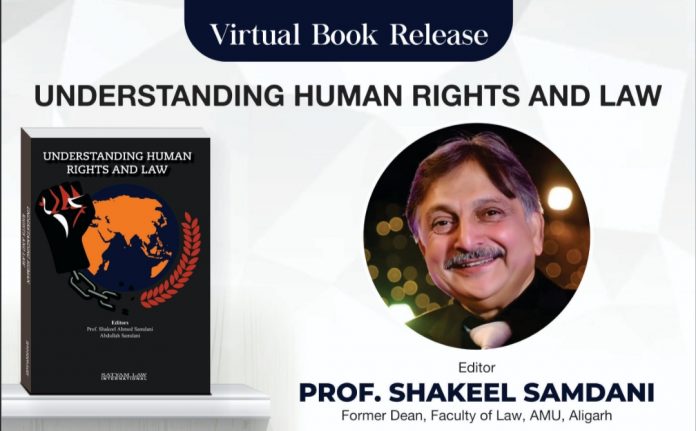 Presiding over this event, Prof. Tariq Mansoor, Vice Chancellor, AMU, Aligarh said that, Prof. Samdani was a good teacher, researcher and above all, a versatile and a very talented public speaker. He remembered his speech when he represented the AMU teachers at Sir Syed Day 2020 and said that he was the only person who gave an extempore speech. He further said that he was surprised to see Prof. Samdani’s popularity after he received so many tributes from people outside Aligarh.

Discussing about the human rights book, Prof. Mansoor said that he has written forward for this book along with Justice K G Balakrishnan, Former Chief Justice of India. He said that we cannot have a civilized society without an educational system and a sound legal system. He said that this book contains 20 well researched articles from academicians, judges, lawyers, researchers and students. He congratulated Late Prof. Samdani and Abdullah Samdani for bringing an edited book on a very important topic.

While delivering his key note speech, Prof. Faizan Mustafa, Vice Chancellor, NALSAR University of Law, Hyderabad, said that my relationship with Prof. Samdani very close. He shared many old incidents from Prof. Samdani’s life, including his popularity with the students of Aligarh Muslim University. He said that Prof. Samdani was very keen for human rights.

Prof. Mustafa explained in detail about his perception of human rights which has been influenced by the Western perspective. He also discussed in detail about the article on Marxism theory which has been written by Prof. Mohibul Haque in this book. He further stated that, this book can be very useful if we have our commitment towards human rights. At last, he said that he sees a young, talented scholar in Abdullah Samdani who can carry forward the legacy of his father, Prof. Shakeel Samdani.

Speaking in this event, Prof. Md. Zafar Mahfooz Nomani, Dept. of Law, AMU congratulated the family members of Prof. Shakeel Samdani for organizing this event. He said Law Faculty, AMU has lost a gem in the face of Prof. Samdani.

Speaking in this event, Dr. Dilshad Ahmad, President of Indian Forum for Education, Riyadh, Saudi Arabia said that Prof. Samdani was a very dynamic person. He always wanted the upliftment of Muslim community. He discussed in detail about how Prof. Samdani motivated the NRI students of Saudi Arabia to pursue legal field as their career in a webinar organized by his forum. He said that whatever Prof. Samdani advised he used to give examples from Quran and Sunnah to support it. Dr. Dilshad also discussed in detail about the important topics which the book Understanding Human Rights and Law have discussed.

Speaking in this event, Adv. Shariq Abbasi, Supreme Court of India, New Delhi said that Prof. Samdani was bestowed with the capacity to do big things in a short span of time. He gave the example of an event in which Former Chief Justice of India addressed the students of AMU, that Prof. Samdani successfully organized this event in a short period of only 12 hours. He said Prof. Samdani had deep and great concern about the human rights throughout the world and this book has reflected his concern. He said that seven important aspects of human rights have been wonderfully covered in this book.

Last speaker, Dr. Shad Ahmad Khan, University of Buraimi, Oman said that he is having very mixed feeling of joy and sadness whenever he looks at this book. He said that he had shared a very special bond with Prof. Samdani from his student life. He said that today’s event is more than a book release ceremony and we can celebrate it as a tribute to Prof. Samdani for his contributions throughout his life.