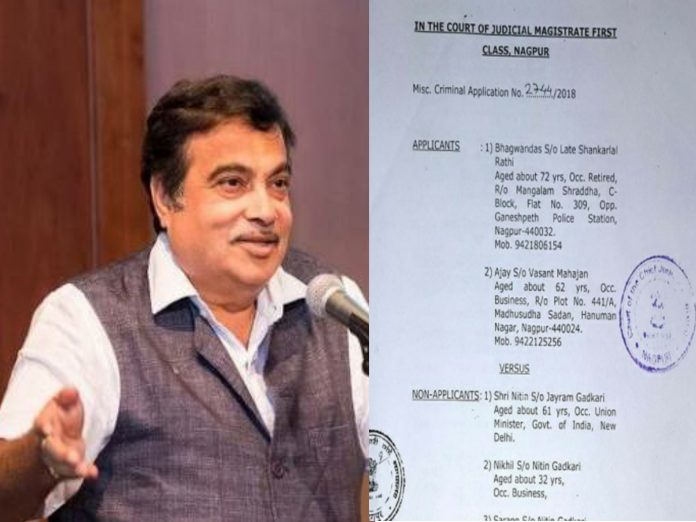 New Delhi: In a shocking development that could trigger a huge setback for ruling Bharatiya Janta Party before 2019 elections, Union Minister for Minister for Road Transport & Highways, Shipping and Water Resources, Nitin Gadkari and his sons have been accused of fraud and deceit in a land scam. The allegations are filed by Bhagwandas Rathi (72), Ava Ajay (62), in the court of Chief Judicial Magistrate of Nagpur.

The petitioners have  demanded strict action against Nitin Gadkari and several others in the court on August 7 as well asked to register an FIR against the enrolled.

The issue is  related to a land grab for an Industrial  Cooperative society. The society was formed in the year 1988 in the name of poly sack Industrial Cooperative Society Limited. Then, in the promoter ship of Nitin Gadkari, there were around 1320 shareholders including the petitioner Bhagwandas.

Meanwhile, the Maharashtra government had allocated a sum of Rs 24.77 lacs, and along with it had  also became a shareholder in this particular property.

After this, the society was allotted 4950 sqm plot at 20 rupees per square meter by the Maharashtra Industrial Development Cooperation. The rent of the land allotted was accordingly  kept at one rupee per square meter.

The petitioner Bhagwan Das mentioned in the petition that after the year 2003, the society had stopped working .In response, on 23 September 2016, he filed an RTI and sought information from the Maharashtra Industrial Development Cooperation regarding  the status of the society. In reply,  MIDC revealed that in 2012, the plot of the Society has been transferred to Solar Power System Private Limited, which is a private company of Nitin Gadkari.

In this order, a loan of Rs 42.83 crore was also taken from Saraswat Bank by mortgaging the plot of the society. This loan was taken on the name of M/s GMT Mining and Private Limited Company owned by Nitin Gadkari’s son Nikhil Gadkari and Sarang Gadkari.

To get a more satisfactory information, Bhagwan Das again filed an RTI to the registrar cooperative society and asked for further  information. While on 8 March 2017 he was informed that “Plot No. J-17, MIDC, Hingna Nagpur Transfer or its Saraswat Cooperative Bank, Nagpur should be pledged. No information is available. ”

In reply to the RTI, it was mentioned that there is no information to deposit the cost of the plot near the society or any kind of permission has not been obtained from the cooperative society.

In the petition, Das claimed that the District Deputy Registrar had told him on 19.10.2016 that the factory attached to the Cooperative Society was closed in March 2003;, no annual report of the Society is available after 31.03.2003, as well there is no information of Rs 24.77 lakh collected by the society.

Bhagwan Das says that the loan of Rs 43 crores by Saraswat Bank to the GMT Mining and Power Private Limited is totally fraudulent and clearly indicates role of Nitin Gadkari.

It has been stated in the petition that neither the other shareholders were informed in this context nor any General Body meeting was organized.

It is noteworthy that no permission was taken from the deputy registrar of the cooperative society while transferring the land of 4950 square meters illegally to the solar system as well from as well full amount of the loan has been also taken in the name of the second company.

Bhagwan Das allegedly claimed that the entire transaction has been done in the care and control of Nitin Gadkari.

The most interesting thing about the whole matter is that the RSS chief Mohan Bhagwat and Chief Minister Devendra Fadnavis & his brother are also the shareholders.