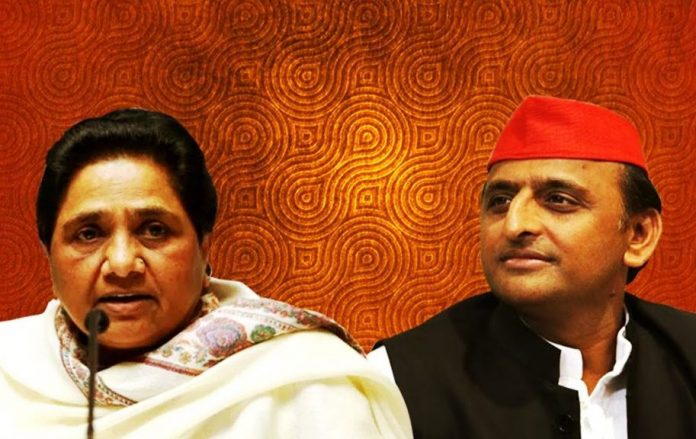 The political calculus has again started its reckoning as Azamgarh and Rampur-two most prestigious parliamentary seats of Samajwadi Party are slated to go for polls on June 23. Azamgarh was represented by SP Chief Akhilesh Yadav and Rampur by Muhammed Azam Khan, both resigned from their seats to put their representation in UP Assembly.  No party has announced its candidates as yet, but Bahujan Samaj Party Supremo Mayawati has announced Shah Alam alias Guddu Jamali, to be its candidate from Azamgah, where SP had won all the ten seats in March UP Assembly elections. BSP will not contest elections from Rampur.

The BSP, as can now be very easily deciphered, will stick to its old game plan, it will see that BJP cruises to victory! As it has done on multiple times before, apart from having formed government for thrice with BJP support. BSP’s past record forced Muslims to abandon it, and the same was also acknowledged by Mayawati, in post-2022 polls, that since Muslims went for SP, therefore, its main poll base-the Jatavs, also shifted to BJP. Here also she blamed Muslims! It is estimated that around 90% of Muslim’s vote went towards SP. In UP, Muslims make for around 20% of the whole populace.

Will it be feasible to recollect that UP CM Mayawati had not filed a fresh notification against Babri Masjid demolition main accused LK Advani, when he was exonerated of the charge in 2003, and if today LK Adavni is free, it is totally out of the courtesies of Mayawati. Mayawati opposed the no-confidence motion against BJP government led by AB Vajpayee at the Center in 2003 and made its 14 parliamentarians to vote in favour of BJP. If today BJP led NDA is at the helm, is this powerful stage, a lot of its credit goes to BSP. Mayawati had openly boasted to have shifted its core-vote in favour of BJP in 2006 Mayor elections in Meerut ( UP)-something which was stunning then, but now has become a norm.  The pictures of Mayawati on the election campaign of the then Gujarat CM Narendra Modi (2002) are still fresh in people’s memory.

Mayawati, as can be easily understood, is on her time-tested policy again, and has fielded Guddu Jamali, who has been charge-sheeted by police in a molestation case in 2021, with the sole agenda to cut into Muslim votes of SP, and also that BSP will shift its Jatav votes towards BJP. To mark for BJP victory. While also there would be also multiple proxy candidates, in the name of All India Muslim Ittehadul Muslimeen (AIMIM) etc., many dummy candidates with a Yadav denomination due to the blessings of SP turncoats. But, every such effort will meet a very tough competition as Azamgarh is where the stamp of Mulayam Singh Yadav reigns as this is SP stronghold. BJP, with its extreme muscle, media  and money power will try every but to disturb the SP fortunes. Ironically, Jamali contested on AIMIM ticket in the just concluded elections. Why would the ‘high-end’ Asad-ud-Din Owaisi give ticket to such a candidate is also what needs an answer. Jamali’s matter is in the court.

It is now a known fact that BSP fielded 86 /403 Muslims whose job was only to eat into the Muslim vote share of SP (and allies) which finished with 34 as winners which included 32 from SP while 31 SP Muslims finished second. These Muslim candidates lost by a very wafer thin margin, and it proves that SP had fielded its candidates on their win-ability, and BSP & AIMIM made SP Muslims lose many seats i.e. by a margin of 217-1700 votes. Apart from this, BSP fielded 122 candidates from the same caste denomination of SP candidate and BJP won 68 out of them. BSP only worked to see BJP win. This is what the people from both Azamgarh and Rampur are to answer back. BSP finished with one seat and AIMIM with none. SP had fielded 64 Muslim candidates.

Rampur is the seat where politics revolve Muhammed Azam Khan, as he has been a 10 times MLA from the same, apart from winning once the parliament seat (2019) and is right now under medical supervision at a Sir Ganga Ram Hospital in New Delhi.  He has recently been out on bail, after an imprisonment of 27 months where his son and his wife were his inmates. All the three are now on bail. His son is a two-time MLA, his wife an Ex. MLA and an Ex. Member of Rajya Sabha. He too has been once a RS member.

In 2019 SP and BSP were coalition partners and MA Khan in his speech had said that he would get the District Magistrate of Rampur ‘polish the shoes’ of Behenji, an acronym of Mayawati, which is said to have invited a personal ire of DM and MA Khan landed-up with more than 100 cases slapped on him.  It may also be reiterated that it was the same CM Mayawati (2007-12) who had bulldozed the wall of Jauhar University, the dream project of MA Khan. BSP does not have any vote-base in Rampur, therefore, by not fielding its candidate BSP has offered a cake-walk to BJP.

But, the political windscreen, from the past since March, has found a sustained campaign through media, that everything is not fine inside SP under Akhilesh Yadav, towards which his uncle Shivpal Yadav, who has enjoyed full-hospitality of Union Home Minister Amit Shah for all the last five-years, has opened a front, amid the rumors that he would soon join BJP.  But, inside which he also wants to engulf MA Khan too!  MA Khan, however, has till date maintained that he is not slated to abandon SP.

It may also be pertinent to recall here that in 2009 general elections, when MA Khan had been expelled from SP, a slogan had then reverberated the environs of Rampur, ‘Azam Khan ki baat par/Muhar lagegi haath par’( On the credibility of Azam Khan/ Vote would go Congress).  MA Khan was not to support SP candidate Jaya Prada, and Rampur votes had gone to Congress candidate Noor Bano (Congress) who had lost by a very thin margin to Jaya Prada as BJP had shifted-its vote towards SP. MA Khan was later inducted into SP in 2011.

What is the game plan to be unveiled in Rampur is yet to be seen. How will MA Khan open-up to his cards, particularly when adjacent Sambhal and Muradabad parliament seats are also of SP, is all yet to come.  Will MA Khan remain subdued, as the way he seems to be right now, is all to unfold. However, if Rampur slips to BJP, it would be a personal defeat of MA Khan and Shivpal Yadav will then be able to get the real accolades from BJP. How the drama is to unfurl in both Azamgarh and Rampur is all what would come out on June 26, when the results would be announced. SP and BJP are yet to declare their candidates.  Will BSP succeed to see BJP victory? Let’s see.