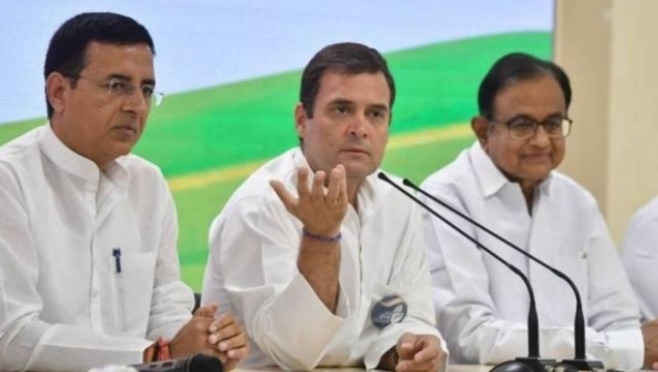 New Delhi: The major opposition parties Monday termed the Union Budget for 2021-22 presented by Finance Minister Nirmala Sitharaman today as “a colossal betrayal of the people and a letdown like never before” which is a classic illustration of the Modi Government’s unshakeable commitment to promoting the interests of crony capitalists. Raising serious concerns over the wholesale privatisation of public sector banks, they also tore upon “unprecedented” hike in health allocation as the FM claimed in her budget speech.

Sitharaman presented the budget for 2021-22 in the Lok Sabha from a tablet, instead of a conventional paper document, the first paperless budget since Independence.

Addressing a press conference at the party headquarters here after the budget presentation, former finance minister and senior Congress leader P. Chidambaram described the budget as one that has deceived people of India, especially the poor, the working class, migrants and farmers and it will unravel soon.

Chidambaram said the FM “deceived” those who were listening to her speech, especially the MPs, had no clue that she imposed cesses on a large number of products including petrol and diesel — Rs 2.50 on petrol per litre and Rs 4 on diesel per litre.

He further said “It was a vengeful act against the thousands of farmers who took out the longest tractor rally in history. It was also a cruel blow to federalism because the states do not get a share of the revenue from cesses”.

Calling the cesses   a “cruel blow” to the average citizen, including farmers, the former finance minister alleged that “She flattered only to deceive. She deceived the people of India, especially the poor, the working class, the migrants, the farmers, the industrial units that had been closed down permanently, and those who had lost their jobs, both regular and informal, and are still looking for jobs”.

In her speech, the FM made a reference to the Prime Minister 14 times and to the farmers 11 times but did not mention Defence at all, as if the Chinese had vacated occupied Indian Territory, he pointed out.

She did not mention that the defence expenditure in 2021-22 will not see any significant rise, he added.

In his tweet, former Congress president Rahul Gandhi also said “China occupied our territory & killed our soldiers. PM spends Diwali with them for PR photo-ops. Why hasn’t he increased the Defence Budget for them”? Gandhi also alleged that the Modi government plans to hand over India’s assets to crony capitalists.

While continuing his dissection of the budget, Chidambaram recalled that “The FM had promised a Budget “like never before”. What she did, however, was to estimate expenditure over 2 years or 3 years or 4 years or, in one case, over 5 years”.

Tearing upon the mind boggling figure of Rs 223,846 crore for Heath, Chidambaram said it was a ‘conjurer’s’ trick and claimed that given inflation, the increase is practically nil .

It is a breathtaking “rise” from the Budget Estimate of the current year of Rs 94,452 crore but it is  a conjurer’s trick as she added the one-time cost of vaccination ((Rs 35,000 crore) and the Finance Commission grants amounting to Rs 49,214 crore, he said.

On the fiscal situation, he said it is in a mess as the Revenue Deficit(RD) (7.5%) and the Fiscal Deficit (FD) (9.5%) in the current year have exceeded every prediction.,

The RD (5.1%) and FD (6.8%) numbers for 2021-22 will send alarm signals to the rest of the world, especially the investors and international lenders, he warned.

On being asked  that a good 40 minutes before the FM  read para 141 of her speech, Bloomberg put out the Fiscal Deficit and RD numbers for 2020-2,  Chidambaram quipped ‘since the CBI and Enforcement Directorate are under work, maybe this matter should be referred to them.

In response to another question about the FM announcing various schemes for the election going states like Assam, West Bengal, he said the voters are not fools and they know that these are outlays and these outlays will not be backed by any money in this budget.

“I challenge the Government to show me one line entry in the expenditure budget providing one rupee for these programmes”, Chidambaram said.

The Communist Party of India (Marxist) also described the budget as a colossal betrayal of the people caught in the double crisis of pandemic and recession.

The Polit Bureau of CPI (M) said it is a classic illustration of the Modi Government’s unshakeable commitment to promoting the interests of a handful of big business houses at the expense of increasing distress and misery for the working people.

“This is reflected in the refusal of the Government to increase public expenditure notwithstanding its bombastic claims. The budgeted Central Government’s total expenditure of 34.8 lakh crores in 2021-22 is identical in nominal terms to that in 2020-21 – which amounts to slashing expenditure in real terms. This represents the complete abrogation by the Government of its responsibility towards the people but shoring up the fortunes of a privileged few including through their greater control over the nation’s productive assets”.

It pointed out that   under several heads; expenditure in 2020-21 was actually lower than budgeted. These include Agriculture, Education, Social Welfare, Women and Child Development, Scientific Departments, Urban Development, Pensions and Disability Affairs etc.

Not only are these cuts being carried forward into the next year too, even in the few heads of increased expenditure in 2020-21, like Health and Rural Development, the Budget proposes to cut down expenditures, it further said.

The CPI (M) also raised concerns over the sell off of India’s national assets and privatization  even profit making public sector companies.

Taking a dig at the slogan of atma nirbharta, the party said the monetisation project announced in the budget included sale of valuable land held at present by public sector companies and the target is to mobilise 1.75 lakh crores through disinvestment.

“The increase in FDI in insurance to 74 per cent is highly objectionable. This drive for privatisation is a subversion of the national interests and a mockery of the slogan of ‘atma nirbharta’.

In its reaction, the Welfare Party of India described the budget as anti-poor and pro-rich. Party President Dr S Q R Ilyas said the budget will serve only the interest of big corporate houses while it does not provide any relief to the masses who have been reeling under the twin miseries of pandemic. He also severely criticised budgetary proposals to sell off public sector units.

Prove order given to HAL or resign, Rahul tells Sitharaman