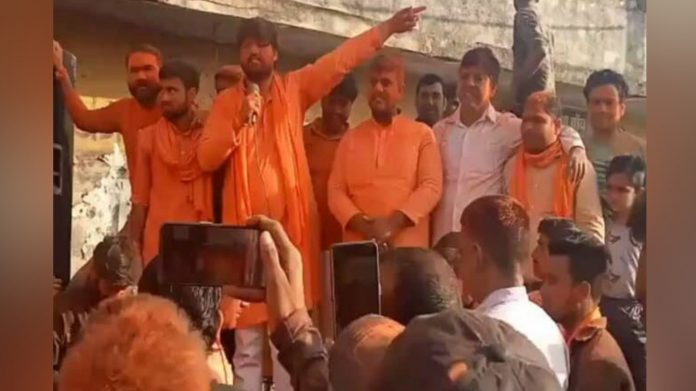 A police official told IANS that a case has been registered against the accused under sections 153A (promoting enmity between different groups on grounds of religion, race) and 505 (2) (public mischief) of the Indian Penal Code at Muradnagar police station.

The incident was reported the same day when the BJP returned to power in the Uttar Pradesh.

In a 59-second video, accessed by IANS, Tyagi, while addressing a gathering from a podium, could be heard asking people to tell ‘them’ to remove loudspeakers from the mosques otherwise Hindu Yuva Vahini will themselves remove it. He also called Muslims “Pigs” and “Jehadist”.

The police official said they themselves took cognizance of the video after it went viral on social media and other platforms. The official confirmed that so far no arrests have been made in the case. Meanwhile, a complaint was also lodged at the Shaheen Bagh police station regarding the same hate speech.

Complainant Aarfa Khanam, in her complaint, said that the remarks made by Tyagi have hurt the sentiments of the minority community.

“I request the police department to take punitive action against the man who made such an inflammatory speech,” she added.

A Delhi Police official said that, so far, no FIR has been registered as the ‘hate speech’ was made in Ghaziabad.

“We are analysing the complaint and will take a decision after consulting the prosecution branch,” the official said. -IANS