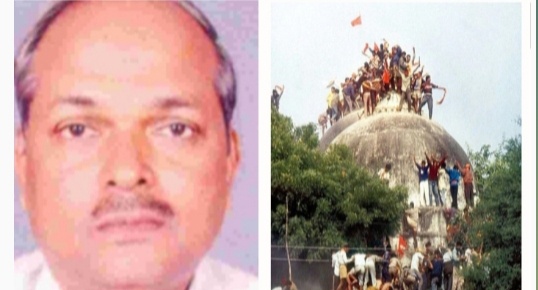 Lucknow: Now the cat is out of the bag.  Surendra Kumar Yadav, the special CBI judge who acquitted all the 32 accused in the  Babri Masjid demolition and conspiracy  case,  was made ”up-Lokayukta” (Deputy-Lokayukta) in Uttar Pradesh on Monday.

As Special judge of CBI Lucknow court, Yadav gave the verdict in Babri Masjid demolition case in September 2020 acquitting all the accused including BJP former president and former deputy Prime Minister LK Advani, former union ministers M M Joshi, and Uma Bharti, and former Uttar Pradesh chief minister Kalyan Singh.  While acquitting all of them honourably, the judge even went up saying that all the leaders were pursuing “enraged Kar sevaks” no to demolish the historic mosque. Babri mosque in Ayodhya was pulled down on December 6, 1992 in the presence of heavy military and para military forces and while Advani, Joshi, Bharati and other BJP and RSS leaders were seen inciting people to raze the mosque.

According to a Governor House communiqué,   “Yadav was appointed ‘UP-Lokayukta” (III) by Governor of Uttar Pradesh Anandiben Patel on April 6. On April 12 Yadav took oath in the presence of UP Lokayukta Justice Sanjay Mishra, the government said. The anti-corruption watchdog comprises the Lokayukta and three”up-Lokayukta”. The tenure of an”up-Lokayukta” is eight years.

Yadav, a native of eastern UP district Jaunpur, retired as a district judge of Lucknow on September 30, 2019, but continued on extension, to hear 28- years-old Babri Masjid demolition case, as the judge of the special CBI court till his retirement the following year. He completed his higher studies in the neighboring city of Varanasi.  On Yadav’s appointment, a political commentator said it is not surprising the way the present regime is awarding those who toe their line. However, he cautioned that it will have serious repercussion on integrity of those people who are supposed to deliver justice.