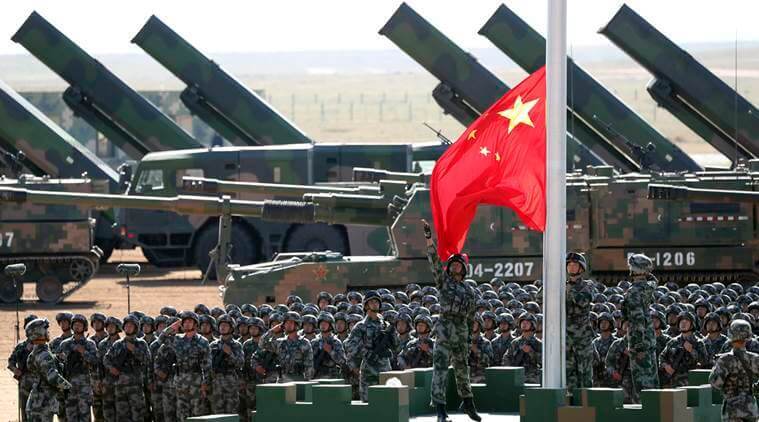 US is ‘pushing-off’ from Afghanistan and China is ‘pushing-in’ into Afghanistan is how the next years of Afghanistan coming to be, and with it, it has hit the US that its worst bête noirs i.e. Afghanistan and Iran are to have now Chinese military bases. When US and Afghan-Taliban entered into a peace deal on February 29, 2020 it was decided that US would leave Afghanistan in the next 14 months and in my piece Afghanistan is on a Very Sticky Wicket published in Counter Currents on September 18, 2020 . I tried to put into order the scenario likely to be built after US would leave.  It may be recounted here that after 19 years of war in Afghanistan, US lost more than 3000 of its soldiers, wounded 20,660  and incurred 975 billion USD  .

US the sole superpower of the world particularly after the Soviet Union had got broken,  however, now is getting a challenge from an emerging new super-power that is China and no wonder both the countries are in fierce conflict, in many parts of the world, i.e. South China Sea, over the spread  of COVID-19  virus, military advancements, over Palestine where China supports it and US supports Israel and close together in India where China and India are embittered over border disputes with US on the side of India. US now is in support of India over Pakistan which stands with China. Hence, the vacuum to be left by US in Afghanistan is now likely to be filled by China and also by the erstwhile rival of US i.e. Russia. India is now outside the Russian shadow and Pakistan seem closer to it. India Iran civilisational ties have been shown the backdoor as Iran is now with China and India has been given a silent exit.

China is therefore throwing itself into the cauldron, in competitiveness/conflict with US in Middle-East, in Indo-Pacific, Afghanistan etc and what is supposedly important and undeniable is the role of Pakistan which played a pivotal character into Afghanistan-China friendship , and if political developments are juxtaposed, then it would be Afghanistan-China deal and Arabs-Israel deal, happening almost side by side. China has entered into a deal with Afghan-Taliban that it would invest in education, infrastructure, technology etc in exchange for an insurance of ‘peace’ in Afghanistan. One important report which brought this offer to light has been published in The Financial Times on September 8, 2020  , which says ‘Beijing hopes infrastructure investment can prevent instability in Afghanistan after US troop withdrawal.  It has been leant through the report that China has offered to build a road network for the Taliban if they can ensure peace in Afghanistan after the US military withdrawal, according to two senior tribal leaders in Pakistan with close ties to the militants’.

The same report informs that ‘diplomats from Beijing offered “sizeable investments in energy and infrastructure projects” in the country during talks that have been taking place over the past three months in Beijing, the tribal leaders from Pakistan’s south-western Balochistan province have informed.  “Chinese officials have told the Taliban to bring peace [to Afghanistan] and China will invest in roads to begin with. ” said one leader.“In future, China also wants to look at energy projects like generating electricity and then transporting oil and gas from central Asia [through Afghanistan].” The Chinese are thinking ahead on Afghanistan and laying the ground for the future, said James Dorsey, security expert. A second tribal leader in Balochistan, who returned from Afghanistan in late August after spending a month there, said China had pledged to build motorways that would link Afghanistan’s main cities’. “The Chinese promise is led by a road network across Afghanistan. Once such a network is built with six-lane highways, the Chinese have said local commerce and trade will flourish,” he said. China is most likely to connect Afghanistan with its flagship Belt and Road Initiative in the coming days.

What however cannot be discounted is that China is most likely to develope its military base in Afghanistan once the US finally leaves. This is certainly going to be as much an anathema to US as to India and as well as to Israel.  China’s intention to go ahead with its plan had been reported through a an article from a well known Indian defence analyst Col. Vinayak Bhat (Retd) in The Print on Feb 22, 2019  , the article, full of satellite imagery can put to rest all the speculations that China has gone well ahead into making a military base near key Afghan corridor, in the north of Pakistan Occupied Kashmir. ‘And now four days ago, (it has been ) reported that for at least the last three years, Chinese troops have been stationed in the Central Asian country of Tajikistan, a few miles away from its border with China and a proverbial stone’s throw from the strategic Wakhan Corridor in Afghanistan’. It may be here mentioned again that in the new circumstances China has been allayed with its fears, which were there once, that Islamic State militants fleeing Iraq and Syria would enter China, as now Pakistan, Turkey, Iran have started to have bonhomie with China despite the reports of China ‘strict-hand’ against Uighur Muslims in its Xinjiang province. If this project comes into existence then it would be the second Chinese military base overseas after it had opened up in Djibouti  (between Somalia and Ethiopia) in 2017.

India has had strenuous relations with Afghan-Taliban and has been supportive of non-Afghan-Taliban governments in Afghanistan in the last twenty years,  but with the rise of the new dispensation India shed its inhibitions and its external affairs minister Jaishankar addressed the inaugural session (virtually) of the ‘Qatar talks’ between Afghan-Taliban and Ashraf Ghani government on September 12, 2020   and had sought an assurance that Afghanistan soil would not be used against India. But, it also be important to add that both India’s defence minister Rajnath Singh and EAM Jaishankar has recently been give a ‘cold-shoulder’ by Iran and that ‘both of their visits’ hasn’t been ‘that positive’ from the Indian perspective, as Iran and China had finalised their ‘trade-and-military’ 400 billion USD deal on July 13, 2020  after India was ‘bid adieu’ and both the ministers visit ( in the first half of September) could not break ice in Tehran.

What is now to further add to the Indian headache, after the military base news in Afghanistan, is the prospect that China is now ahead to develope the same in Iran too and what may be  an ‘utter-surprise’ to many, the Iran-China idea to develope a military-base had taken much before the official deal was announced in July this year. A report published in American Enterprise Institute informs that ‘the rumors about the alleged lease (of Kish Island to China for 25 years) started airing in the conservative Iranian news agency Tasnim in February 2020’.  ‘China’s next military move: A base in the Persian Gulf? The report reflected the idea that ‘China was now into throwing a challenge to US in practically every field. ‘For the past half-century, the United States has essentially dominated international waters in the Persian Gulf uncontested by any Great Power. As in the South China Sea and in the Bab el-Mandeb, however, Xi may have ambitions to challenge the United States and assert its military influence over yet another strategic chokepoint’.

The presence of China now firmly in-between Afghanistan and Pakistan and Iran and Pakistan is on the road to re-building a new future, which however, seem to be a bumpy ride for India as well as to US. The US would never like to make it happen and it is also abundantly clear the US establishment does not actually want US to leave Afghanistan. It had already slashed the 1 billion USD aid to Afghanistan , and US president Donald Trump spoke in no unambiguous terms that Pentagon wants to keep waging war to keep the war contractors ‘happy’. 12  Perhaps, Trump has been the only US president who had cared not to spare its Pentagon too, so when PM Modi expressed reservations on the supply of Hydrochloroquine to US, in the wake of COVID-19 breakout, Trump threatened ‘retaliation’   and did not care even for  his personal friendship with Modi.

The new building scenario is that China, Iran, Turkey, Afghanistan, Pakistan with Russian support have US as their ‘joint foe’ and India is with US, Israel, UAE, Japan and Kingdom of Saudi Arabia. China has already built-up its naval base in Gwadar , Balochistan, Pakistan, where its CPEC ends, and also one in Tajkistan  too.  Israel and US are to keep an eye at Gwadar port, from Socotra island , Yemen, given by UAE to Israel.

Hence, China is now spreading its wings on the lines of US. It is looking eyes-into-eyes with US and in this changing world scenario India is steadfast with US against China but what is to be seen after November 2020 US elections is whether Trump, after winning, will also remain the same insensitive to India, towards which he has euphemistically offered to ‘mediate’ if the situation escalates with China, whereas, the fact is that the two nuclear armed giants are locked up in a tussle which has the capacity for a spill-out that may have ramifications for the whole world. But, with China making military bases in what can be called as ‘vicinity to India’ will surely make the tide become increasingly difficult for India in the coming days.

The writer is a former UP State Information Commissioner. He writes on international politics.