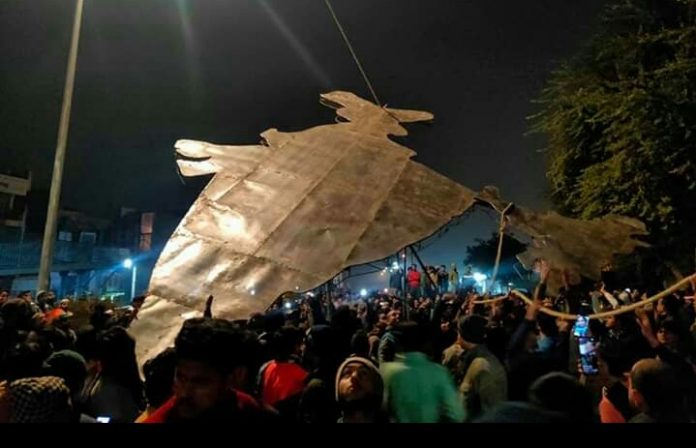 Vilification and denigration of Muslims is nothing new. We have seen concerted media campaign to almost make the word “terrorism” synonyms with Muslims in the post 9/11 world. So a similar murder of innocents on the streets will be described in a different phraseology if the perpetrators were white racists/ far-right or in India from Sangh affiliated organisations.

In India, similarly, first, a stereotype has been created & sustained in public memory that Muslims are violent, Jihadis planning terror attacks or anti-national anarchists if they are men. Muslim women, on the other hand, are described as brainless, faceless oppressed species who have no voice and need a Messiah from the Hindu community to champion their liberation from the hands of clergy & patriarchy.

While there is no denying that some Muslim men may be involved in criminal activity as is true with any community in India or some Muslim women having restricted freedom again not something much different from Indian society in general but the way these issues have been highlighted through print and electronic media smacks of a conspiracy and campaign of defamation.

Take, for example, the recent protests against CAA and NRC. Protests are massive and mostly peaceful. Despite that initial narrative dominating the media was that protesters were violent anarchist out to destroy public properties (उपद्रवी). Despite video footages available showing that in most instances it was the police that instigated the violence to find an excuse “to teach Muslim barbarians a lesson”. After all, more a leader spills Muslim blood on the streets, higher is his chances of ascent to the highest throne as experienced in the first two decades of this century.

The students of India’s premier universities who were exercising their democratic right of peaceful protest were mercilessly beaten and treated like criminals, and still, media continued to describe them responsible for their injuries or deaths of protesters in BJP ruled states. They didn’t question mass arrests, breaking in homes & School and terrorise those who were not even protesting. A leader from the ruling party of India boasted that “our (BJP) government (in UP, Delhi, Assam & Karnataka) shot protesters like dogs”. It is not just a coincidence that almost all 30 plus deaths in police firing came from these states.

The political observers & advisors of the ruling clan had calculated that with violent crackdown and disinformation through media they will be able to control the narrative and they almost did….till Shaheen Bagh happened.

Brave, educated and articulate women of Shaheen Bagh occupying an important street in Delhi as a means of peaceful protest changed the whole narrative & in the process demolished many stereotypes, myths and disinformation. Media couldn’t paint it violent and when the growing influence of this “Satyagraha” with nationalistic symbols like constitution and Tiranga surfaced it couldn’t be branded communal or Jihadist either.

Now in its desperation, BJP IT cell and its stooges in media are trying to portray this as managed by a political party and protesters who are braving the cold & hardship to reclaim their secular India from the fascist thugs as paid workers. Yes, you heard it right. Imagine the mind-set and the level media can go down to in portraying Muslims negatively. It should be ignored with the disdain it deserves.

And for the lowlifes of BJP IT cell & BJP supporters I can’t resist quoting Iqbal:

The author is a UK based Paediatrician currently working in Doha. He writes on contemporary issues. He can be contacted at nzjilani@gmail.com