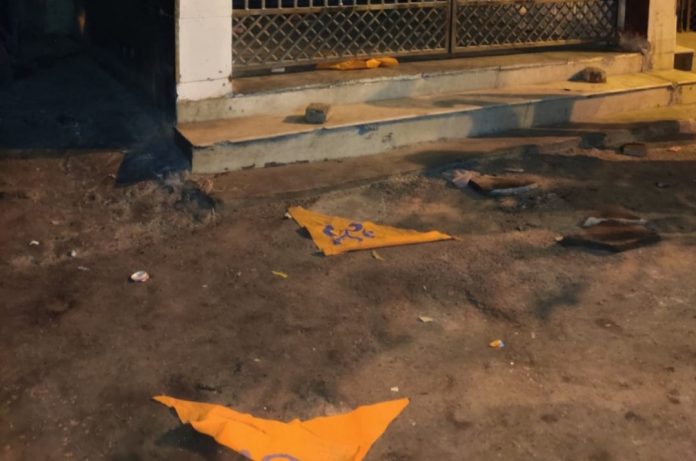 More than twenty people— mostly Muslims, including three minors — have been apprehended over the clashes in the National capital’s Jahangirpuri area that took place on Saturday during the Hanuman Jayanti processions.

Locals in Jahangirpuri especially Muslims feel unsafe and are living in fear as they feel that they are being targeted from both sides.

What actually happened that day (The eye witnesses account)

Locals in Jahangirpuri  said that during the procession at around 6 pm, members of Bajrang Dal stopped by the Mosque. Muslims, who had come to the Mosque to break their fast and offer Namaz.

In the daytime they had led many processions in the same area; they were advised by locals not to pass by the mosque since the Iftar time was approaching but they ignored the requests.

Each and everyone among the devotees was seen brandishing swords and other sharp weapons in their hands, none among them was seen without the weapons.

Locals said that while passing by with weapons in their hands, they tried to convey a clear message that we are superior to you and whatever we do, you have to tolerate.

As per the locals, the crowd chanted slogans like Mullu ko kaateinge (We will kill Mullahs) and ‘Jisko is desh mein rehna hoga, Jai Sri Ram kehna hoga’ (Whoever wants to live in this country, has to say Jai Sri Ram), while standing in front of the Mosque.

“Besides chanting slogans of Jai Shri Ram, the crowd hurled abuses at the Muslims,” said a resident of Jahangirpuri, who does not wish to be named.

Muslims of the area said that they did not react. But when a few of the devotees barged inside the mosque and tried to plant a saffron flag atop it, they tried to stop them.

“A few among the devotees entered the main gate of the mosque and tried to hoist the saffron flag in the Mosque and at the top of it. When we tried to stop them, the Bajrang Dal members retaliated by pelting stones and beating with lathis,” he said.

“They tried to use the weapons too but Alhamdullilah, no one was hurt,” he says.

“What is the purpose of hoisting a saffron flag atop a mosque, Isn’t it provocative?” he asked.

After that, the locals had tried to shoo them away but according to them they returned along with the police and pelted stones at them again.

“Hoisting the flag on Mosques is unacceptable and that’s why there was a backlash from people from inside the Mosque,” said Shabir.

“After that most of the people had gathered at one place and tried to keep the violent crowd away from the Mosque,” Shabir added.

Police tried to calm the situation after the clashes errupted.

After two to three hours of the incident police in large numbers were deployed in the area and the following day, police arrested 14 people from the area.

As per reports, police have arrested 23 people including three juveniles, 16 Muslims and seven Hindus so far.

As per eye witnesses, police were not so active and a few policemen who were present at the incident got hurt in the commotion.

If enough police would have been deployed in the area, especially near the mosque, this could have been prevented from happening, they say.

Locals have alleged the police of acting partially and arresting people from only one community without investigating the matter properly.

“If you see the list of those arrested, most of them are Muslims. It seems that the Police work with an agenda that they have to arrest only Muslims,” Shabir said.

“The crowd attacked with sharp weapons, we had to defend ourselves and save our lives, that is what we did,” he said .

He said that police should have provided them protection but they had to do it on their own.

They allege that it is quite evident that the other party has the support of administration and police.

“They enjoy full patronage from police and authorities, that’s why they openly roam around in crowds brandishing swords and guns, chanting slogans of killing Muslims, destroying their properties and threatening them, still they don’t get convicted,” said Ifham, another local resident.

“But we get arrested for saving our lives and  defending ourselves,” he said.

Locals and the families of the accused allege that they are being targeted and convicted for the crime which they haven’t done. Their only crime is being “Muslims”.

We have been living in Peace and Harmony

As per the Jahangirpuri Residents, they have always lived in peace and shared very good and healthy relations with each other.

They said that those were some miscreants from outside who came and tried to create communal violence and disturb the peace in the area.

“We have not seen such an incident before here in Jahangirpuri as Muslims and Hindus live here in peace and harmony. They love, respect and accept each other,” says, another local resident, wishing to be anonymous.

“We never went to any Mandir to chant slogans like this. If someone wants to come to the mosque and pray with us, he is welcome but not the violence. We want to send a message of harmony and love and that is what Islam teaches us,” says Maulana Mastan while talking to media persons in Jahangirpuri.

While expressing concern over the violence, many prominent people took to social media and also questioned the PM’s silence over it.

“The communal frenzy has now gripped the entire country. The same pattern, perpetrators giving hate speech, marching with swords, aided by the state, roaming free and the victims arrested, their houses demolished. NOT ONE WORD FROM NARENDRA MODI YET,” tweeted the prominent journalist Rana Ayyub.

Aam Aadmi Party leader Amanatullah Khan tweeted, “It is wrong to hold only one community responsible for the Jahangirpuri violence. Is it right to raise objectionable slogans outside the mosque, try to enter the mosque and try to put up the saffron flag?Action should be taken against whoever is at fault, but targeting only one community is wrong.”

While condemning the incident and making an appeal to people to maintain peace in the region, Delhi CM, Aarvind Kejriwal tweeted, “The incident of stone pelting in the procession in Jahangir Puri, Delhi is highly condemnable. Strict action should be taken against those who are guilty. Appeal to all people- Keep peace by holding each other’s hand.

Meanwhile Delhi Police has organised an Aman committee to work at local level and urge people to maintain peace in the region.

“DelhiPolice organised an Aman Committee meeting in North West Distt. All members were asked to appeal to their respective communities to maintain peace and harmony, fend off misinformation and report mischievous activities,” tweeted DCP Northwest Delhi.

(Names in the report have been changed to protect their identity)