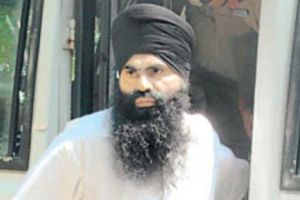 “Chief Minister Parkash Singh Badal and Akali Dal president Sukhbir Badal should clearly spell out their stand on the issue and also the contradictory approaches they have been adopting so far,” Congress leader Sukhpal Singh Khaira said.

“The demand for clemency to Bhullar by the Akali Dal is nothing but a farce, shedding crocodile tears and extreme double standards in politics,” Khaira said in a statement.

The core committee of Akali Dal had Saturday described as “deeply painful, unfortunate and worrying” the rejection by the Supreme Court of Bhullar’s petition for commuting his death sentence to life imprisonment.

An Akali Dal spokesperson had said the chief minister and the party chief would meet the president, the prime minister and union home minister to urge them “to operationalise the post-judicial mechanism of statesmanship in order to avoid even at this stage any steps that may pose a threat to peace and communal harmony in the country in general and Punjab in particular.”

Khaira, however, claimed that while defending Director General of Police (DGP) Sumedh Singh Saini in a case in the Supreme Court in 2009, the Badal government had submitted an affidavit: “Such hardcore and experienced criminals (Bhullar), who have a well-organised international support base…is a matter of concern.”

The case pertained to the disappearance of Bhullar’s father, uncle and another youth in 1991 following an attack on Saini with a car bomb in Chandigarh.

Khaira said the Badal government had hand-picked Saini as Punjab DGP last year, superseding five senior IPS officers. He added the government had been defending Saini in various cases despite his controversial past record in the elimination of youth in Punjab.

Khaira also questioned the Shiromani Gurdwara Parbandhak Committee (SGPC) president Avtar Singh Makkar for not confronting the government on the affidavit filed against Bhullar in the apex court.

“I am amused and surprised how the pleas of Akali Dal, SGPC and others will have any impact when the Badal government has taken such a stand against Bhullar in the Supreme Court,” Khaira pointed out.—IANS.