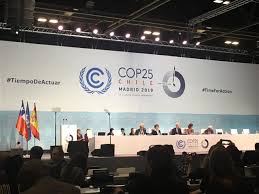 Madrid: The COP25 climate summit, slated to begin here on Monday, was expected to lay the groundwork for a new phase of environmental action.

The event was now taking place in the Spanish capital after the Chilean government said it could not host it owing to political unrest in the country, reports Efe news.

UN Secretary-General Antonio Guterres, acting Spanish Prime Minister Pedro Sanchez, the new European Commission president Ursula von der Leyen, and Chilean Environment Minister and chair of the summit, Carolina Schmidt, among others, were scheduled to attend the opening ceremony of the 25th Conference of the Parties to the UN Framework Convention on Climate Change.

The summit will include technical and scientific meetings, plenary sessions involving official delegations from nearly 200 countries, attendance by more than 50 global heads of state and government, and leaders of international agencies, as well as a large number of activists and social leaders.

The event will also be attended by 20 European Prime Ministers, the Presidents of Argentina, Costa Rica, Ecuador, Guatemala, Honduras and the Dominican Republic; Morocco”s Prime Minister Saadeddine Othmani; and Prince Albert of Monaco.

The heads of the European Commission, European Council and the European Parliament, as well as leaders from many African and Asian countries were also expected to attend the opening of the summit.

US President Donald Trump would not attend the event, but a delegation defending the government”s stance as it prepares to leave the Paris Agreement, will represent the country.

Initially envisaged as a “transitional” summit, the conference has become particularly important for Spain hosting it in place of Chile, which retains the presidency, as well as for the international community as it coincides with Trump”s announcement to start the process of pulling out of the Paris Agreement.

Chile and Spain hope that this conference will open a new phase in global climate action, which would not only involve the negotiators of the delegations representing central governments, but also local governments, regions and economic and social agents.

The summit, which will continue until December 13, will conclude just two weeks before the Paris Agreement comes into force and the beginning of a decisive year with countries required to make more ambitious commitments to reduce their carbon dioxide emissions.