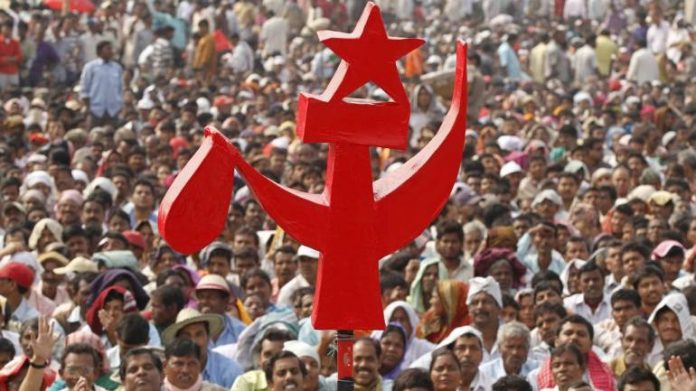 New Delhi:  The CPI (M) Polit Bureau on Tuesday expressed its grave concern over the situation in the state of Jammu & Kashmir and the developments in Assam and the North East. It urged to strictly adhere the Assam Accord and the proposed Citizenship Act (Amendment) Bill must be withdrawn. It also asked the government to resume dialogue with Pakistan. The Polit Bureau also welcomed the developments in Karnataka saying BJP/ RSS attempts to cobble a majority through horse-trading have been thwarted.

Briefing the media about the decisions taken at the meeting of the CPI (M) Polit Bureau held on May 21,  party  general Secretary Sitaram Yechury  said the BJP had “made it a practice to form governments even after losing elections” like they have done in Goa, Manipur, Meghalaya and entering the Bihar government, betraying people’s mandate. He said he along with Polit Bureau Member and Kerala Chief Minister, Pinarayi Vijayan will attend the swearing-in ceremony of Kumaraswamy at Bengaluru on May 23, 2018.

On Assam, the polit bureau said the fragile unity of people belonging to immense diversity in the region has come under a severe additional strain due to “the central government’s efforts to amend the Citizenship Act on the basis of the religious affinity of the people’.

It alleged that the BJP/RSS has been playing with emotive issues for electoral gains that are worsening the situation.  Linguistic minorities are under severe pressure due to incomplete and deliberate discrimination in the process of the updating of the national register of citizens (NRC) and the category of doubtful voters, it added.

“The Polit Bureau reiterates that the Assam Accord must be strictly adhered to and its gains must be consolidated and the proposed Citizenship Act (Amendment) Bill must be withdrawn. Yechury said the CPI(M) in parliament will oppose any amendment based on the religious affiliation of the people to determine their citizenship as it is completely unconstitutional.

He said the Polit bureau called upon all its units to mobilise the people and organize protests against these relentless attacks on people’s livelihood by the Modi government.

He said the people have been put under unbearable economic burdens by the policies pursued by this BJP government. The prices of petrol and diesel have skyrocketed, reaching the highest ever levels and rural distress continues to aggravate.

“The rural economy has never seen such disastrous conditions in independent India as under this government’s rule in the past four years.”

He alleged that the BJP government continues to write off unpaid bank loans to crony corporates who are today refusing to return over Rs. 11 lakh crore of loans taken from the banks.

On Kashmir, he said the Prime Minister Narendra Modi has announced a ceasefire during the month of Ramadan but this is accompanied by certain conditions which by themselves can lead to a rupture of the ceasefire.

“There is the complete sense of alienation still prevailed among the people of the Kashmir valley”.

He said, “The Polit Bureau demands that the central government should implement the assurances it had made earlier to urgently enforce confidence-building measures and start a political process through dialogue with all stakeholders. The Central Government must initiate talks with Pakistan to ensure cross-border terrorism is stopped by a mutually agreed ceasefire along the Line of Control.”

CPI (M) leader said the situation in Jammu and Kashmir cannot be allowed to deteriorate further and the government must take appropriate measures for bringing back normalcy.

“The Polit Bureau noted with serious concern the continuing attacks in Tripura on the CPI(M) and the Left Front by the BJP/RSS ever since it assumed office in the state.”

Party leaders are being attacked even inside the police station where they go to lodge complaints, it alleged.

CPI leader also slammed the West Bengal government saying the recent panchayat election has “exposed the depths to which authoritarian onslaughts can degenerate and undermine democracy”.

“What people have witnessed for the first time is the open forcible occupation of counting booths and not just rigging but changing the final result issuing certificates to candidates who were actually defeated in the counting process”, it added.