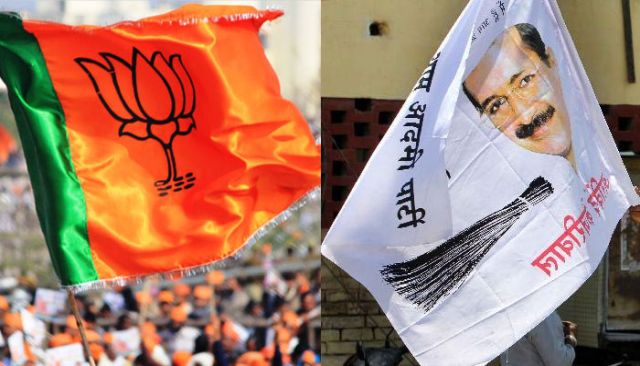 New Delhi:  The Aam Aadmi Party (AAP) on Thursday warned that the Indian democracy is in “danger” due to Narendra Modi government’s EVMs “manipulation” ahead of 2019 general elections given the complete lack of ‘impartiality” on the part of Election Commission of India. The party asked the EC to conduct next elections through ballot papers.

Addressing a press conference here, party’s chief spokesperson Saurabh Bharadwaj and senior party leader and Rajya Sabha MP Sanjay Singh said   the intention of the government on the Electronic Voting Machines (EVMs) is highly suspect and Indian democracy is in danger ahead of the 2019 general elections.

They said the next general elections should be conducted through ballot papers in case the EC cannot ensure 100 % VVPATs.

Bharadwaj said that the Supreme Court had in 2013 ordered the EC and the  Government to insert VVPAT in every EVM to secure the trust of voters but it is not complied yet.

According to the survey about 16,50,000 VVPAT machines should have been stored in the different District Offices by September so that it could be tested and practiced for  its use in 2019 Elections but according to the sources only 3,48000 VVPAT machines have been purchased till now which is only 22% of the total requirement. This simply proves the corrupt strategies of BJP for the upcoming elections of 2019.

Making a serious allegation, Sanjay Singh said that “the votes from the old EVMs which are without VVPAT automatically go to BJP no matter whom the voters vote for.”

The review of any incident of the country be it Kanpur’s Municipal Corporation Election or incident of Bhind in Madhya Pradesh where the DM witnessed the demo and the result was there for everybody to have seen, he said.

He also said that the objections of the political parties can be rejected or avoided but the orders of the Supreme Court cannot in any case be unheard. If any election is held by the end of the year then it will be very easy for BJP to carry out the fraud as the old machines will be used and all the votes shall be automatically cast in favour of BJP.

He urged the Election Commission that it does not conduct elections with the old and rejected EVMs. He also called upon all  political parties to unite and decide on conducting the election process  through  ballot papers, in case the VVPAT machines are not installed for all EVMs.