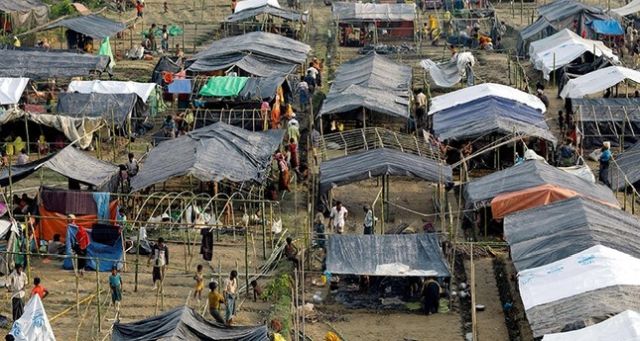 Dhaka, Bangladesh: Bangladesh must abandon its plans to relocate Rohingya refugees to a remote island in the Bay of Bengal, a top global rights group has said.

The island of Bhashan Char has not yet been declared safe for human habitation by the UN and many of the Rohingya refugees are still reluctant to relocate, Amnesty International said in a statement on Friday.

It accused Bangladeshi authorities of pressuring the Rohingya community, currently confined to crammed camps in the southern district of Cox’s Bazar, to consent to being shifted to the disaster-prone island.

Citing media reports, the group said Bangladesh is aiming to relocate 300 to 400 Rohingya refugees to the island in November.

“Rohingya refugees, interviewed by Amnesty International this month, said that government officials in charge of refugee camps in Cox’s Bazar have coerced them into registering for relocation,” the statement said.

Omar Waraich, South Asia head at Amnesty International, stressed that the island has yet to be “deemed safe for human habitation” and there are still “serious questions over this relocation procedure”.

“Based on the experiences of those that Amnesty International has spoken to, many of the Rohingya who have signed up to relocate to Bhashan Char are doing so out of compulsion rather than choice,” he said.

“Any decisions relating to the relocation of refugees must be transparent and involve the full participation of the Rohingya people. In the meantime, plans for any further relocations must be abandoned.”

He called on Bangladeshi authorities to allow the UN to carry out an assessment of Bhashan Char and “immediately return the hundreds of Rohingya refugees currently on the island to their families in Cox’s Bazar.”

The Bangladesh government, meanwhile, is insisting that the Rohingya refugees are willing to shift to the island.

The country’s foreign minister has put forward this claim on several recent occasions, saying last week that a decision has been taken to relocate around 100,000 Rohingya to Bhasan Char from Cox’s Bazar.

“Most of them [Rohingya] have agreed to go there [Bhashan Char]. The relocation process is being delayed only because of pressure from international agencies and NGOs,” AK Abdul Momen was quoted as saying by state-run Bangladesh Sangbad Sangstha news agency.

He said the refugee camps in Cox’s Bazar were overcrowded and disaster-prone, claiming that the remote island offers the Rohingya community a shot at a better life.

“Bhasan Char is a beautiful place; I wish to build a resort there. The Rohingya can work and earn on the island too, be it agriculture or rearing livestock,” the minister said.

According to Amnesty International, more than 750,000 Rohingya refugees, mostly women and children, fled Myanmar and crossed into Bangladesh after Myanmar forces launched a crackdown on the minority Muslim community in August 2017, pushing the number of persecuted people in Bangladesh above 1.2 million.

Some 600,000 Rohingya remaining in Myanmar’s Rakhine State were still the target of a government campaign to eradicate their identity, and were living under “threat of genocide”, according to a UN-mandated Fact-Finding Mission’s report last September as quoted by Human Rights Watch.

More than 34,000 Rohingya were thrown into fires, over 114,000 more beaten, and as many as 18,000 Rohingya women and girls were raped by Myanmar’s army and police, said the OIDA report, titled Forced Migration of Rohingya: The Untold Experience.