Stana (MP)/ New Delhi : A group of radical Hindutva activists belonging to Vishwa Hindu Parishad and Bajrang Dal on Monday gave an ultimatum to 50-year old missionary school in Satna town, Madhya Pradesh to install an idol of Saraswati in the school campus.  The radicals threatened dire consequences if the school management did not fulfill their demand within 15 days. The school known as Christ Jyoti Senior Secondary School is going to celebrate its Golden jubilee of its foundation this year.

Speaking with Muslim Mirror on phone, Father Augustine said they gave the school management 15 days to comply with their demand or face protests in front of the school. 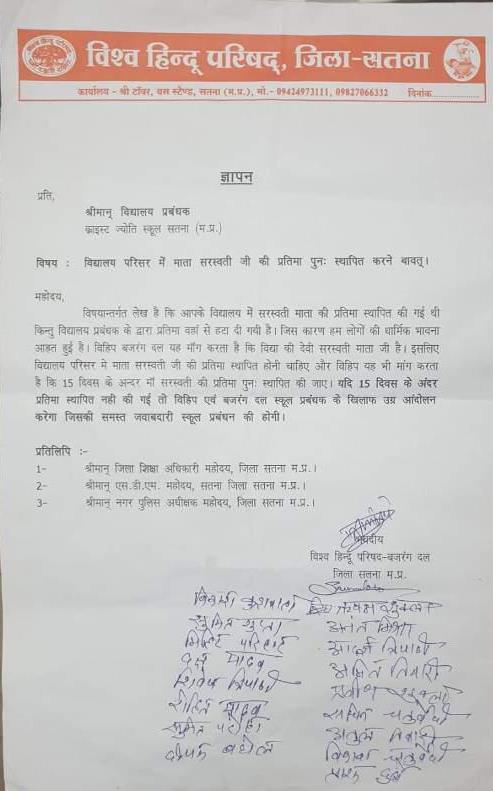 “The radicals forced the priest to give in writing that he had received their memorandum that he accepted at the school’s main gate.  The Hindu activists left the place with a warning to come back in case the school failed to comply with their demand.  They claim that the school was built at a place where the idol of goddess Saraswati had existed”.    Father Augustine pointed out to them that the school was built 49 years ago and no one had made such a claim until now.

The Bajrang Dal activists did not misbehave with the priest but they raised slogans of “Jai Shri Ram”, he said and added that the Satna Police had informed us that a delegation is coming to the school to submit a memorandum.

He also pointed out that the idol demand is politically motivated as a bye-election to some assembly seats is scheduled next month.

The Syro-Malabar diocese of Satna manages the school. Satna town is some 455 km northeast of Bhopal, the state capital.

This the second case of harassment of Catholic schools by Hindutva groups this year in the BJP-ruled Madhya Pradesh.

On February 22 the police registered a case against Sister Bhagya, a member of the Sisters of Destitute and principal of Sacred Heart Convent High School in Khajuraho of Chhatarpur district.

The nun was accused of attempting to convert a former female staff member. She had to obtain bail from the Madhya Pradesh High Court to prevent her arrest.