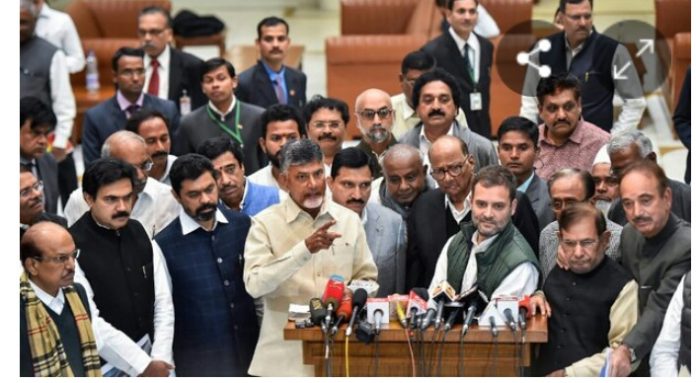 It is a good Omen that various political parties, both national and regional, who believe in secular polity and are opposed to BJP’s blatant communal and fascist agenda, are trying to come close to each other and develop mutual understanding and strategy to defeat RSS led BJP once for all. Congress, after a longtime, is demonstrating its political maturity, astuteness, patience and deft handling of expected political partners. In the air, if I go by public opinion and concerns, I can smell a crushing defeat for the BJP. We can see many rats jumping out of the sinking boat.

I wish I could assure everyone of a humiliating defeat of the Amit-Modi duo. What I am afraid is not the votes that will go for the BJP, but the strong apprehension that the votes cast for secular alliances may be very strategically and in a well calculated manner diverted towards BJP.

There are many indicators and analysis that prove that three things played an important role in the historical win of BJP in 2014. First the media , specially the electronic media.It were the Media Houses , remotely controlled by Powers in Gujrat, that were running a campaign to bring Modi in the centre stage of politics and indulging in witch hunting of Congress and other partners in UPA alliance from the very beginning of the second phase of the UPA government in the centre.It portrayed Modi as the second Ram in coming to save India from the clutches of “hugely corrupt regime” led by Dr Manmohan Singh and Sonia Gandhi.Media projection against the duo was so strong and persistent that it never allowed people to check the veracity of the propaganda. And people, specially the educated class was swayed away by this vicious propaganda and opened its arms to hug and welcome the devil projected as second Ram.

The second card that the RSS+BJP+VHP +Bajrang Dal+ Hindu Yuva Vahini played was the anti-Muslim card all over the country. Since my student days at Aligarh I have never seen or watched such a venomous and aggressive campaign to demonise a community as a whole, as if they were responsible for all the ills that India was facing with. First , They demonised Muslims and then accused the Congress of Muslim appeasement although the world knows that during the long stay of Congress in power Muslims gained nothing. Truth is that they suffered at all fronts to the extent that Justice Sachar Committee, in a well-researched document, had to declare them as the socially and educationally most backward community. Isn’t it an irony that the people who ruled India for almost eight hundred years , and made India Super Power of the time, were gradually pushed to the lowest rug of the society just within a span of 50 to 60 years after the independence, under a constitution which is considered as the best and the most just – ever drafted by human hands.However all this vicious propaganda by Hindutva forces supported by a large section of the media was aimed at Hindu- Muslim Polarization.

The third important factor behind the BJP’s huge success in the 2014 Parliamentary election was the EVM ( Electronic Voting machines). Although nothing very substantial has been proved against it, but it is also a truth that it can be manipulated remotely and the election results can be pre-ensured. There are people inside and outside the country who have very convincingly demonstrated how these EVMs can be hacked from outside. Moreover, to the best of my knowledge , these EVMs were built in Gujarat where Mr Modi had an octopus like control on each and every state or non-state machinery .Earlier very advanced and developed nations had tried to use EVM in the election to make the election and counting process easy and time saving. But after seeing its vulnerability to be misused, these developed nations abandoned these machines and went back to manual voting system. Why BJP is adamant on the use of EVM is itself evidence that 2014 election results were manipulated and BJP is still hoping to have that manipulation in its favor.

This time the BJP knows that the communal card will fail. A large majority of Indians have seen the falsehood of BJP through the prism of its performances and promises at different levels and sectors. Those who love this country have understood well that BJP is a party of lies and bluffs. Its corrupt face has been well exposed in the RAFAEL deal. Media is still backing BJP, but there is a small section of media and journalists which have not only exposed the falsehood of BJP , but also its hand-in- glove relationship with the media barons.

.So the public is no more the blind believer and follower of their propaganda.And BJP knows this too. The trump card that the BJP still holds is the use of EVMs in the forthcoming election.People and political parties should not be misled by the election results in Chhattisgarh, Madhaya Pradesh And Rajasthan. It may be simply a game of deception or the result of under calculations.

We have been watching how throughout this regime, every organ of the governance have been saffronised and balatantly misused. Even Judiciary’s independence has not been left untouched and chaste. There are many instances that show how Modi’s government meddled with the independence of judiciary. The latest example is the audio tape released by Karnataka Chief Minister in which Mr Yedurappa can be clearly heard claiming that his leaders Amit Shah and Modiji will manage the judges.Election Commission is a constitutional body and an independent authority. But who knows how far Election commission has been saffronised. If Election Commission has lost or surrendered its autonomy, the whole democratic system is in danger. It is the time, therefore, for all the political parties to come together not only to jointly context the election, but first to oppose the use of EVMs. They must launch a street battle together against EVMs and question its rationale. And that will be a test of the real loyalties of these parties, Those who take a lead against the use of EVM, those are the real opponents of the BJP, and those who join the opposition camp but are not keen to take fight against EVM, are actually somewhere in tacit understanding with BJP. BJP is not fool to go for a sliding victory this time by manipulating EVMs at mass level to make the international opinion against the EVM-generated election results. It is a party of very cunning and shrewd people. This time , its target will be just to emerge in a magnetic situation after which each and every loyal industrial houses will be assigned the task to purchase various bunches of MPs from different parties.Mayawati’s BSP and Sharad Pawar’s NCP will be the most vulnerable.

Congress must take the matter seriously and instead of confining Priyanka Gandhi to Eastern UP, it should give her the command of anti EVM front. As a replica of late Mrs Indra Gandhi, she has the potential and charisma to create a storm in the political arena. Misuse of EVMs is like usurping the electoral right of each and every Indian-whether Hindu or Muslim or Dalit, or forward or backward. And I have a strong sense that Priyanka holds that magic in her personality to lead a fight and take people above their cast and creed interests.