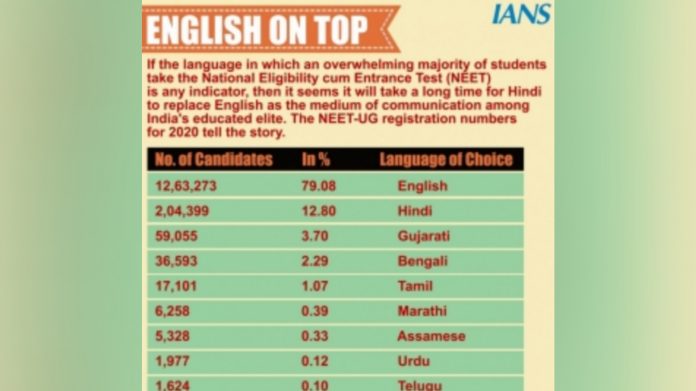 New Delhi : After the implementation of the New Education Policy in the country, English is no longer compulsory as the first preferred language in many important competitive examinations, schools, colleges and even appearing for engineering and medical entrance examinations.

These competitive exams are now being conducted in English, Hindi along with 11 other regional languages. However, English is still the first choice preferred by the Indian students.

The number of students appearing for various competitive examinations in Hindi and other regional languages is much lesser in number.

“Statistics from the National Testing Agency (NTA) showed that in important entrance exams such as National Eligibility-cum-Entrance Test (NEET) for pursuing medical education, nearly 79 per cent students chose English as the medium of writing the examination in 2021. Nearly 13 per cent of the students chose Hindi as their preferred language while the number of students opting for other regional languages was nearly 8 per cent.”

Discussing NEET, one of the most important competitive examinations in the country, NTA, which is the organisation conducting this exam, says that the medium or choice of language depends on the candidate and the NEET question paper will be made available this year in 13 languages also.

The National Testing Agency also says that it has to be kept in mind that the choice of regional languages will be done on the basis of location of the NEET examination centre.

According to renowned academician, C.S. Kandpal, the major reason behind the preference of English as the first language in competitive exams is the school education that the students receive.

“Our school education system is still based on English. This is the reason that after leaving school, when a student looks towards his future career or pursuing higher education, he or she chooses English for giving the next examination because while studying in school, he or she has studied various subjects in English only,” says Kandpal.

All candidates opting for regional languages will also be provided with a bilingual test booklet in their chosen regional language and English. In case of any inaccuracy in the translation of any question, the words written in the English version of the question paper will be marked as final.

On the other hand, in the Civil Services examination in 2019 of the 326 civil servants, who pursued a foundation course at Lal Bahadur Shastri National Academy of Administration (LBSNAA), only eight wrote their exam in Hindi. In contrast 315 candidates had chosen English as their medium for writing the examination.