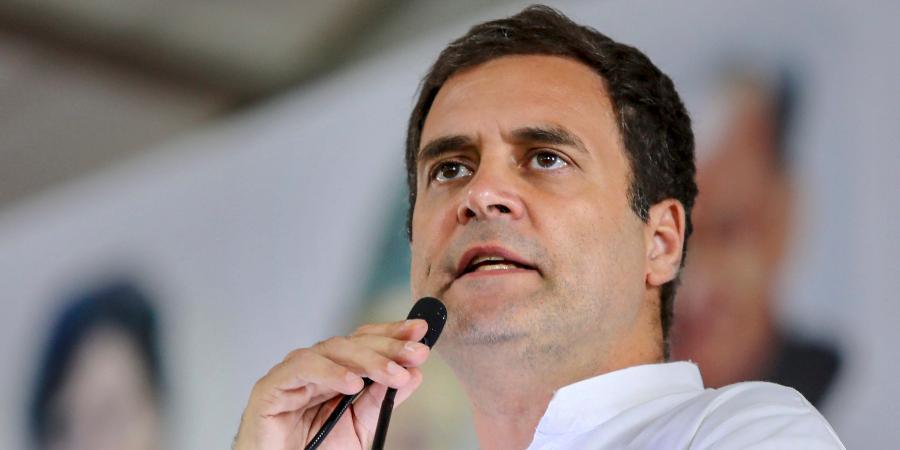 New Delhi: Congress leader Rahul Gandhi on Thursday sharpened his attacks on Narendra Modi and the BJP-led government at the Centre over the three contentious farm laws and said there was “no democracy” in India as anyone who dared to stand up against the Prime Minister are either labelled “terrorists” or “anti-social”, even if that person “be (RSS chief) Mohan Bhagwat”.

Speaking to the media after meeting President Ram Nath Kovind at the Rashtrapati Bhawan along with senior party leaders Ghulam Nabi Azad and Adhir Ranjan Chowdhury, Gandhi said, he has urged the President to ask the government to reconsider the farmers’ demands as the agitators will not be demoralised just by making them wait at the borders of the national capital.

He said the farmers consider the new laws against their livelihood and would not give up until their demands are met.

“There should be a joint session of Parliament and the new laws should be rolled back. The entire opposition is with the farmers and will remain so until steps to undo the wrong done on farmers is afoot.

“We did not go to the President alone but took along with us two crore signatures seeking these demands. farmers are facing hard times. In the cold they are toiling and some have even died. Prime Minister Modi has to hear them,” Gandhi said.

“Why doesn’t the PM listen when there is still time to make amends. I had spoken out against the late and lackadaisical attitude of the government when the Corona pandemic broke out. They were slow.

“Now again they are not doing the needful while time is of essence. No government can withstand the force of the farmers, labourers, common man. Whoever will try to stand against them will not do well.

“For our PM has crony capitalist to favour,” Gandhi said answering a query on why the farmers were being branded “terrorists and leftists”. “They will be called a terrorist — be it farmers, labourers or anyone. If one day even Mohan Bhagwat stands up against him he will be branded terrorist. Anybody absolutely anybody who try to take away power from these people will be crushed as terrorists,” he said, referring to the chief of the Rashtriya Swayamsevak Sangh (RSS).

The RSS is the ideological mentor of the Bharatiya Janata Party (BJP).

This was Rahul Gandhi’s major attack on the Centre over the farm laws despite his early and initial tractor movement in Punjab right after the “black laws” were passed.

“We stand alongside our farmer brothers and sisters. We are opposing the three farm laws. The way in which these laws were passed without debating and without discussing it with farmers and labourers shows it was undemocratic in nature.”

He said that no one can withstand the farmers’ courage and agitation. “If the three farm laws are not repealed then it is not only the BJP or the RSS but the entire country will pay for it. Farmers, labourers are the backbone of this nation. By robbing them of their livelihood this government is harming the entire nation. It is only aiding the crony capitalists which it keeps close by,” Rahul Gandhi said.

“Those who try to stand against Modi’s leadership, will be thrashed and beaten that is their way of handling things. But it will not work. Not this time, not ever. They will have to understand,” he said.

“He (Modi) is working for a few capitalists,” he said.

To a question that several Congress MPs have been detained, he said, “This is their way they can detain, beat them.

Asked whether it was a good example in a democracy to muzzle the voice of dissent, by detaining political leaders, Rahul Gandhi said, “Which country are you talking about. Are you talking about India — then democracy can only exist in your imagination and not in reality.”

He slammed the Centre’s stance since November 26, when the first batch of farmers from Haryana and Punjab landed at Singhu and Tikri borders and said the Narendra Modi government has to do better, listen to the multitude at the border.

“We met the President and told him that these farm laws are anti-farmer in spirit. The country has seen that farmers have stood up against these laws and they will not relent,” he added

He said to the government: “Make no mistake these farmers will not go back till their demands are met.”

“Modi and BJP has only one ambition and this is something that the farmers and the labourers have understood. Modi is working for the three to four crony capitalist friends,” he charged.

“If Modi doesn’t take note now then everything will be destroyed. If the livelihood of this vast million is destroyed it will also destroy the system,” said Gandhi.

“It is very simple thing, there are millions of lives dependent on the agriculture sector”.

“Lakhs of our population are depending on farmers, labourers, small traders. They are the backbone of the country. We understand reform is required, but when you bring laws without discussion you create massive unrest,” he said.

“Why is the Prime Minister doing this because he wants to help two or three businessmen.

“He then will construct whatever narrative he has to create. He will call people terrorist, anti-national,” he said.

He further said that remember one thing, China is sitting on the border. “It has snatched thousand km of our land, why is Modiji silent on that?” he questioned.

“On the one hand the government is breaking down entire system, and on the other hand you are attacking your own farmers, labourers, making them your bigger fight. While the enemy countries are watching us. And they are viewing it as an opportunity. I am giving warning that look what is happening. Our country is going face very big damage,” he warned.

He also said that lakhs of people are at the Delhi borders. “Have they come to eat sweets? The question is who is doing the investment and who will take the profit.

“In the agricultural system of India, farmers and labourers have done investment, the parents of the soldiers are doing investments. And it is the industrialist reaping the profit,” he said.

Slamming the Prime Minister, the Congress leader said, “You have an incompetent man, who does not understand anything and is running the system on behalf of three or four other people.”

He accused that they take huge amounts of money from the pockets of poor and put it in the pocket of the industrialists. “And that is what we are fighting against,” he said. Once called the “scaremonger” during his attack on the government’s measure to contain the pandemic, Gandhi said he has always been right, but the narrative is created to discredit him.

“This is an assault on the idea of India,” he added.

Several of the Congress leaders including Priyanka Gandhi Vadra were detained and taken to Mandir Marg police station for violating Section 144 clamped in the New Delhi area in the backdrop of the Congress march from Vijay Chowk to Rashtrapati Bhawan.