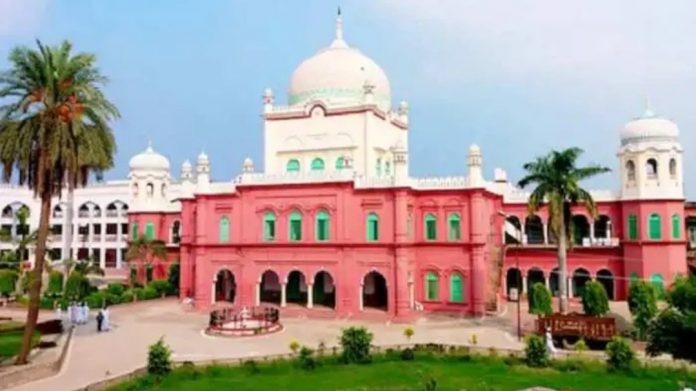 The district officials named 306 other unrecognized Islamic education institutions in their report as illegal.

” Information about 306 illegal madrasas that were traced was sent to Administration. Darul Uloom is also an illegal madrasa and is deprived of scholarship and other schemes,” Bharat Lal Gond, District Minority Welfare Officer said.

“An investigation was done on basis of parameters set by the Administration like the year of establishment of the madrasa, the society that runs it, name of the madrasa, and their source of income,” he added.

Whatever decision the the administration takes , based on that complaint will be filed,” BL Gond further said.

As per report more than 750 madrasas are registered with the district administration. Of which 664 runs up to 5th grade, 80 are upto 8th grade ,and the remaining 10 madrassas are class10 bound.

One month ago ,the UP government started the process of conducting a survey of madrasa.

According to the government order, the survey will be on the basis of 12 aspects. The teams of officials for the Madrassas survey have been constituted by District Magistrate (DM) as per government order.

Earlier, the UP government declared to conduct a survey in unrecognized madrassas to ascertain information on the number of students, teachers, curriculum, and its affiliation with any non-government organization. The survey of unrecognized Madrassas is conducted to ensure the basic facilities of the students of Madrassas.

Danish Azad Ansari Minister of State for Minority Welfare, Muslim Waqf and Waqf Department has informed that the order also holds to give maternity leave and child care leave to women employees working in madrasas in the light of the rules applicable in the Department of Secondary Education and Basic Education.

All the District Magistrates (DMs) in Uttar Pradesh have been issued instructions regarding the survey. The government has also ordered holding a survey of unrecognized madrassas by October 5. The teams will constitute officials of the Sub Divisional Magistrate (SDM), Basic Shiksha Adhikari (BSA), and District Minority Officers.

Moreover, it has been ordered that in case of a disputed management committee or in case of the death of any employee in an aided Madrassas, a post-facto approval for appointment by the principal Madrassas and District Minority Welfare Officer in the dependent quota of the deceased and the existence of a valid management committee has to be sought. (With Agencies inputs.)

Darul Uloom asks students to attend weddings only during holidays