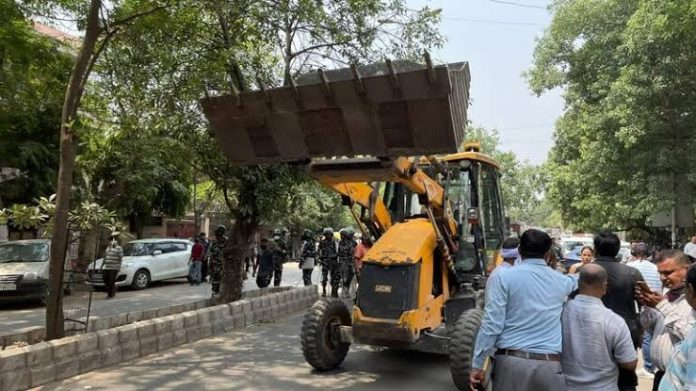 GUWAHATI/AGARTALA : Besides other parts of the country, the BJP’s bulldozer politics has also drawn severe criticism both from the political spectrum and the courts in the northeastern states especially in Assam and Tripura.

During his recent three-day (May 8-10) visit to Assam, Union Home Minister Amit Shah said that 10,700 bighas encroached upon by infiltrators have been freed.

The Assam government has also cleared over 3,800 hectares of forest land of encroachments during the past few years.

The Assam government had last year undertaken eviction drives in different districts on the pretext of freeing government land from encroachment. Various opposition parties including the Congress had criticised the BJP government for evicting the people without making alternate settlements.

In one of the violent eviction drives, two persons, including a 12-year-old boy, were killed while 20 others were injured when the police used force against unarmed people protesting against the drive in Darrang district on September 23 last year.

A video of the clashes, which went viral, also showed a photographer engaged by the Darrang district administration stomping on the body of a man shot by the police.

The eviction drive was launched by the police and the district administration to vacate 4,500 bighas (602.40 hectares) of government land, allegedly encroached upon by several hundreds of Bengali-speaking Muslim families in Darrang district.

Hearing a public interest litigation filed by Debabrata Saikia, Leader of Opposition in the Assam Assembly, the division bench of the Gauhati High Court headed by the then Chief Justice Sudhanshu Dhulia (who was recently elevated to the Supreme Court) had termed the Darrang district incident as “a big tragedy and very unfortunate” and directed the state government to file a detailed affidavit in the matter.

“This was a big tragedy, very unfortunate. Those who are guilty, if at all, must be punished, no doubt about that. Khoon zameen par gir gaya (blood has been spilt),” the Chief Justice had remarked.

The court wanted to know whether the National Rehabilitation Policy is applicable in Assam, and directed the state government to file a detailed affidavit in the entire matter within three weeks.

The Assam government had ordered a judicial inquiry into the incident.

Assam government officials said that around 800 families of Bengali-speaking Muslims were unlawfully occupying about 4,500 bighas (602.40 hectares) of government land for many years and the government recently decided to use the land for agricultural purposes by removing the settlers.

Besides various opposition parties including the Congress and the Badruddin Ajmal-led All India United Democratic Front (AIUDF), the All Minority Organisations Coordination Committee, which includes the All Assam Minority Students Union and the Jamiat-e-Ulema, among others, had organised a series of agitations against the eviction drive.

Muslims comprise 34.22 per cent of the 3.12 crore population of Assam, of which 4 per cent are indigenous Assamese Muslims and the remaining are mostly Bengali-speaking Muslims.

In Tripura, after the BJP government wrested power from the Left parties defeating the CPI-M led Left Front, it bulldozed 185 CPI-M party and Left trade union offices across the state alleging that all these party offices were set up on government land.

“The BJP not only bulldozed the physical structures of the opposition parties, they are also bulldozing the society, mindset of the people, communal harmony and the democratic structures of the country. They are not maintaining the demarcation between the party and the government,” Chaudhury told IANS.

Supporting the BJP government’s stand and action, the party’s Rajya Sabha member Manik Saha said that the government has been doing its work as per the law.

“If any party or individual occupying the government lands and properties, these should be vacated by the law enforcing agencies. A few of our party offices were also removed in Tripura,” Saha, who is also the president of the BJP Tripura unit, told IANS.

After coming to power in the politically important Agartala Municipal Corporation (AMC), the civic body led by Dipak Majumder evicted many hawkers from shops in the capital city.

Almost all opposition parties and civil society activists criticised the AMC’s action. They argued that without making alternate arrangements and rehabilitation of the hawkers, the authority should not do this unilaterally. – IANS