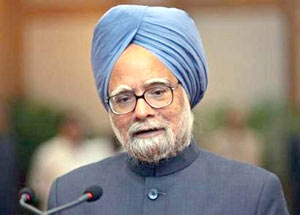 New Delhi, Dec 24: Reiterating his plea for maintaining peace, Prime Minister Manmohan Singh, in a televised address Monday, assured the government would examine without delay the police response to the savage gang-rape of a 23-year-old woman.

Manmohan Singh expressed sadness over the clashes between protesters and police that have left scores injured and said all steps would be taken to ensure the safety and security of women in the country.

Terming the outpouring of public protest as “genuine and justified anger and anguish” , Manmohan Singh said he felt strongly about the gangrape as “a father of three daughters”. He said while anger over the crime is “justified” “violence will serve no purpose”.

The prime minister’s statement comes as the father of the young woman appealed for peace and also asked people to pray for his daughter, who is in a critical condition in hospital.

“I appeal to all to refrain from vandalism and help the police so that the process of capturing and sentencing the culprits is successful,” the father told TV news channels.

The prime minister issued the appeal after the national capital was witness to largescale protests and also violence over the Dec 16 gangrape.

Manmohan Singh said his wife and family were all “joined” in their concern for the young woman.

“As a father of three daughters myself, I feel as strongly about this as each one of you. My wife, my family and I are all joined in our concern for the young woman who was the victim of this heinous crime. We are constantly monitoring her medical condition. Let us all pray for her and her loved ones during this critical time.

“I also feel deeply sad at the turn of events leading to clashes between protesters and police forces. Anger at this crime is justified but violence will serve no purpose. I appeal to all concerned citizens to maintain peace and calm. I assure you that we will make all possible efforts to ensure security and safety of women in this country. The Home Minister has already spoken about the steps being taken.

“We will examine without delay not only the responses to this terrible crime but also all aspects concerning the safety of women and children and punishment to those who commit these monstrous crimes. Our Government will keep you informed of the steps we are taking and the processes we are following.

“I appeal to all sections of society to maintain peace and help us in our effort,” was the prime minister’s appeal.

On Sunday night, the Prime Minister’s Office had tweeted his appeal for maintaining peace.