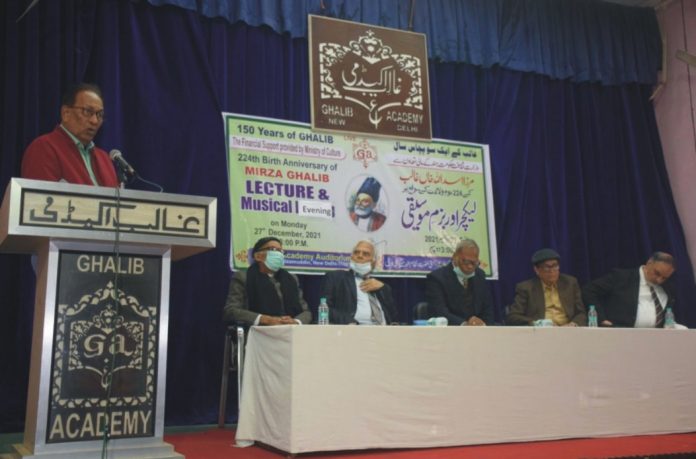 New Delhi: Ghalib Academy, New Delhi, organized an impressive literary event on December 27, 2021 at its auditorium to celebrate the 224th birth anniversary of one of the greatest poets of all time Mirza Asadullah Khan Ghalib (1797-1869). While paying rich tributes to the immortal poet, noted academics described Ghalib as one of the best Urdu poets of all time and one of the world’s greatest poets who also made the art of Ghazal singing as the most popular form of musical world.

The function was organized with the financial support of the Ministry of Culture, which was presided over by Dr. Gulshan Rai Kanwal, the chairman of Ghalib Academy governing council.

Shedding the light on Ghalib’s period, Dr Rai said the Mughal Sultanate was confined to the Red Fort. Mughal rule came to an end after the 1857 mutiny and the British established complete control over the country.  The colonial masters carried out many reforms and every sphere of life was witnessing a change. He said Ghalib welcomed these new changes and new regime.

Speaking on the occasion, Prof. Sharif Hussain Qasmi also highlighted the events of those tumultuous days. Prof Qasmi stated that poems were recited in honor of the king. The king thought that he was being ridiculed and mocked. There were conspiracies and plots in the fort and the king’s rule was almost over.

In his lecture on “Ghalib and 19th Century,   Prof Jagdishwar Chatturvedi said in Ghalib’s time creative works started getting published. During his lifetime, Ghalib’s works and letters were published. Ghalib’s period witnessed fast-paced changes across the board. Ghalib saw a political system coming to an end and  the emergence of a new political system. In Ghalib’s time, Urdu was spoken and understood in a large part of India. He said Urdu was the lingua franca in the subcontinent and Hindi was only confined to business classes who used to fill their account. ledgers.  Separate departments of Urdu and Hindi were established in Fort William College.

Continuing his speech, Prof Chatturvedi said it is difficult to understand Ghalib’s poetry and there is a need to explain his poetry in detail. He also stressed the need of analyzing Ghalib’s literary works.

Delivering a paper  on the topic  ‘Ghalib and Ghazal Singing’ Prof Sadiq  underlined that during the time of Mirza Ghalib, there were artists such as Himmat Khan, Raga Ras Khan, Bahadur Khan, Gulab Singh who were notable among others. During the 20th century, Ghalib’s ghazals were performed by artists such as Kundan Lal Sehgal, Talat Mehmood, Akhtar Bai, and Suraya Begum Akhtar. After this generation, artists like Jagjeet Singh, Chitra Singh, and others followed their footsteps and earned fame. Afterward many more artists joined this genre of singing and gained popularity and received recognition in the Subcontinent.

A ghazal-singing session was held at the end. Mr. Ashwin Bawa charmed the audience with his lovely renditions of Ghalib’s ghazals. He was accompanied by Saeed, Kavi Das, Kumar Sanjeev Sarangi, harmonium and table.