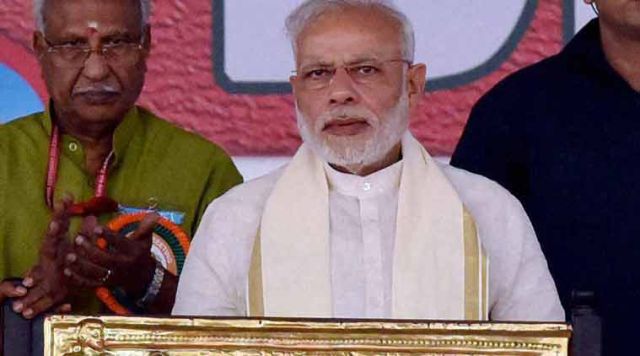 New Delhi : Declaring that his battle against corruption was “uncompromising”, Prime Minister Narendra Modi on Monday said those indulging in graft cannot escape, as the BJP endorsed the government’s fight against terror and black money and lauded the handling of the Doklam military standoff with China.

The day-long meeting of the BJP’s National Executive, attended by over 2,000 delegates, including Chief Ministers, MPs, MLAs and state unit chiefs, adopted a political resolution in which the vision of a “New India” was unveiled that included freeing India of poverty, terrorism and separatism, casteism, appeasement politics and corruption while focusing on cleanliness.

In his valedictory address, Modi said the battle against terrorism would continue and disclosed that 90 hardcore wanted terrorists have been deported to India from other countries.

“My battle against corruption will be uncompromising. Anybody caught in this cannot escape. I have no relatives,” Modi said.

At the meet, the Prime Minister was hailed for bringing international focus on the role of Pakistan in sponsoring terrorism against India and for the resolution of the Doklam military standoff with China.

The resolving of the Doklam crisis reflected the political and diplomatic maturity of Modi who had talked to Chinese President Xi Jinping and hailed his policy of neighbourhood first, according to the party’s political resolution.

“It was an extraordinary success of the government,” Transport Minister Nitin Gadkari said, briefing the media on the political resolution.

The resolution hailed several decisions the government took in the last three and half years on economy, agriculture, terrorism and international relations.

The one nation, one tax GST regime was hailed as the biggest economic reform since independence.

Modi took on the opposition for criticism of his government saying “harsh language cannot be a substitute for any substantive charge against the government”.

“The opposition used power for consumption. They do not know how to sit in the opposition,” he said.

Briefing the media on the Prime Minister’s closed door speech, Finance Minister Arun Jaitley quoted Modi as saying that the BJP was not a conventional party just to fight and win elections but an instrument of serving people.

“Democracy is beyond that. For a political organisation, elections is only a part but the main attempt is to make it as an instrument of mass participation. Till a political worker does not participate in it, it would not be a success,” Modi said.

Jaitley said these two were the basic points of the Prime Minister’s speech.

Modi referred to the expectations and aspirations of the people and the atmosphere that was prevailing now.

Coming down heavily on Congress Vice President Rahul Gandhi, BJP President Amit Shah said his party totally opposes politics of dynasty and appeasement and only believes in politics of performance.

In his presidential address, Shah said the government was working towards ending the suffering of the people of the country and fighting corruption and terrorism.

Railway Minister Piyush Goyal, who briefed the media on Shah’s closed-door address, said the party President noted that Gandhi had hurt the dignity of the nation by saying on foreign soil that dynastic politics was the way in India.

“The BJP rejects the politics of dynasty and appeasement. Condemning Gandhi’s statement, the BJP President said the party believed in politics of performance and not appeasement or dynasty,” Goyal said, citing Shah.

Shah also questioned Gandhi over scams during the UPA rule which he said were to the tune of Rs 12 lakh crore.

“What did he do against his corrupt government. They (Congress) kept the nation poor, deprived of development. Why did Rahul Gandhi allow the policy of appeasement to grow,” Shah asked.

Amid concerns over slowing economic growth, Shah lauded the government’s efforts to boost the economy and hailed its actions like demonetisation and introduction of the Goods and Services Tax (GST).

Shah said fundamental changes in the economy would make India a world leader.

Senior BJP leader and Union Minister for Road Transport and Highways Nitin Gadkari acknowledged that there were “some problems” with the economy but assured that the government was correcting them on a “war footing”.

He attributed the slowing down of India’s economic growth to the “big reforms” undertaken by the government and said that the crisis was temporary.

“When big reforms take place, some problems arise in the beginning. The government is working on a war footing. We are taking steps in this direction,” Gadkari said.