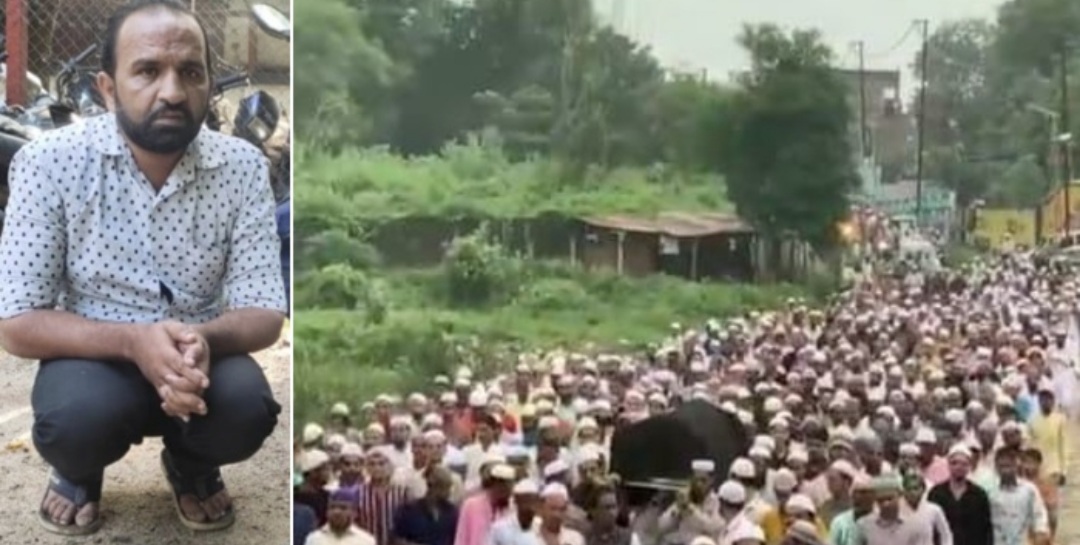 Qasam was a resident of Godhra. He was an ordinary simple man known and respected for his kind-hearted and hardworking nature. He was merely 35 and has left behind a wife and two sons, 13 and 16. He used to work as a labourer in a factory and worked hard to feed himself and his family. But like millions in the country and around the world, the Corona pandemic cost him his job, after which he started a pakoda install. The little self-employment provided meagre but enough income to keep a small and contented family going. Little did they know that 14 September 2021, would be one of the worst days in the history of Islamophobia in India when an unimaginable tragedy would befall them.

On 14 September 2021, he was returning to Godhra on his motorbike from Sewalya where he had gone for some work. As he approached Bhamia Chokdi on Ahmadabad Road he was stopped and arrested by the police.

Police claimed that it had arrested Qasam on a tip-off from an informant to police officer H. N Patel that Qasam was carrying beef. Acting upon the tip-off, a police team consisting of constable Sidhraj Gagendra, sub-inspector N R Rathor rushed to the point where Qasam was stopped and arrested.

After being arrested, Qasam was taken to B Division police station of Godhra. The in charge of this police station, H N Patel, is has earned notoriety as an Islamophobe.
Qasam’s sister Bilqis and brother-in-law, Qasim, were allowed to see him six-seven hours after the arrest, at about 8pm. Qasam told them that before being arrested he was taken and presented before a vigilante court of Hindutva goons where he was beaten red and blue. Two Hindutva goons, Pragnesh Sony and Pratik Kharadi, are known to lead these vigilante gangs.
Qasam’s friend Sahil also went to see him the same day in the evening and Qasam told him too that he had been mercilessly beaten.

On 15 September, Qasam’s brother-in-law Qasim went to see him again in the morning and was again told by him that he was beaten all the night long. He also said they went through the numbers stored in his mobile phone, selected some of these and forced him to name them, especially women, as his accomplices. These names were at last included in the FIR. According to the deceased, when he refused to name them, he was again beaten.
Qasam told his friend and relatives that the goons belonging to cow vigilante groups were allowed in the police station who took turns to beat and torture him. Qasam narrated the same story to his elder brother Bilal who saw him in the police station on 15th September and requested him to get him out of there. Qasam said that the in charge of police station H N Patel had warned him that after discharging his official duty during the Hindu festival Ganpati Visarjan he would hang him upside-down.

On 15h of September when Qasam’s brother-in-law, Qasim, went to see him again in the night, Qasim told him that constables Bhaskar and Ramesh had beaten him again and had left only a while ago. According to the deceased’s statement to his relatives, H N Patel had told him that he had already done an ‘encounter’ [extrajudicial killing] in Lunavada, Gujarat, and would do another one in Godhra too.

The next morning, 16th September, Sahil went to the jail with some tea and breakfast for Qasam but was shouted at and made to go away. He again went there at 10am and was again shouted at and made to leave.
At about 10.30am a police constable named Saleem went to Qasam’s elder brother Bilal’s house and told him that there was an emergency and he would have to go with him to the police station. He then told him that his brother, Qasam, had committed suicide.

An elder of the extended family, Showkat, also accompanied Bilal to the police station where they were shown the dead body of Qasam, claiming that he had committed suicide.

Besides H N Patel there were other police officials present in the police station. They informed the Judicial Magistrate with their concocted story. He arrived at about 12am. His first question to them was: Why Qasam had not been presented before the court withing 24 hours of his arrest.

Then the magistrate and the police officers met in a room. One wonders what was discussed and decided. However, after the meeting, Qasam’s dead body was sent for post-mortem.

According to police’s script, Qasam had hanged himself with a rope and committed suicide. Even the CCTV footage gives this impression. However, those who are aware of the surroundings and the structure of police lockups in India say that someone hanging himself inside a lockup is impossible.

The police is trying to give the impression that in order to take his own life Qasam tied a rope or a bedsheet with a grilled gate that is only at the height of 4ft from the ground. (Please see the photo). Police’s extraordinary explanation for this is that when Qasam found that such a low height was not enough to hang himself, he bent his legs and dangled himself until death.

According to Qasam’s relatives and family members, this is unthinkable that a simpleton like Qasam could plan and prepare his own execution like this.

Sadly, the killers of Mohsin Sheikh, Hafiz Junaid, Pehlu Khan, who are still roaming free, Qasam’s killers too will go unpunished. The chances of custodians of law showing utter contempt to country’s laws being punished are almost nil. Let it be said that with the killings of innocent people at the hands of the custodians of law, the spirit of democratic values of this country are also being prepared for their last rites. By the time the majority community rejoicing over ‘Muslims being taught a lesson’, realises the harm done to them and to their future generations, this will be too late.

If the comment of Indian police becoming a Hindutva force and a law onto itself sounds bizarre, then look at the fact that the police authorities are required to present a detainee before a court of law within 24 hours of his arrest. But Qasam was illegally kept in police custody for three days and was killed in cold blood.

***
Translated and slightly abridged by Urdu Media Monitor from Samiullah Khan’s Facebook
The writer is a young activist and General Secretary of Campain for Peace and Justice.