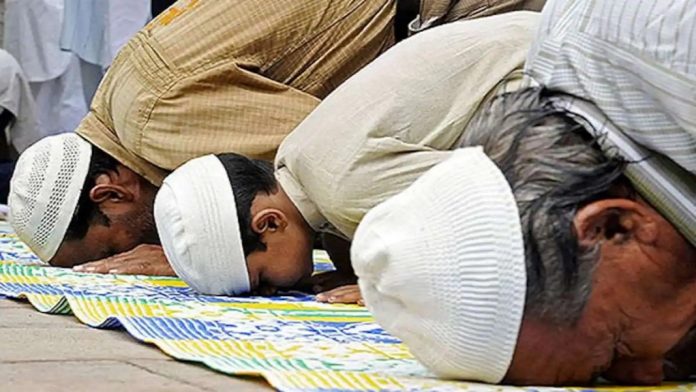 Bajrang Dal members interfered with Friday’s namaz in Gurugram’s Sector 69. A Live Hindustan employee can be seen advising Muslim worshippers in a viral video not to offer their prayers in public places.

“This is not Udaipur; this is Gurgaon,” Amit, who is a part of the Bajrang Dal, is heard saying in one of the videos. He was among those who protested against offering namaz in open spaces in Gurgaon last year as well. He told the media that the people who had arrived to pray were “from outside”.

“It does not matter whether they have permission to pray at six locations or not. We will not allow namaz to take place in the open. We will scale up the protests if prayers continue in the coming weeks,” he said.

Praveen Saini alias Praveen Hindustani, district coordinator of the Bajrang Dal, told the media, “They are lying and saying that they have been praying here for 15 years… CM saab ke spasht aadesh hain ki khulle mein namaz nahi hogi (the CM has clearly said that namaz will not happen in open spaces).”

One of the members of the Hindutva group that disrupted the namaz is heard saying in the video, “We did not even know that Muslims come in thousands and pray here… What happened is that a few Fridays ago, I was passing by and there was a traffic jam. That was when I realised namaz is offered here. People come even from outside for namaz here… Hume bahut ghabrahat hui… They are gathering here today, tomorrow somewhere else…This when the Haryana government has said namaz should not be offered in open spaces.”

Police said they had sent a team to the area and were looking into the matter. No complaint has been received so far, they added. Police sources said namaz is currently being offered at six locations in Gurgaon — at three locations in Udyog Vihar, near water tank in Sector 43, Leisure Valley and at HUDA ground in Sector 69.

“Today afternoon, some members of the Bajrang Dal started sloganeering and disrupted namaz prayers at a ground in Sector 69. The incident remained peaceful. The said ground is HUDA land and is among six locations where namaz is offered. We are yet to receive a complaint in the matter. If a complaint is received, legal action shall be taken accordingly,” ACP Sadar, Sanjeev Balhara was quoted by Indian Express as saying.