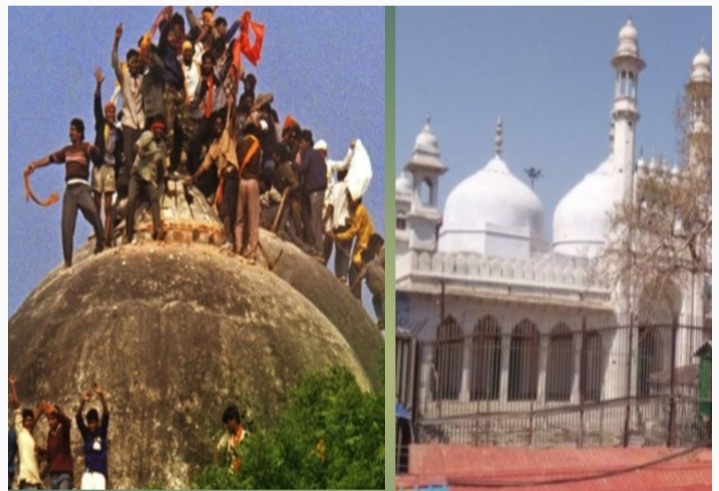 West Bengal violence, Ramzan guidelines and Umar Khalid bail received good coverage this week apart from regular publication press statements by Muslim leaders. For Bengal violence, the papers mostly target BJP, saying the saffron party  can go to any extent to win elections. On Ramzan, top publications carried opinion pieces having a mix of scientific and oriental approaches on fast, even though features having ethical aspects of the ritual of fast were also carried by Inquilab, Siasat, RSU and Munsif among others. While no article or edit on Umar Khalid published this week, most of the papers hailed the judgement. Khalid, who got bail in the Delhi riot case, is unlikely to walk free as he has also been framed under UAPA, the case of which is still pending.

An Ayodhya return? Gyanvapi mosque issue triggered concern from the Muslim leaders with many papers calling  it “a re-run of Ayodhya” designed to keep communal pot simmering. Statements by top leaders of All India Muslim Personal Law Board (AIMPLB) and other prominent community leaders assuring the community of taking all legal recourse to protect the mosque got prominent display. While some Muslim scholars also made impassioned appeal to religious leaders of the community to remain vigilant against RSS design to politicise the issue, many are dismayed at Supreme Court for showing willingness to entertain a plea challenging the Places of Worship Act, saying it will give a free-run to communal forces to keep ratcheting up communal issues. Raising the concern, Masoom Moradabadi in his article (AEM, April 18) observes lack of trust has triggered apprehensions in Muslims, adding that Ayodhya verdict has shaken their faith in judiciary. In this regard, Zafar Agha’s article (Siasat, April 18) suggests formation of a group involving Muslim lawyers and retired officers to fight the case, arguing that the AIMPLB and Waqf boards too incompetent to “outsmart” the Sangh Parivar. He says some non-Muslims can also be part of the body since there are uncountable numbers of people in the majority community who stand firm for truth and justice. Mr Agha specifically calls for setting up a separate body involving people aware of workings of the media to plan communication strategy besides monitoring the case in court. The body should issue statements in modern language instead of articulating oft-repeated slogans in the backdrop of jurisprudence.

Coronavirus: Incompetence is one word to define Modi govt

Prominently three aspects remain in focus on coronavirus coverage: Govt doublespeak, Mahakumbh gatherings and poor governance. Besides, some pieces on flip flop on scientists with regard to the pandemic and vaccine efficacy also come under focus.

Govt doublespeak: In an Inquilab article Hamna Kabeer alleges the Modi of doublespeak, and mocked the PM for holding video conferences for official work but enjoys addressing poll rallies. It further says that the country is facing vaccine shortage, but the PM calls for celebrating Tika Utsav; PM pitches ‘India first’ but exports vaccines at the cost of Indians’ lives. The PM and ministers in non-poll states call for adherence to Covid Appropriate Behaviour (CAB) but they care little for the spread of virus during poll rallies. Siasat edit raises question on limiting presence in mosques when lakhs of people can attend poll rallies. Many articles also poohpooh scientists for their fillip flop on the issues. In an RSU article (April 15) Abdus Salam  writes that flip-flop statements by scientists, heads of states, health bodies, including WHO, are giving sufficient space for conspiracy theories to gain ground.

Appalling silence of media on Mahakumbh Mela: Media come under severe criticism for keeping a mum on the holy dip by millions of devotees in the Ganges at Haridwar during Mahakumbh Mela amid the surge in cases. Apart from some community leaders, the statement by Maharashtra minister Aslam Shaikh significantly covered. Shaikh stated that the they (media) defamed Tablighi Jamaat members who were trapped inside Nizamuddin Markaz mosque due to sudden announcement of “mindless lockdown”, are silent on the scheduled gathering in Haridwar is appalling. All newspapers carried the photographs of the religious event where millions of people gathered to take dip, blowing all coronavirus guidelines in the air. Interestingly, some Islamic scholars through statements abhor the “reactionary” approach urging Muslims to “have pity” on the devotees as they are being “misguided by their electors”. Shakil Hassan Shamsi in an article (Inquilab, April 17) says that Uttarakhand CM might gain popularity for some time for allowing the gathering, but he has in fact pushed lives of millions of devotees at risk.

Poor governance: Poor governance was the main focus of most of the edits and articles, with many analyses concluding that “incompetence” could be one appropriate word to define the Narendra Modi government. RSU edit says that the Modi government, ever since it came to power in 2014, has used the media as a tool to hide its failures. In the coronavirus vaccination issues, the government has again used media advocacy despite the fact that the whole process of inoculation is mired with controversy. The edit says that the Modi govt patted its back on vaccine diplomacy while exporting doses to developing and poor countries, but fell to its knees when vaccine demands peaked in the country. The AEM edit says that “populism may win you (Modi govt) polls but it can’t change ground realities. Further, an article in Urdu Times (Mumbai) by Azeem Shahab says instead of taking a scientific approach, Modi acted like a cult figure asking people to bang plates, clap and light candles etc. The government exported vaccines without assessing domestic needs. Edits of RSU, Inquilab and Sahafat raised the same concern, with all pointing out at the government’s failure to improve the healthcare system even after a year of the pandemic. “Incompetent lots” are in the helm of affairs, says HE edit, adding that they did little work to improve healthcare system even after a year of the pandemic.

Notably, India has exported millions of doses to several nations COVAX – a global initiative aimed at equitable access to COVID-19 vaccines led by UNICEF, Gavi, the Vaccine Alliance, the WHO and others.

SC’s tight slap on the face of Rizvi

All newspapers hailed the Supreme Court’s move to dismiss the petition seeking removal of 26 verses of Holy Quran which triggered an unnecessary controversy. A bench headed by Justice RF Nariman dismissed the writ petition observing it an “absolutely frivolous”. The court also imposes a fine of Rs. 50000/- as costs on the petitioner for filing the petition. Edits in the Sahafat and Siyasi Taqdeer underline the need for popularising the message of Quran. RSU carried several edits and opinion pieces on the controversial petition, tearing apart the Rizvi’s arguments, suggesting the attempts are made at the behest of communal forces to keep Muslims involved in non-issues. An edit in Watan says that the Muslim scholars should come forward and explain Islamic terms in modern idiom and phrases. In this regard, most of the Urdu papers published Arshad Madani’s article wherein the Islamic scholar rebutted Rizvi’s 26 points, one by one.

The writer, a media analyst, can be reached at quamar.ashraf@gmail.

Treating the accused as convicted criminals is a state  violence: All India Muslim Personal Law Board

Muslim Personal Law Board calls for boycott of TV news debates, Muslims back the move