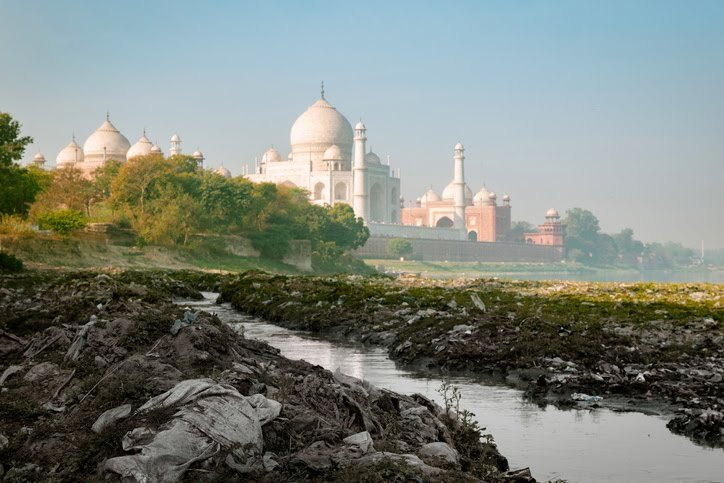 As we celebrate another world environment day during the raging Covid-19 pandemic, questions relating to the safety of the iconic Taj Mahal from pollution are being asked by green crusaders in Agra.

Since 1993, after the Supreme Court intervened and passed a series of orders to secure the sensitive Taj Trapezium Zone, from the ravages of pollution, the union and the state governments have spent thousands of crores of Rupees on a slew of projects designed to bring down the air pollution level.

However, according to environmentalists the positive results of these measures have yet to show. The crude reality is that neither the air pollution level has come down, nor has the general quality of life improved in the 10,000 sq km eco-sensitive zone around the Taj Mahal.

The suspended particulate matter (SPM) in the ambient air continues to remain alarmingly high round the year, and the dry-polluted river Yamuna poses a serious threat to the Taj Mahal and other Mughal monuments along its banks.

“India’s tourism icon and a symbol of earthly love, the 17th century white marble mausoleum, the Taj Mahal, is a victim of both nature and man. If the monument looks sick and pale to visitors, the reason is the dry and heavily polluted Yamuna that once formed an integral part of the Taj Mahal complex,” says eminent environmentalist Devashish Bhattacharya of the River Connect Campaign.

During the scorching summer months the Taj is enveloped in yellowish sand from the neighbouring Rajasthan desert. Any discernible visitor can tell that the summer heat is taking its toll on the Taj Mahal, the timeless monument of love, blasted by sand from the dry Yamuna bed and the dust-laden winds from the Rajasthan desert, Bhattacharya added.

Many scientific studies in the past have identified the gaps left by illegal mining in the Aravali ranges that have raised the SPM (suspended particulate matter) in Agra. Against a standard of 100 microns per cubic metre, it remains as high as 300, touching 500 during summer months. The problem is that sandy particles rub against the monument and leave pock marks that make the surface rough.

The biggest challenge to the environment in the TTZ has been the continuously increasing number of automobiles. The number of vehicles in the past three decades has shot up from thousands to lakhs. Fortunately, a large number of vehicles in the city are now running on CNG (gas), as are the industries that are being allowed to run after the 1996 Supreme Court directive to shut down all coal based industries in the TTZ.

The number of vehicles in the city has shot up from around 40,000 in 1985 when Firozabad too was part of the Agra district, to more than a million now. The opening of the Yamuna Expressway, the Agra-Lucknow Expressway, has increased vehicular traffic, while the pressure of heavy vehicles on the Delhi-Kolkatta and Delhi-Mumbai national highways passing through Agra has increased phenomenally.

The Covid-19 pandemic, though has provided the Taj Mahal some breathing time and a respite, but in normal times, the fatigue and stress from human load has been quite discernible on the fragile white marble mausoleum. From a few hundred daily some decades ago, the Taj today is daily visited by thousands. This number does not include children below 15 years for whom entry is free. For five days in a year the entry to the monument is free for everyone. This opportunity is availed by lakhs of people.

Visitors who see the Taj Mahal for the first time never forget to ask the guides: “Is it turning yellow?” The explanation given by the guides is that it is the natural ageing process and has nothing to do with industrial pollution, as all polluting industries in the Agra region have been shut down by the Supreme Court.

To ensure dazzling whiteness and remove stains left behind by pollutants on the Taj Mahal, originally called Bagh-e-Baahisht, or heavenly garden, the ASI carries out periodic “Multani mitti” (Fuller’s earth) treatment. The white marble surface is also washed with soap and water Fridays, when the monument breathes freely on its weekly off.

When thousands of tourists invade the serene monument every day, leaving behind hand and foot marks on the white stones and tonnes of noxious gases through breathing, the cumulative affect on the fragile structure is huge. Only a few tourists are genuinely aware of the historic significance of the monument and its great heritage value, there are hordes of others who care nothing for the sanctity of the Taj, says Surendra Sharma, president of the Braj Mandal Heritage Conservation Society.

A tourism industry leader, said: “The mausoleum must have been originally designed for 50 or 100 visitors a day. But now there is no end. With the tourism department and the Agra Development Authority making extra efforts to promote tourism, the number will continue to rise.”

While the human load problem is being sorted out by a number of initiatives taken recently, it is the sad state of the Yamuna river at the rear that remains a huge problem defying solution. According to Guides and photographers, the whole area at the rear of the Taj Mahal, already resembles a desert or a vast wasteland, because there is no water in the river. “They have even brought hordes of camels. Perhaps some day, enterprising hoteliers may start desert safaris on the Yamuna river bed,” said tourist guide Ved Gautam.

Though the Archaeological Survey of India (ASI) has restored the Mehtab Bagh at the rear of the Taj Mahal and the state forest department has developed a dense green buffer along the river bank on the opposite side, the Yamuna flows stinkingly.

“If there is no fresh supply of water in the river that touches the Taj foundation to provide a shock-absorbing buffer to insulate the building from seismic movements, the fear is that the monument could tilt, cave in or struggle for stability,” fear local conservationists. — IANS