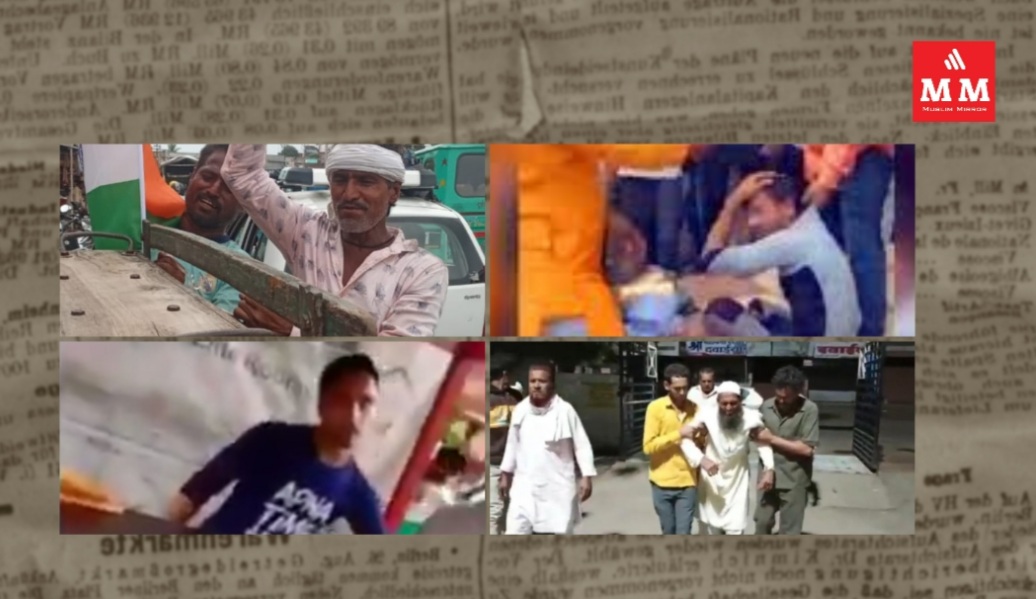 Hate crimes against Muslims are becoming an ugly daily occurrence in India. There are active and widespread anti-Muslim campaigns run by Hindu right-wing parties that criminalize the very existence of Muslims in the country.
In the last two weeks, brave “Hindutva warriors” have assaulted many Muslims, vandalized several Muslim properties, and forced a few Muslims to chant “Jai Shri Ram”.

On August 22, A Muslim man who was selling bangles was thrashed by a group of men in Madhya Pradesh’s Indore city, according to an NDTV report. Shockingly, An FIR was slapped on the bangle seller invoking POCSO. Madhya Pradesh’s home minister, later, on record accused the bangle seller of impersonating as a Hindu and sexually abusing a girl. He defended the attackers by claiming that it was the result of locals’ outrage after learning of the girl’s alleged molestation. Indian TV channels called it a sinister conspiracy against Hindu girls and women and termed it ‘Bangle jihad. They linked it with ‘love jihad’.

Likewise, a Muslim tanga (horse-pulled rickshaw) driver from Uttar Pradesh’s Lucknow was forced to chant ‘Jai Hind‘ and ‘Pakistan murdabad‘ after some right-wing elements claimed that he painted a Pakistani flag on his rickshaw. The rickshaw did not sport the Pakistani flag but an Islamic one. However, the right-wing elements didn’t pay heed and forced him to chant nationalistic slogans.

A police officer from Lucknow, who wished to remain unnamed, told the Print: “I’ve known the driver for a while, he sometimes helps the police with Durga Pooja celebrations as well. He’s a poor chap and hasn’t been able to buy himself a tempo like his peers. The issue was blown out of proportion after powerful people, including the MLA, visited and forced him to put an Indian flag on his tanga. It is an Islamic flag and not a Pakistani flag.”

Hindutva Terrorist are now beating Muslims in the name of Adhar Card.

A poor Muslim Hawker in Baroli village in Dewas (MP) was beaten by two villagers after he failed to show adhaar card to them.

This adhar card propaganda has been started by none other than Home Minister of MP pic.twitter.com/1sFsez6LH4

In another similar incident, a Muslim Dosa seller’s stall was vandalized in Uttar Pradesh’s Mathura, for using a “Hindu name”, multiple “Hindutva groups” said that a Muslim family was running the eatery named after Hindu gods. The name was changed from ‘Shrinath Dosa’ to ‘American Dosa Corner’.

A video of the incident posted on Facebook by Devraj Pandit, the man who was leading the mob. He accused the vendor of “economic jihad”, claiming that Hindus don’t get employed because of people like him.

Devraj appealed to his followers to “rebel against such vendors who seek the aid of Sanathana dharma”. Pandit identifies himself as a devotee of hate preacher Yati Narasinganand Saraswati.

In another incident, A Muslim hawker was allegedly beaten up by two unidentified people in Dewas district of Madhya Pradesh after he failed to show his Aadhaar card. Khan had told NewsClick that he was attacked because of his religious identity. “I was selling eatables in a Hindu-dominated area,” he said. “They also looted Rs 900 cash from me.”

“They were beating me, saying teri himmat kaise hui mere gaon me ghusne ki [how dare you enter our village] and stopped only after I fell unconscious upon the villagers’ intervention,” he said, according to the First Information Report. “They threatened to kill me if I entered the village again before leaving the spot.”

Earlier, on 8 August, slogans for the annihilation of Muslims were raised in the heart of India’s capital New Delhi. Among the slogans raised at the event were “Jab mulle kaate jayenge, hum Ram Ram chillayenge” (When Muslims will be slain, we will chant Lord Ram’s name) and “Hindustan mein rahna hoga, to Jai Shri Ram kahna hoga” (If you want to live in India, you must say Hail Lord Ram).

A Muslim bangle seller was beaten up in Govind Colony, Indore. As per the video, his crime is selling bangles in a Hindu locality. Communal slurs in video.

Police says it will take no suo moto action, but proceed when one party complains. (below tweet)pic.twitter.com/MebaL3Plmi

These attacks are being carried out on a large across India, well-organized outfits have been put into action to keep an ‘eye’ on the Muslims of the country.

With hate preachers like Yati Narsinghanand Saraswati, who call India’s Muslims as the jihadist enemies of Hindus and abuse Prophet Mohammad on live television, the militant Hindutva seems to be getting stronger.
In February 2020, the Human Rights Watch had raised concerns saying that the “authorities in India have adopted laws and policies that systematically discriminate against Muslims and stigmatize critics of the government”.

“The BJP’s embrace of the Hindu majority at the expense of minorities has seeped into government institutions, undermining equal protection of the law without discrimination,” Meenakshi Ganguly, South Asia director at Human Rights Watch, had said.

“The BJP government’s actions have stoked communal hatred, created deep fissures in society, and led to much fear and mistrust of authorities among minority communities,” Ganguly had said.
“India’s standing as a secular democracy is at serious risk unless the government rolls back discriminatory laws and policies and ensures justice for abuses against minorities.