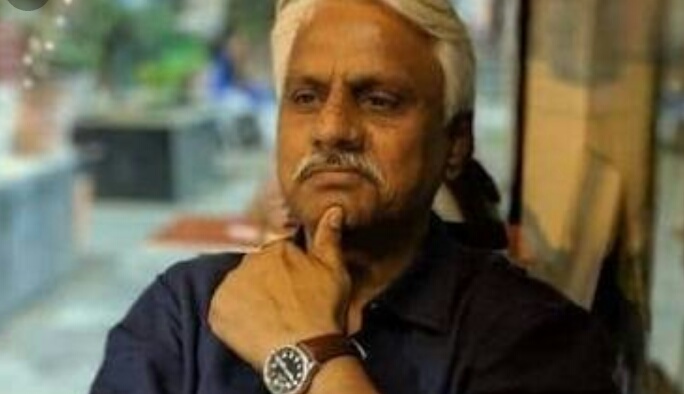 There are many hate factories opened in India whose full time job is to do anti-Muslim anti -Islam propaganda.  One such person whom I have stumbled upon is Pushpendra Kulshreshtha (PK). Watching him on the ‘You Tube’, my summary is, he is a cancer to the society and such people need to be punished.

A little search about him revealed that PK worked as a journalist and was the Bureau Chief Pakistan’s Aaj TV news in New Delhi. It’s due to that he got himself elected as general secretary of the Press Club of India not once but thrice.  It was in his third term during 2009, he was caught to be doing financial irregularities with the Press club. There was an extraordinary general body meeting called by the Press Club members and there were over 200 members who attended this EGM and he was he was disgracefully removed from his post.

Going further deep into him, I learnt that he is from Aligarh and was educated in Aligarh Muslim University. He has good command over Urdu language and has developed oratory skills in this language. He follows the ideology of Veer Savarkar and M. S. Golwalkar. His mentors are reported to be Col. RSN Singh (Ex-RAW Head), Major General G. D. Bakshi retired Indian Army officer, Ajit Doval, (National Security Advisor) etc.

PK addresses the RSS gathering in north India where some 5000 to 10,000 people attend.  His speeches are full of wild allegations couched with lies, unsubstantiated facts, defamation, slander, libel, and against Muslims and Islam. He thinks Islam is the cause of every problem in the world. He wants to wipe out every Muslim from the face of the earth. He thinks Muslims do not belong to this planet and Islam is not a religion.

It seems he is let loose on the internet since 2014 spewing venom against Muslims and Islam. . He has uploaded many videos on the ‘You Tube’ that are blatantly anti-Muslim and anti -Islam. His You Tube shop is only thriving rebuking at Muslims and Islam. He wants either Muslim should converted to Hinduism or be ready to be killed. He is a militant Hindu face on the internet and enjoys a large fan following.

Going by the hits to his videos one gets the impression that he has created a fan club that gleefully watches his videos. Reading some of the comment in the comment section of his YouTube channel, it can be found some persons talking about starting a civil war against Muslims in India.

PK thinks Hindus and Muslims cannot co-exist in India. He supports Mahatma Gandhi’s killing. He also supports the mosque attack in New Zealand. He views are full of prejudice and hatred against Muslims and Islam.

There is little doubt that PK is a cancer for Indian society. He is creating enmity among different sections of the society and a threat to peace and harmony in the country.

Talking to a Supreme Court Lawyer, Syeda Hena Rizvi, I inquired how can this deadly destructive virus can be taken behind bar. I was told that such a rabble rouser can be booked under different sections like; 124 A & 153A & 295 & 295A of the Indian penal code. He can be show click only if some social activists and lawyers may come forward and file case against him.

Explaining about different sections the lawyer said; Section 124A become operative when an offence is committed by words, either spoken or written with intention to bring hatred or contempt, or attempt to excite disaffection among  sections of society. In general terms it is called ‘sedition’ which is a non-bailable offence and punishment ranges from 3 years to a life term along with fine.

The Section under ‘153 A’ deal with acts of promoting enmity between different religious groups and inciting violence prejudicial to the maintenance of harmony in the society. It includes acts of causing fear and insecurity among members of other religious group. This is a cognizable offence and punishment for the same is three years, that can be may extend with fine, or with both.

The Section ‘295 & 295 A’ is operative when someone is found guilty of insulting  other religion or religious beliefs. The said insult may be with a malicious intention of outraging the religious feelings. The offence under section 295-A is cognizable, non-bailable and non-compoundable offence. The person can be arrested without a warrant and punishment is with imprisonment upto two years that can be extended, with fine, or with both.

Looking at the offence committed by person like PK, few cases come to mind that has hogged the media lime light. These are Zakir Naik case who was accused of spreading communal hatred between communities, Akbaruddin Owaisi, who too faced similar charges, and recently of Sharjeel Imam, who was charged for sedition. If we compare these cases with the kind of offence Pushpendra Kulshreshtha is committing without impunity, it sees to reason that it’s high time that such people should be brought to justice. The should not be left to go scott-free and be punished in such a way that may set an example for others.

In sum, in a country like India, that houses different religion and cultures mutual tolerance and understanding of different religion is essential to maintain internal peace and harmony.  The diversified and composite culture of India has to be nurtured carefully as it is essential for the progress and development of the country. In such endeavor it is very important insane people like Pushpendra Kulshreshtha who is creating social disharmony be brought to justice. There are enough legal provisions to deal with such kind of people. And this should be done sooner than later.