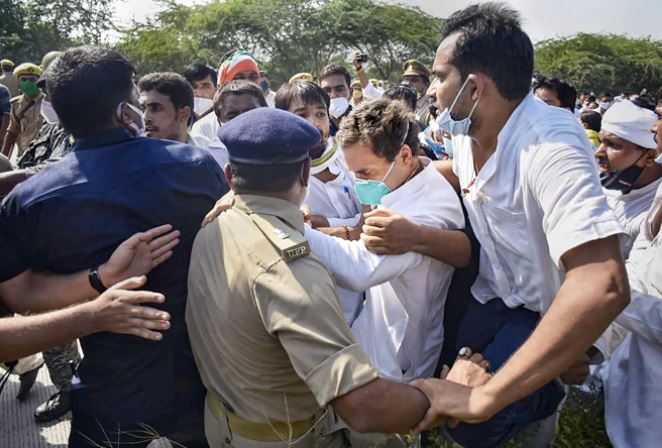 The district administration in Hathras has imposed Section 144 in the area and has banned the entry of all ‘outsiders’ including media persons, in the Boolgarhi village where the 19-year-old Dalit girl was gang-raped and died later.

District Magistrate Praveen Lakshkar said that the Special Investigation Team (SIT), set up to probe the incident, had reached the village and was interacting with the family and other people to record their statements.

“They do not want any disturbance and hence, all entry of outsiders has been stopped,” he said.

However, the decision was taken amid rising public outrage over the incident and after Congress politicians, Rahul Gandhi and Priyanka Gandhi Vadra decided to reach the victim’s village to meet her family.

Gandhis were detained in Uttar Pradesh’s Noida city after an altercation between the police and their supporters.

The girl, who was gang-raped and brutally attacked in Uttar Pradesh’s Hathras district on 14 September, passed away on 29 September in New Delhi’s Safdarjung Hospital. Her body was cremated by the police near the hospital, allegedly without the consent of her family, which further led to a rise in public outrage.

The Uttar Pradesh Police have arrested four people over the incident. However, the victim’s family have said that the police had initially refused to take any action over the same.

Siddique Kappan being tortured in UP jail, says his wife Raihanath Siddique

US media watchdog calls for release of journalist Siddique Kappan