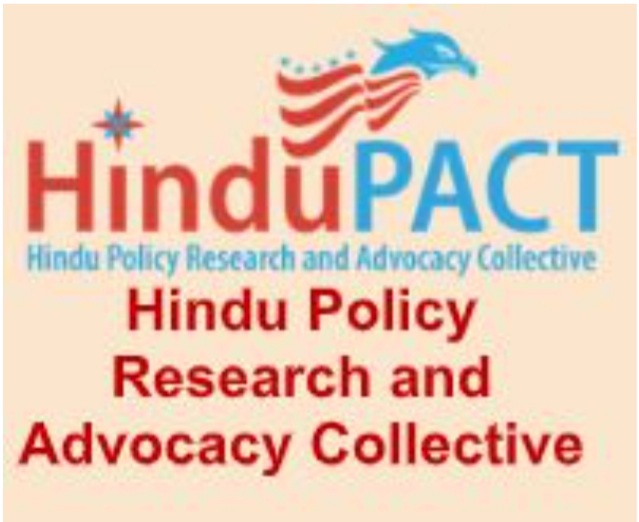 The Hindu PACT while targeting the bill S.B -3384, says, “The Act can be used to legitimize Child marriage and Female Genital Mutilation (FGM) and could be used to discriminate against non – Muslim minorities in the Islamic countries.

It goes on to add, ‘As a nation founded on the Principles of liberty and freedom of religion, the US must maintain its leadership both in our national and international arena and therefore it is important that the language of this bill should reflect on the inclusion and protection of all religious minorities globally,” the Hindu PACT said.

The US House of Representatives last December voted and approved a Democratic proposal for a US State Department office to address ‘anti-Muslim bias’ worldwide.

‘Combating International Islamophobia Act’ allows the Department of State to establish an office to monitor and combat Islamophobia and address related issues. The legislation also seeks to establish the position of Special Envoy who will head the office for monitoring combating Islamophobia.

The bill also requires certain existing annual reports to Congress about human rights and religious freedom in foreign countries to include information about Islamophobia. This includes information about acts of physical violence or harassment of Muslim people. Instances of propaganda in government and media that attempt to justify or promote hatred or incite violence against Muslim religious groups.

The office of the Special Envoy will monitor actions taken by a country’s government to respond to alleged anti-Muslim violence. This will be included in the department’s annual human rights reports. The office shall coordinate and assist in preparing these portions of the reports.

The creation of the Special Envoy will help policymakers better understand the interconnected, global problem of ‘anti-Muslim bigotry’ going on currently in the world and that includes India.

This is an interesting development that needs to be closely watched in the US. Apart from Hindu PACT, there are several other Hindu organizations active in the US. These are Hindu Swayam Sevak (HSS), the international wing of the RSS, the Vishwa Hindu Parishad of America (VHPA), and the Overseas Friends of BJP (OFBJP), and the Hindu American Foundation (HAF). This organization’s objective is to extoll the virtues of the Hindutva ideology and create a space for Hindu Civilization in America.

Interestingly these Hindu outfits often extol the US virtues of civil liberty and religious freedom but they have never spoken about the anti-Muslim bigotry that’s going on in India. None of these organizations has ever made any comment on the human rights abuse in Kashmir and blatant hate propagation against the Muslims in Karnataka.

Another feature of these US-based Hindu advocacy groups is that they call themselves Hindus but have never defined ‘Hinduism’. They have taken it upon themselves to be the representative of the entire caste matrix of ‘Sanatana Dharma.’

These Hindu advocacy groups have also taken on themselves to be the representatives of other minorities, like Buddhists, Jains, and Sikhs, and club them as Hindus.

The fact is the Hindu lobby group in the US is using the word Hindu to promote the political ideas of some Hindus more popularly called Hindutva.  These Hindutva lobbies have made deep inroads into US politics.

These organizations are propping up Hindu candidates to represent ‘Hindutva ideology’ in the US Congress. Tulsi Gabbard, Sri Preston Kulkarni, Padma Kuppa, and Raja Krishnamurti were the candidates in the last US election that were backed by the Hindu lobby groups in America.

These Hindu lobby groups in the US including Hindu PACT proclaim to be involved in the areas of human rights, civil rights, education, etc. They say their motto is to promote dignity, mutual respect, and pluralism along with the well-being of the ‘Hindus.’ However, these are sweet words to hoodwink the American people.

There is a need to keep a close watch on the Hindu lobby groups in the US. It is clear that they are spreading their tentacles in US politics and emerging as a big pressure group there. Their activities need to be monitored and exposed before they make any deadly assault on the American value system.

Syed Ali Mujtaba is a journalist based in Chennai. He can be contacted at syedalimujaba2007@gmail.com