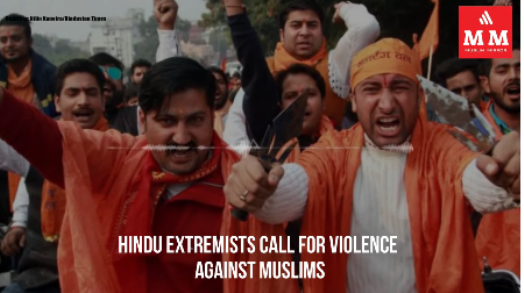 New Delhi: Messages, which call for violence against Muslims, are being circulated on social media through Whatsapp groups’. The messages are being largely endorsed and shared among the Hindu community, instigating them to ‘save their religion’. The messages address Muslims as the enemies of their religion and the country. The language of these messages is smartly articulated to further the message.

One such audio recording, which is a conversation call between a woman and a man, is also being shared on WhatsApp. In the audio, two people can be heard speaking about the “movement” to unite Hindus against Muslims. The audio also reveals how Muslim women are being threatened and beaten in Karnataka by right-wing outfits.

The woman speaking in the audio tells that she hails from the Janakpuri area of Delhi and the other voice introduces himself as Sanjay Vashisht, National Secretary of a Hindutva outfit, hailing from Uttrakhand.

The woman keeps instigating over the call and asks, “What is stopping Hindus from unleashing violence on Muslims? I spend 2-3 hours of my day for this work only to monitor why Hindus in the country are so scared?”

She also encourages violence in the name of Nationalism and says, “What are we creating for our future generations? A Muslim mob will come and kill all of us one day, so we also need to come up with Hindu combat forces.”

The man on the other side says that they are continuously working to create not only forces but an army which will fight Muslims.

Both of them also plan to brainwash and take advantage of underprivileged children to further their agenda against Muslims.

The woman says that they should carry the fire inside their hearts to bring Modi again to power in the upcoming elections in each state.

However, the man sounds hyper-nationalistic and calls out the RSS and the BJP by saying, “How can they let Hindus and Sanatan religion die like this?”

The woman goes on to ask Vashisht that, if there there was any way to throw Kejriwal out of power from Delhi. To which Vashisht replies that they are planning to expand their organization to the National capital where they will be giving training and weapons to youth and they will carry forward the agenda.

In the audio, they also say that Chief Minister of Delhi Arvind Kejriwal is a ‘thorn’ and ‘Python’ and is an enemy of Sanatan Religion and Hindu and should be killed like Mahatma Gandhi, father of the nation.

“Why can’t we kill Kejriwal like we killed Gandhi in the past?”The woman says.

She further says that if she will ever get a chance she is ready to kill enemies of Hindus and the Sanatan religion.

Sanjay Vashisht aims to establish ‘Gurukuls’ in various parts of the country to sensitize and motivate Hindus against Muslims.

In the audio, He openly warns and tells the woman on call that he will finish off people who are raising voice about the recent Mob lynching of Asif Khan in Mewat district of Haryana.

Another message, which went viral on WhatsApp, demands Hindus to stock materials like swords, petrol, diesel, kerosene, bricks, etc; under the garb of using them at various day-to-day occasions. However, the message cunningly ends on the note that “Are you getting the meaning of the message?”

Hate crimes against Muslims in India have reached a new high, every other day stories of Muslims getting beaten, abused and lynched are making headlines. Earlier, this month, the United States Commission on International Religious Freedom (USCIRF) said that the organisation was “concerned about religious freedom conditions in India”.

Many other rights bodies have called for action against the growing intolerance and Islamophobia in India.

Human Rights Watch (HRW), in February, accused the Indian government of adopting laws and policies that “systematically discriminate against Muslims and stigmatize critics of the government.”

“Prejudices embedded in the government of the ruling Hindu nationalist Bharatiya Janata Party (BJP) have infiltrated independent institutions, such as the police and the courts, empowering nationalist groups to threaten, harass, and attack religious minorities with impunity, HRW had said.