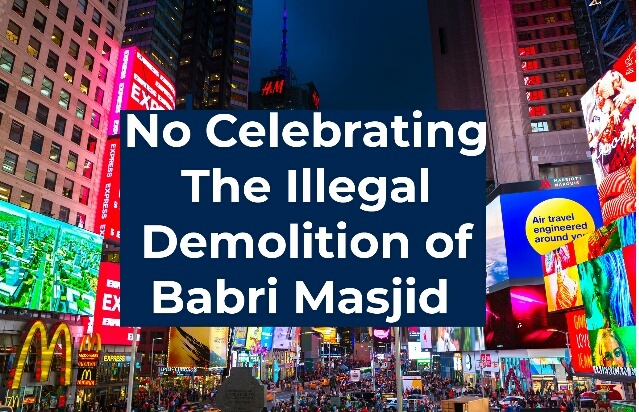 Washington;A coalition of American Muslim organization has announced that Branded Cities, which runs one of the prominent and respectable digital advertisement boards for NASDAQ at Times Square, has refused to run digital advertisements for Hindu supremacist groups. This nationwide coalition of Muslim Organization for the Babri Masjid includes Indian Minorities Advocacy Network- ImanNet, Justice for All, Coalition of Americans for Pluralism in India CAPI,North American Indian Muslim Association NAIMA, Islamic Circle of North America -Social Justice ICNASJ and The International Society for Peace and Justice .

Dr Shaik Ubaid, the President of ImanNet called this a great victory for pluralism, human rights and rule of law. He urged the US government to investigate the flow of funds between militant Hindutva supremacist groups in the US and India as well as the Hindutva attempts to infiltrate the US power centers

ImanNet has also been urging putting pressure on the mayor of New York, the City Council of a New York , the governor, senators and members of House of Representatives.

Apart from this AIM (Association of Indian Muslims)  Indian human rights organizations like Hindus for Human Rights and South Asia Solidarity Initiative (SASI), a New York-based political collective of volunteers, announced that it will hold a disruption protest against the showcasing of Hindu deity, Lord Ram images on Times Square billboards.

“I need a few minutes of your time today to convert despair and sadness into contentment and victory. Hindutva terrorists and supremacists who have killed tens of thousands of Muslims, Dalits, Christians, Sikhs, etc. are going to gloat in Times Square of New York City on August 5th. Instead of feeling sadness or despair we must use this opportunity to educate fellow Americans, especially the politicians and the advertisement agencies, demanding that these ads be dropped. Even if these advertisements are not dropped the overconfident act of Hindutva goons gives us an opportunity to educate influential Americans about the bloody history and bloodier aims of the RSS and it’s fronts like the VHP and BajrangDal.

RSS is trying to make August 5 a holiday for its brainwashed and bloodthirsty followers. It is the day it started its most recent persecution and operation of Kashmiris last year.

This nationwide coalition of Muslim Organization for the Babri Masjid which includes Indian Minorities Advocacy Network- ImanNet, Justice for All, Coalition of Americans for Pluralism in India  CAPI,North American Indian Muslim Association NAIMA, Islamic Circle of North America -Social Justice ICNASJ and The International Society for Peace and Justice.Demand that they drop religious ads by American Indian Public Relations Committee who are glossing over the destruction of the historic Babri Mosque by Hindutva supremacists. Furthermore these  supporters of Nazi-like ideology are committing a fraud by calling themselves American Indians which is a term for  Native Americans .