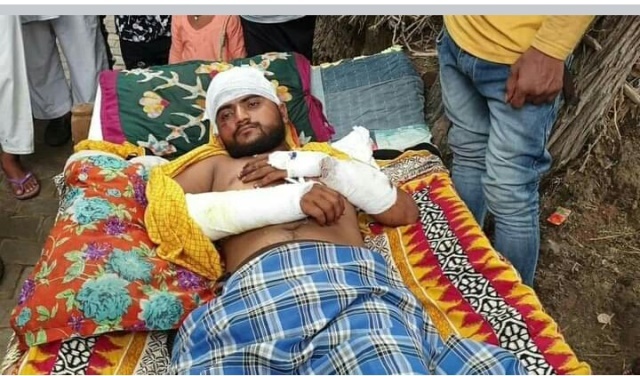 “I begged and told them this is not cow meat. I said if it is, I’m willing to be killed right now. They kept forcing me to chant Jai Shree Ram” said Luqman Khan who survived an attack by Hindutva cow vigilantes a day before Eid-al-Adha in Gurgaon.

The cow vigilantes chased the pick-up truck driven by the victim. NDTV reported the owner of the vehicle said the meat being ferried by Lukman was buffalo meat and he had been in the business of supplying such meat for 50 years.

“There were around eight to 10 men. They shouted at me to stop my vehicle. Fearing for my safety, I sped up. I had just stopped my vehicle in Sadar Bazaar when the men reached me and pulled me out of the truck. They thrashed me with iron rods, saying that I was transporting cow meat,” Lukman (25) was quoted by Times of India as saying. Lukman sustained fractures in the assault.

He was reportedly taken to the Badshahpur area of Gurgaon where he was brutally beaten.

According to reports, the police stood by and did little to intervene even as Lukman was being assaulted. The vigilantes even damaged a police vehicle before fleeing.

Later the police registered an FIR against unidentified individuals at the Badshahpur police station and sent the meat for forensic tests.

Scores of individuals have criticised police and government authorities in relation to the incident.

In a tweet, one Suhani Sharma said, “And the first response of the police was to send this meat for the examination. That’s how normalized we have made mob lynchings”.

Another individual, SD Allan, said that Hindu extremists are showing that “Majority Terrorist and Goons ” are above the law and order.