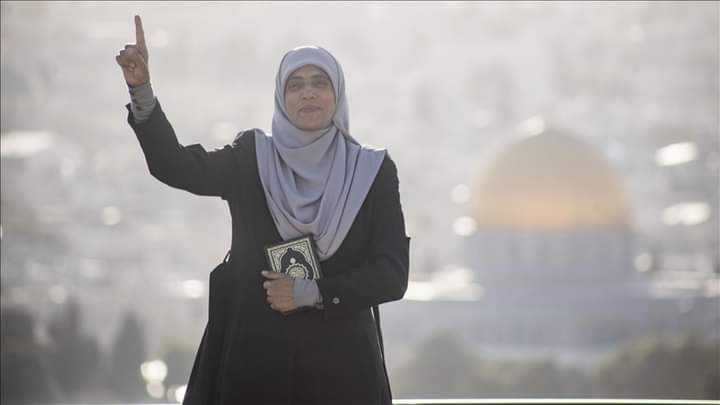 A woman voluntarily standing guard to protect the Al-Aqsa Mosque in East Jerusalem from Israeli attacks has said she will continue to defend the Muslim holy site until she is killed or the occupied Palestinian territories are liberated.

Hatice Huveys, a 44-year-old teacher, recounted that she and her family suffered prosecution and harassment by Israeli authorities while guarding the mosque.

Huveys told Anadolu Agency that she had been detained by Israeli forces 28 times since 2014 but that she shed tears for the first time when they took off her hijab and overcoat while being held in an Israeli prison about four years ago.

She was sentenced to 23 days in jail in 2017 on charges linked to the Al-Aqsa Mosque and protesting the entry of Jewish settlers to the site.

The most recent tensions started in occupied East Jerusalem during the Muslim holy month of Ramadan and spread to Gaza as a result of Israeli assaults on worshippers in the flashpoint mosque compound and the neighborhood of Sheikh Jarrah.

Israeli jets had staged airstrikes across the Gaza Strip since May 10, leaving behind a massive trail of destruction across the seaside territory by the time a cease-fire began early on Friday between Israel and Palestinian resistance group Hamas.

At least 279 Palestinians were killed, including 69 children and 40 women, and 1,910 others injured in Israeli attacks on the Gaza Strip, according to the Palestinian Health Ministry-AA