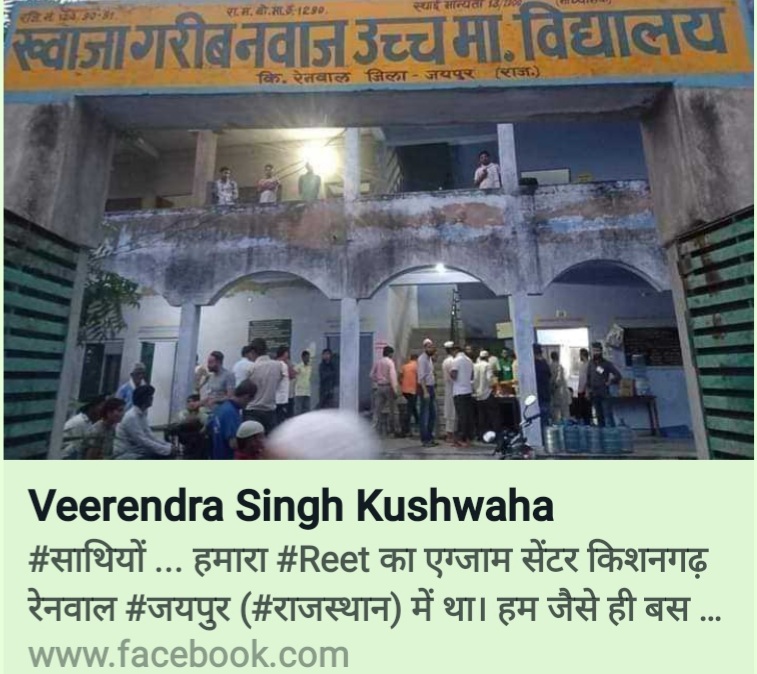 In Rajasthan’s Kishangarh Rainwall, Muslims turned up to help students who had gone to appear for REET 2021 by providing accommodation and food.

The same was jotted down by a Hindu boy on Facebook. In the post which went viral on social media, the boy said that the Muslim men who wore caps received them at the bus station and accompanied them to the Khwaja Sahib International School; they “went to the place of stay and saw that accommodation was arranged”.

“About 500 examinees stayed at that resting place. Great nutritious food was fed at the night and we slept well…when we woke up in the night, we saw that the people who were serving were also guarding us,” he wrote in the post.

“All the examinees were served tea,snacks, bananas etc. on the next morning,” the boy wrote.

Acccording to the boy, the volunteers said that food packets and water will be available for all after the end of the first shift of exams.

“You can write your examinations without any worries,” the Muslim men said to the examinees, according to the boy.

They dropped the examinees to the exam centers and left. The boy said that such arrangements were made for almost 11000 students.

“It’s a slap for all those who divide people on the basis of religion and want to flare communal tensions between Muslims and Hindus in the country,” he said.

“There’s love between the two communities, I felt the emotion while we parted our ways,” his post read.

Muslim man organises last rites of Covid-19 victim, after his son refuses to take his body