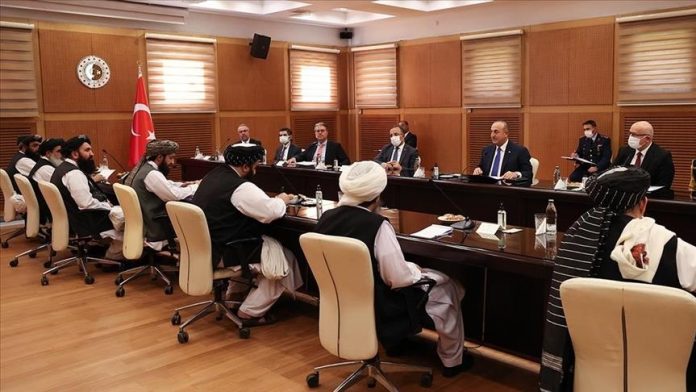 ANKARA:  In talks with the Taliban, Turkey on Thursday reiterated the importance of government inclusiveness for Afghanistan’s unity, said a top Turkish official.

“We once again explained the importance of including people from all ethnic and religious groups, besides the Taliban, in the administration. Especially in these difficult times, this is important in terms of establishing unity and solidarity within the country,” Cavusoglu said.

Muttaqi led a Taliban delegation for an official visit to Turkey to discuss bilateral issues as well as cooperation on the future of Afghanistan.

This is the first high-level contact between Turkey and the new administration in Afghanistan after the Taliban took power on Aug. 15.

Cavusoglu pointed out that the Turkish Maarif Foundation has 14 girls’ schools in Afghanistan.

“They (Taliban delegation) also said today that all of the women, especially in the health sector, have returned to their jobs,” he said.

Taliban officials have pledged to provide the utmost support to Afghan refugees who seek return to the country from Turkey, said Cavusoglu, adding that they also discussed possible measures to prevent a future migration influx.

The minister noted that the top officials from Turkey’s National Defense Ministry, Interior Ministry, and National Intelligence Organization also attended the meeting with the Taliban officials.

He also underlined that the Taliban delegation conveyed requests to Turkey during the meeting, especially on humanitarian aid and continued investment in Afghanistan.

Last month, Cavusoglu said Turkey has contributed to stabilization and development efforts in Afghanistan, including on the education of girls and empowerment of women since the 1920s, adding that Ankara continues providing humanitarian aid through the Turkish Red Crescent.

After receiving information on the latest developments in Afghanistan, Turkey shared its thoughts with the delegation, said Cavusoglu.

As part of “engagement” efforts, Turkey has delivered to Afghanistan a 33-ton humanitarian aid package that it obtained from Pakistan, Cavusoglu said, adding that Turkey now works on a “comprehensive” aid package to deliver.

“Afghanistan’s economy must not collapse. We were saying that the countries that have frozen Afghanistan’s foreign accounts and money should also be more flexible in terms of them (Afghan administration) being able to pay salaries. We received information from them about the latest developments in this regard,” he said.

On Tuesday, Turkish President Recep Tayyip Erdogan had proposed the creation of a working group on Afghanistan under the G20 to address the situation there on the political, economic, and humanitarian fronts.

On fighting terrorism, Cavusoglu underlined that “any gaps left” allow for terror attacks to increase in the country, as shown by the terrorist attack by the Daesh/ISIS group at Kabul airport on Aug. 26, along with its subsequent activities in the capital city and other provinces.

“We see that Daesh/ISIS is strong in Afghanistan,” he added.

Cavusoglu stressed that from the very beginning, Turkey has been providing advice on this issue to the current Taliban interim government, adding: “We have expressed our expectations for the reopening of our consulates-general in Mazar-i-Sharif and Herat.”

“Today, we once again told them (Taliban delegation) about our security expectations for the operation of airports, especially for the start of regular flights, that is, not only our expectations but also the expectations of the entire international civil aviation community,” he said.

The Taliban captured Kabul on Aug. 15, forcing the president and other top officials to leave the country. They have formed an interim government headed by Hasan Akhund.

World powers have called on the group to form an inclusive government that is representative of the country’s ethnic diversity.-AA