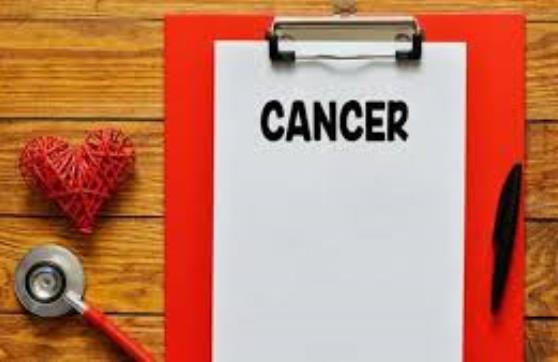 “I think it’s the pollution, and all your Western food like pizza and burgers,” my uncle speculated, without waiting for me to answer. He’d just asked me why everyone around him was getting cancer these days. “Are you guys getting any closer to a cure?”

I don’t blame him. His sister – my amma –  had just finished her last round of chemotherapy. This was his chance to ask these questions.

Growing up in India, we were all taught about infectious diseases like malaria and dengue in school, and everyone knew about heart attacks. Cancer was an obscure disease that affected few. This was only understandable.

In the early 1990s, we had bigger things to worry about: communicable diseases like polio were the major cause of death. India’s public health policies were rightly focused on these threats. In college, I remember an occasional relative or family acquaintance would be diagnosed with cancer. But in the last decade, it seemed like more and more people were getting cancer. Then, one day last, year I received the devastating news that my mom had ovarian cancer.

When I visited her, I was flooded with questions from friends and family (I’m a researcher at the US National Cancer Institute). My uncle wasn’t alone. I was also struck by how similar the situation is in the US, where just about everyone knows someone close to them battling the disease.

So is this true? Are more cancer cases being diagnosed in India today than before? Or is it just the result of better diagnostics and affordability?

A useful starting point is to compare cancer rates in a developing country like India with those in a high-income country like the US. In 2015, researchers estimated that 1 in every 3 individuals in the US would be diagnosed with cancer during their lifetime. This rate is much lower in India: we get a million cases a year from a population of 1.2 billion.

However, look at the data between 1990 and 2016 and then compare the two countries. You will see that cancer has jumped three spots up on the list of causes of death in India but hasn’t budged in the US list. So our intuitions are in a sense true: the incidence of cancer does seem to be increasing in India. 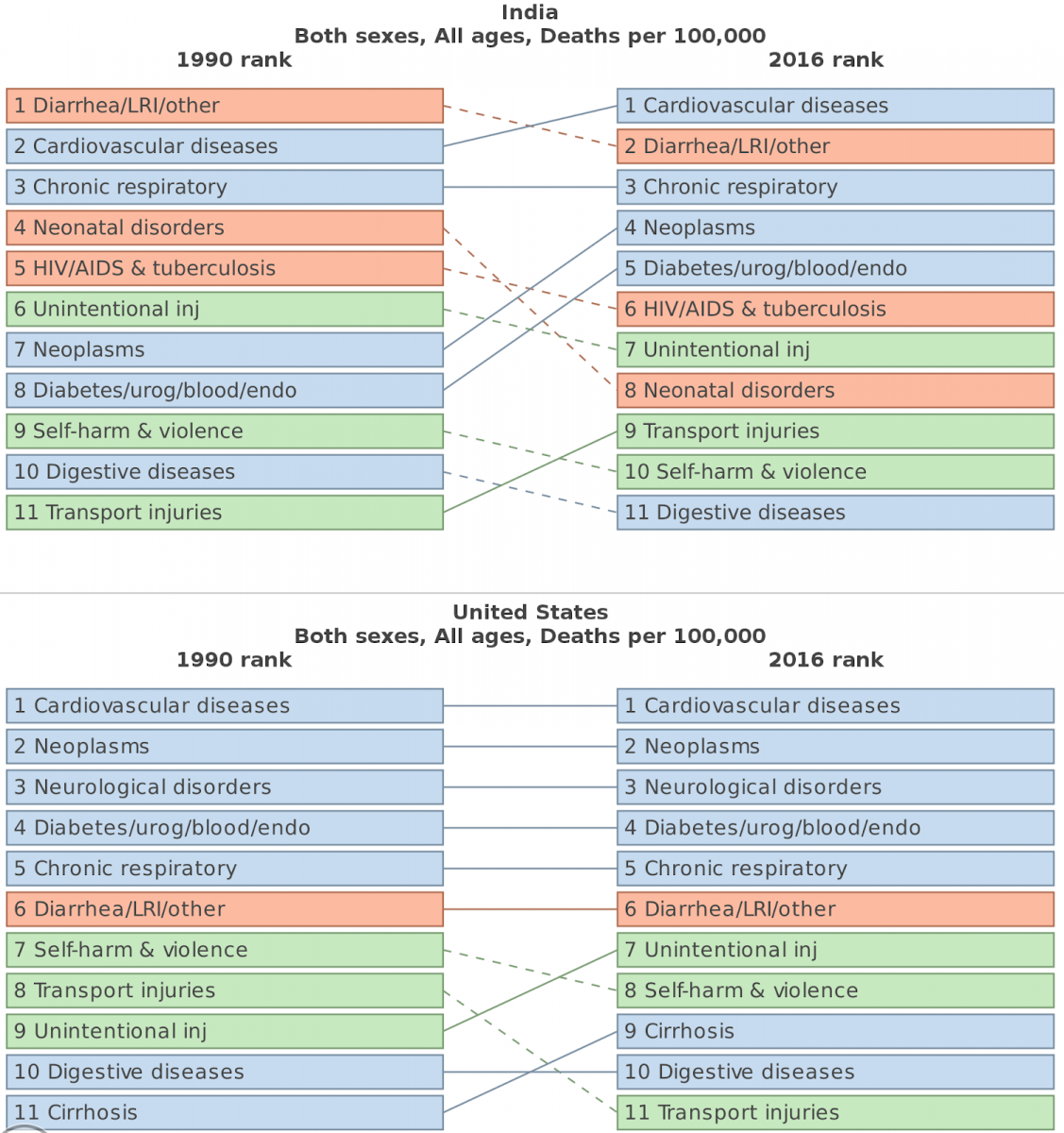 But of course this is not the full picture. Western food, like my uncle claims, is not the major reason we are witnessing rising cancer cases and deaths. In fact, India has more cancers caused by lifestyle choices such as smoking than those due to the consumption of red meat. Understanding why needs us to acknowledge cancer’s inexorable link with life expectancy.

Cancer is, fundamentally, a disease of genetic wear and tear. Over our lifetime, the cells in our body’s organs and tissues are constantly replenished. This is possible because the cells repeatedly divide, making copies of themselves – including their DNA. Each time a cell divides and replicates its DNA, there is a chance that it will make a genetic typo, incorporating the wrong DNA-base at some point in the sequence. This typo is called a mutation.

Most often, these mutations are harmless and are kept in check by various biological mechanisms. But sometimes, a mutation might cause cells to divide uncontrollably and never die. These cells become cancer cells. Uncontrollable division of cancer cells is a major threat to our organs.; It can appropriate all the resources available to the organ, interrupt its normal function and cause it to fail, and spread to other parts of the body. It is the tragic irony of cancer that the selfish cancer cell prefers its immortality over that of the organism.

The longer an organism lives, the more its genetic wear and tear, and higher the chance that there are cancerous mutations in some of our cells. Together with the sheer number of cells in our body (~37 trillion), it’s only expected that the probability of cancer increases dramatically with age. This isn’t a radical or even new idea; we’ve known this since the 1950s. However, we’re only seeing the effect of this in India now.

Between 1990 and 2016, India’s average life expectancy went up dramatically, from the late-50s to the mid-70s, and it’s only been rising. This is mostly due to major efforts to decrease deaths due to infectious diseases, better neonatal care, better health and sanitation, and immensely successful vaccination campaigns like that against polio. And this increase in average lifespan is the major reason we’re seeing more cancer cases in the developing world. In essence, we – as a species – are paying the price of living longer.

The average life expectancy in India between 1990 and 2016. Credit: IHME 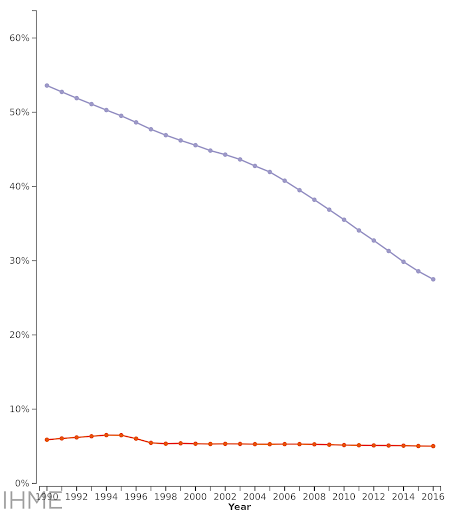 The percentage of deaths from infections and neonatal diseases in India, 1990-2016. Credit: IHME

So unless India starts investing heavily in cancer research and treatment now, we’ll continue to see cancer incidence rise in the next decade. And this trend will continue until further developments in cancer diagnosis and treatment.

If we don’t want to incur a giant bill (literally and figuratively) in the future, we need to use the chance we have to get ahead of the cancer curve. Cancer incidence has plateaued in the West, and the number of people who survive their cancers has gone up almost 20% in the last 25 years. This is mainly due to major advances in the way cancer is detected and treated.

If India also proactively invests in such cancer treatments (like China currently is), up our vaccination rates for preventable cancers like HPV (something we’re woefully behind on) and invest in early cancer detection, we can save numerous lives in the coming decade. India can also save billions of taxpayer rupees this way, since cancer treatments is only getting more expensive by the day.

My amma ended up having stage 1 ovarian cancer – which is quite rare but treatable because it was caught early. After surgery and chemotherapy, she’s been cancer-free for over a year now. We were able to afford private healthcare, a luxury many in India cannot. My hope is that India’s health and welfare ministry, and our scientists, will take the mantle to counter India’s rising cancer burden in the next few years. The time to act is now.

Sri Krishna is a Research Fellow at the Center for Surgery, National Cancer Institute, USA, and tweets at @tellkrish. The views expressed are his own and do not necessarily represent the views of the National Institutes of Health or the United States Government.