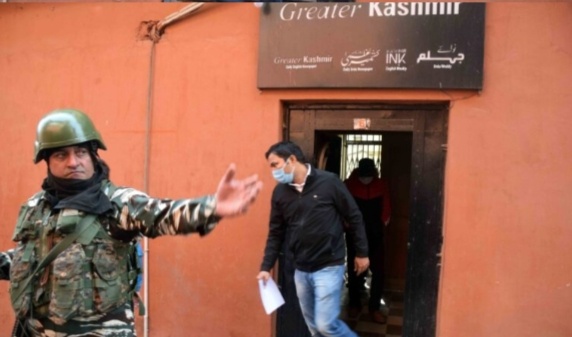 The NIA, country’s premier anti-terror agency, raided the residences and offices of prominent human rights activists Khurram Parvez, the co-ordinator of J&K Coalition of Civil Society (JKCCS), three of his associates and Parveena Ahanger, Chairperson of the Association of Parents of Disappeared Persons (APDP). Both organizations have reported extensively on human rights abuses in Kashmir, including the indefinite administrative detention and extrajudicial execution of human rights defenders, torture of people in detention and the widespread impunity of the security forces in the region. Further raids were carried out on the offices of  Athrout and GK Trust and on the residence of Agence France-Presse’s Kashmir correspondent Parvez Bukhari.

According to a statement released by the NIA, the raids were conducted based on ‘credible information’ that the organizations have been using funding from India and abroad ‘for secessionist and terrorist activities in J&K’, in contravention of the Unlawful Activities (Prevention) Act (UAPA) and Foreign Contribution (Regulation) Act (FCRA), India’s primary anti-terror and foreign funding laws.

“These raids are an alarming reminder that India’s government is determined to suppress all dissenting voices in Jammu and Kashmir. The authorities are evidently targeting these civil society and media groups because of their continued work reporting and advocating for the rights of the people of Jammu and Kashmir despite a harsh communications blackout that was imposed by the Indian government in the region since 5 August 2019,” said Julie Verhaar, Acting Secretary General of Amnesty International.

Verhaar further said, “In a worrying pattern, the UAPA and the foreign funding law are being repeatedly and deliberately weaponized to intimidate, harass and restrict the ability of civil society groups from operating, in clear violation of their rights to freedom of expression and association.”

The raids come after Amnesty International India was forced to halt its work and let go of its employees in the country from 1 October 2020 after its bank accounts were frozen by the government, shortly after it released a Situation Update on human rights in Jammu & Kashmir.

In September 2020, APDP submitted almost 40 testimonies of victims who were subjected to arbitrary detention and torture by security forces in Kashmir, to the Working Group on Arbitrary Detention and the UN Special Rapporteur on Torture. On 5 August 2020, JKCCS published its bi-annual human rights review documenting the extrajudicial executions of at least 32 individuals and the impact of internet shutdowns in the region.

Both UAPA and FCRA have been criticized by UN human rights experts for their overarching nature, which is used to criminalise religious minorities, political dissidents and human rights defenders, he pointed out.

In October 2020, the UN High Commissioner for Human Rights (UNHCHR) Michelle Bachelet appealed to the government of India to review the FCRA and its compliance with international human rights norms, and regretted that it was being “used to deter or punish NGOs for human rights reporting.

Since 2014, several organizations have been targeted under the foreign funding law, including Greenpeace India, Lawyers Collective, Centre for Promotion of Social Concerns, Sabrang Trust, Navsarjan Trust, Act Now for Harmony and Democracy, NGO Hazards Centre, and Indian Social Action Forum. In September 2020, amidst the COVID-19 pandemic, the FCRA was further amended, without any public consultation, to choke civil society in India.

Giving brief details of Government actions, Amnesty said,”On 19 October, the office of the Kashmir Times, a news daily was sealed by the Jammu & Kashmir Estates Department. Since 5 August 2019, Anuradha Bhasin, the editor of Kashmir Times has spearheaded the litigation in the Supreme Court of India against the shutdown of internet and telephone services in Jammu & Kashmir.”

In its Situation Update, Amnesty International India documented physical attacks on and intimidation of at least 18 journalists since 5 August 2019. It also demanded the withdrawal of a draconian media policy which was introduced by the government to create “a sustained narrative on the functioning of the government in media” by checking on “anti-national activities”.

The  Amnesty official said that “By directly attacking and failing to protect civil society organizations organisations, India stands in a clear violation of its human rights obligations, particularly Articles 19 and 22 of the International Covenant of the Civil and Political Rights (ICCPR), to which it’s a state party.”